The final fight of the upcoming loaded RIZIN 11 show has been announced.

Earlier this year, RIZIN brass revealed that they had been in talks with the incredibly fun Ganryujima. Alas; after tearing it up in Ganryujima, Shoma Shibisai will make his RIZIN debut. The striker has been scouted by Akira Maeda and is undoubtedly an interesting addition to the roster.

Across the ring from him will be a Mongolian powerhouse in the form of Boldpurev Unurjargal, a former member of the Mongolian national judo team.

Both guys competed in ADCC Asia Championships five years ago. Shibisai placed 2nd in the 98.9kg division, and Boldpurev placed 3rd in the 99+kg division.

And, with this announcement, the official bout order for RIZIN 11 has been announced. For weeks everyone thought Horiguchi vs. Ogikubo would headline. Turns out that is not the case.

Opening the show will be an absolute banger in the form of Daron Cruickshank vs. Tom Santos. This will be one of six fights that will go on uninterrupted with no intermission. Closing out that six-fight stretch will be another fun one as Satoru Kitaoka faces Diego Brandao.

Following the first intermission, we see a pivotal clash between Takanori Gomi and Melvin Guillard that will open up the following three-fight stretch ahead of the second (and final) intermission of the night. 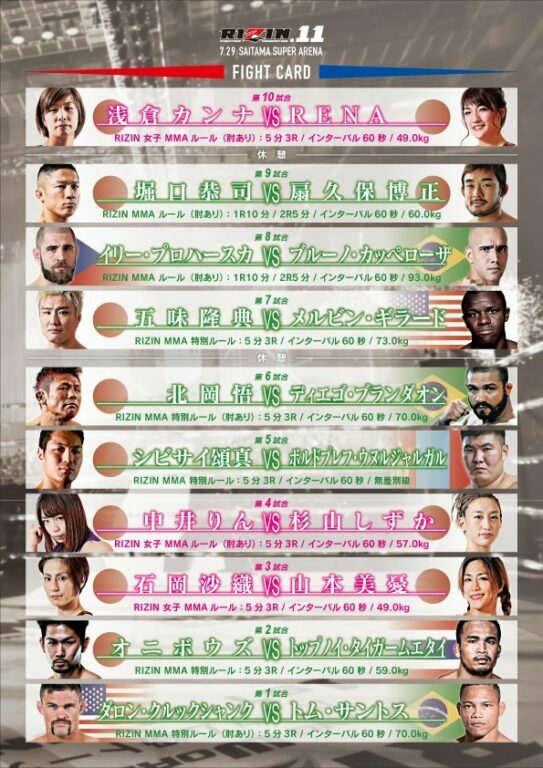 Next weekend! Live from the famed Saitama Super Arena, RIZIN Fighting Federation returns with an absolutely loaded RIZIN fight card. Be sure to tune in, and, per usual, stay locked to MMASucka for everything RIZIN.

Looking for reasons to be excited? Look no further than here!