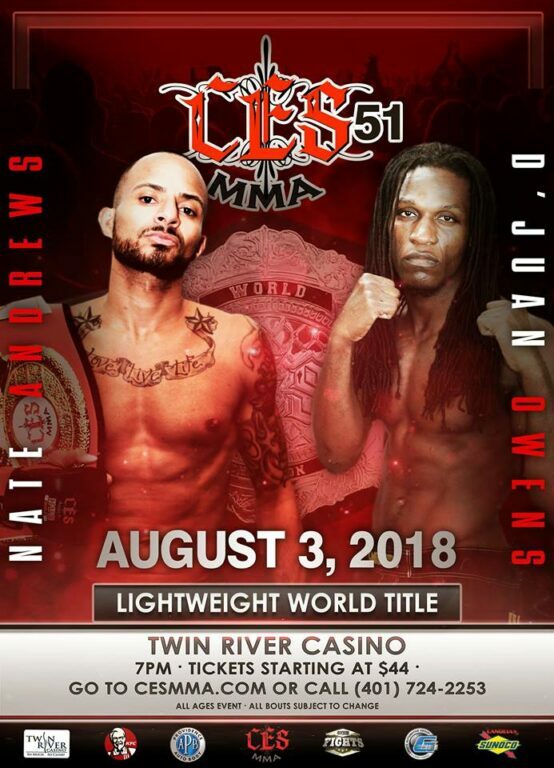 CES 51 goes down in a matter of hours from Twin River Casino in Lincoln, Rhode Island. The card features 11 professional bouts and two title fights. In the night’s co-main event, UFC vet, Sean Soriano takes on Maine’s Bruce Boyington. Soriano looks to pave a way back the big show with a win. Since his UFC stint, he is 3-2, riding two consecutive victories. The night’s main event features Nate Andrews as he looks to defend his CES title for the first time when he faces D’Juan Owens.

Other fights on the card include Connecticut’s Marissa Messer-Belencia vs. Kaiyana Rain. Belencia looks to build off an impressive professional debut, in which she earned a submission finish in the final seconds of the opening round.

Kris Moutinho returns to the CES cage as he takes on Da’mon Blackshear. Moutinho has fought under the CES banner his entire professional career. In his last bout, on CES 50, Moutinho ended a two-fight skid with a 1st round stoppage victory over Al Jones. His opponent, Blackshear is coming off a unanimous decision victory over Aaron Lacey.

Nate Andrews def. D’Juan Owens via  technical submission (triangle choke) at 1:34 of round 1

Bruce Boyington def. Sean Soriano via technical submission (rear-naked choke) at 1:55 of round 2

Jacob Bohn def. Lewis Corapi via submission (triangle choke) at 3:14 of round 1

Hilarie Rose def. Ivana Coleman via TKO (elbows) at 3:14 of round 2

Buck Pineau vs. Fabio Cherant def. Buck Pineau via submission (rear-naked choke) at 2:43 of round 1

Marisa Messer-Belenchia def. Kaiyana Rain via submission (rear-naked choke) at 1:01 of round 3

Jeff Silva def. Jesse Pires via submission (triangle choke) at 1:42 of round 3