Three weeks ago it was announced that sumo star Ōsunaarashi would make his MMA debut at RIZIN 13 next month. Well, today we finally got confirmation as to who “The Great Sandstorm” would be facing.

He draws a very, very infamous name in his debut.

Ōsunaarashi Kintaro (0-0) is a retired Egyptian sumo wrestler. With multiple championships and gold stars to his name, Ōsunaarashi retired in March of 2018. He reached the rank of Maegashira 1 in 2015 and was essentially forced to retire by the Japan Sumo Association after he was in a car accident and caught driving without a license. He is the first sumo competitor from the content of Africa to achieve the top division (Makuuchi) in the sport, having an overall record of 238-178-53.

“The Great Sandstorm” will train with Josh Barnett ahead of his MMA debut. The two met in an exhibition sumo match of sorts a few months back. This fight with Sapp is what Ōsunaarashi wanted all along, as he hopes to avenge Akebono.

Bob Sapp (11-20-1) was once considered a legitimate force in (super)heavyweight mixed martial arts and kickboxing. What the former college football star and NFL’er lacked in technique, he made up for with sheer power.

Nowadays, “The Beast” isn’t much of a beast, and is more known for taking fights for the pay day without even trying to fight in the actual fight – whether it be mixed martial arts or kickboxing. On his current run, Sapp has lost 14-straight in MMA.

“The Beast” faced another sumo star in his first (and only) RIZIN outing back in 2015. He took on Akebono in a Shoot Boxing match. In an odd turn of events, Sapp appeared to actually be trying to win. And that he did. He earned a technical decision win in round two following a few bizarre minutes.

Considering the direction his career has gone – and continues to go – it is easy to dump on Bob Sapp. But this is a man who was once considered a legit threat. He holds two (T)KO wins over kickboxing legend Ernesto Hoost in K-1 competition, and once gave Antonio Rodrigo Nogueira everything he could handle in PRIDE.

Following two spectacular summer shows, RIZIN 13 is scheduled to take place on September 30, live from the Saitama Super Arena. The card is as follows. 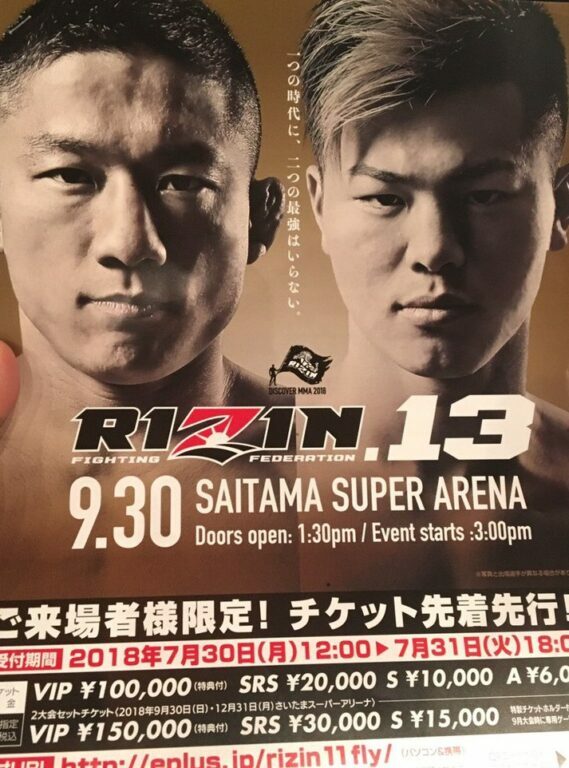