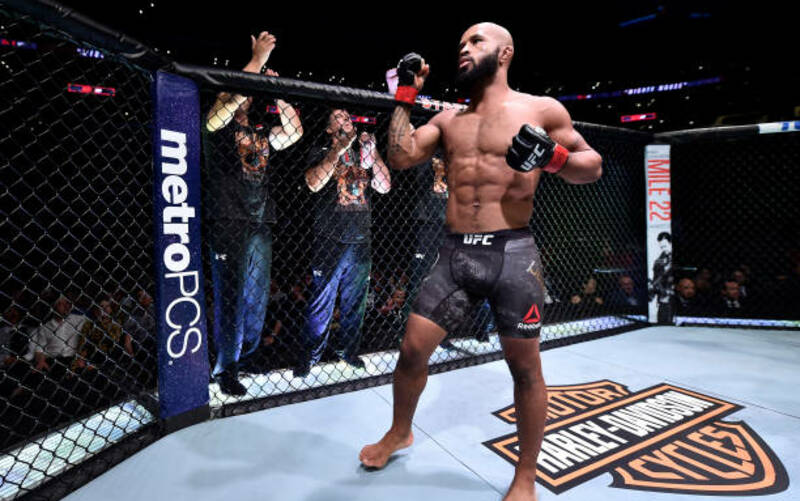 As the dust continues to settle following the first ever ‘trade’ in mixed martial arts history, ONE Championship CEO and founder Chatri Sityodtong welcomed the newest addition to the promotions flyweight division, Demetrious Johnson at a late night press conference with media members from across the world.

To begin the press conference, Sityodtong made a brief statement regarding his pleasure in signing the former UFC flyweight champion. His remark was short before handing the floor to the newest addition to ONE Championship’s growing roster.

Demetrious Johnson to ONE

“It’s a huge [win] for all parties and I think bigger things are going to be down the pipe as a result.”

Johnson followed with a lengthier statement yet still kept his opening remarks in the same reserved tone.

“I am very honored and grateful to be able to be a ONE athlete. It’s a huge move on my part and for my career. I’m looking [forward] to get over there in Asia and test my skill set against the best of ONE Championship in the flyweight division. I know those guys are animals, I know [Adriano Moraes], all the other guys are beasts and I am looking forward to get in the ring with those guys to see how well I fair.”

Within Johnsons opening remarks was an important sentiment about his competition future. Currently, Johnsons Jiu-Jitsu coach, Bibiano Fernandes commands ONE Championship’s bantamweight division as its champion. Like the UFC flyweight run of his friend and student, Johnson, Fernandes defended his bantamweight title an incredible 7 times. On top of his impressive number of title defenses, Fernandes is undefeated in his time with the organization.

Johnson made it clear later in the press conference that his goals would not overstep those of his coach, teammate, and friend Bibiano Fernandes.

“I am a man of respect, and I respect [Bibiano Fernandes] as a friend and teacher. He’s my jiu-jitsu coach. So when he’s done with his reign, I will see where I am at in my career and then I will decide where I’ll go. [The] long-term goal is obviously, stay healthy and keep on competing. If I am able to capture the ONE Championship flyweight title, then I would like to defend it as many times as I can. Then, down the road, I’ll sit down (with) my coaches and I’ll see the higher-ups at ONE Championship. Then set what I’ll do next. But first things first, get over there, get my first competition under my belt in Asia and then go from there”.

For Demetrious Johnson, the possibilities at ONE Championship are nearly endless. Both Sityodtong and Johnson were excited at the prospect of the new flyweight competing in different combat sports. Also, on this new roster, every match-up is fresh. Already a list of talented flyweights lined up for their chance at the newest signee.

Kairat Akhmetov already put his name on the growing list of suitors. The experienced fighter issued a challenge to Johnson following the news of the finalized deal on Instagram.

Chatri Sityodtong himself put Akhmetov’s name on a list of fighters he would like to see greet Johnson to the ONE roster. The CEO identified as possibilities for Johnson’s debut, during the press conference.

“I think there are a few names for DJ off the bat. We have Kairat Ahkmetov, who’s 25-3, we have Adriano Moraes who’s 17-3, even Danny Kingad, Gianni Subba. There’s a whole list of flyweights who would be an excellent matchup with DJ. I have to sit down with DJ as well in terms of timing and again I want him to come in 100% healthy, nothing short of it.

Of course, there is a lot of expectations around the world watching DJ compete in ONE Championship for the first time. So he’s got to be 100% ready. And these are some really, really tough guys that will, again, give DJ an entirely different look than what he’s used to. So he’s got to come well-prepared. Obviously, Geje (Eustaquio) is also in the mix. There are no plans I think. DJ said it right, he’s the new kid on the block. He’s the new guy in (the) ONE Championship flyweight division and he’s going to have earn his way to the top. He is not going to get an easy pass or anything. We are going to feed him right away to the sharks and see how he does.”

The executive also claimed that ONE Championship’s long-awaited inaugural Japan event made sense for the debut of Johnson as well as another newly signed name, Eddie Alvarez.

“We definitely want to stack [The inaugural Japan event] with big names. So probably Eddie [Alvarez] will be on it, DJ or both. We’re going to do it at Ryoguku Kokugikan which is the symbolic home of martial arts for Japan. Its where the Sumo world championships are held and in a really historic building. We chose that because we wanted to honor the real Bushido way of martial arts in Japan.”

The future is bright for Demetrious Johnson and ONE Championship. There are many different paths for the former UFC champion to take. In this new market, he can expand into the multi-faceted star which he has the potential to be. All that he must do now, is choose a path and continue to blaze a road for athletes to follow behind.