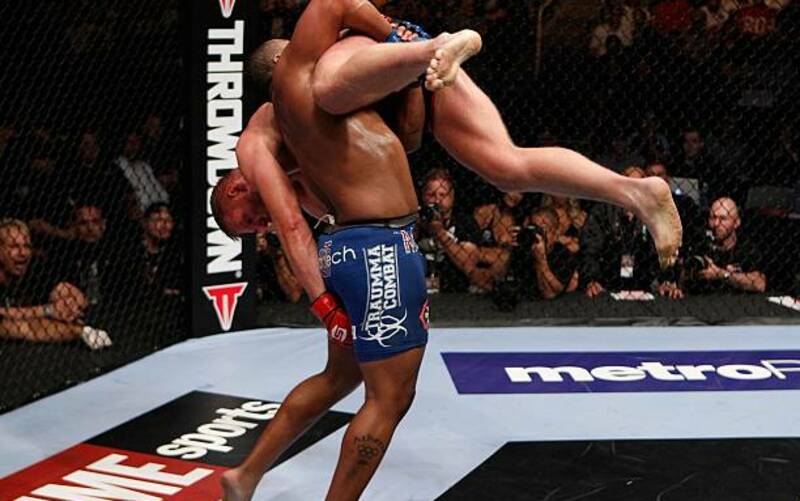 Sit back and enjoy the Daddest Man on the Planet tossin’ around the big boys. Daniel Cormier is good at wrestling.

Inside trips, lateral drops, head outside single lifts and crackdowns, DC does not limit his options when it comes to grounding his opponents. From Strikeforce (RIP) debutant to UFC champion, relive the wrestling of Daniel Cormier’s MMA career.

Read on if you’d like to hear a rant about DC’s credentials in amateur wrestling.

While you’re here, let’s talk about DC’s wrestling credentials in multiple styles. The man began his journey in Louisiana, a state with undetectable levels of wrestling tradition. In hindsight, it makes sense that he won three state titles while suffering nine total career losses, seven of those coming his freshman year. The other two were technically losses because Cormier defaulted out due to injury, but he was not defeated by another wrestler once after his freshman year.

But again, that was Louisiana. What we should really be looking at is his run at the Cadet (16 and under) Greco-Roman World Championships. This kid out of nowhere Louisiana gets to the world stage in a style dominated by Europeans, and wins bronze. For context, the gold medalist Youri Patrikeev from Armenia went on to win Olympic medals at the Senior level (grown-ass adults).

Like many wrestlers from under the radar states who did not compete at national tournaments, (despite his WORLD BRONZE MEDAL IN GRECO), Cormier was not recruited by a Division 1 program and competed in the JUCO circuit through his community college.

Maybe he had bad grades. In his two years in JUCO, he won two national championships, never lost, and pinned half of his opponents. Now he had their attention. For his remaining college eligibility, DC was recruited by the greatest American (freestyle) wrestler of all time, John Smith, head coach of the legendary Oklahoma State Cowboys.

The Cowboys are notorious for enforcing brutal weight cuts. After competing at 197 pounds in JUCO, DC slotted in at 184 for his junior season and D1 debut.

(Guess who Okie State was starting at 197? Mark Munoz! He placed third that year.)

At 184, Cormier had the misfortune of being at the same weight as the greatest American (folkstyle) wrestler of all time, Cael Sanderson.

Cormier had an amazing season, earning the #3 seed at the NCAA tournament, slotting him opposite of Sanderson. Unfortunately, DC finished one win shy of becoming an All-American, losing in the infamous blood round (round of 12, consolation quarterfinals, what have you).

I have the 2000 NCAA D1 brackets here if you’re interested.

His senior year, Cormier was a different animal, adjusting his weight to stay at a healthier 184. Munoz won the title that year at 197. DC earned the #3 seed once again, winning his first three matches by pin, technical fall (up by 15 points or more, it’s essentially a mercy rule) and then lopsided major decision 16-4.

In the semis, he faced off with future Olympian Andy Hrovat.

He pinned him off a lat drop, probably the coolest way to punch your ticket to the NCAA finals.

I for one am shocked a Greco world medalist is good at throws.

Look how slim he was. Diet Cormier.

In the finals, he, of course, met Sanderson, for the sixth time in his career. Cael Sanderson never lost a college match (after his redshirt season, of course). DC fought hard, but dropped a respectable 8-4 decision to take second and become an NCAA D1 All-American. Six of DC’s ten NCAA losses are to Cael.

After college, Daniel Cormier began his transformation into the DC we all know and love. Following two seasons of cutting to 184, he competed at 96 kg (international styles hate freedom and insist on using the metric system), which is about 211 pounds.

DC immediately outperformed his college career, winning international freestyle competitions left and right starting in the early 2000s. He placed fifth at his first crack at the World Championships in 2003.

Get this, from 2003-2008, DC won a spot on the World and Olympic team every year. Let’s call that five consecutive national championships over the best wrestlers in the country, at a much higher level of competition than the NCAA. Take that Cael.

At the 2004 Olympic Games, DC lost in the bronze medal match and went home without any hardware. Here’s who he lost to:

That was first. DC wrestled back to the bronze medal match, where he met:

What kind of sick, twisted bracket is that? That’s what it means to win a world or Olympic championship, that’s who you have to beat to even medal. Think about that.

Cormier struggled to find his form against foreign competition again until 2007, when he competed in the World Championships in Baku, Azerbaijan.

DC won his first two matches before falling to the Iranian, who went on to take second after losing to our old pal Gatsalov.

This time, Cormier wrestled back against a slightly easier draw, taking out Japan and then the former World Bronze from Kyrgyzstan to take third.

Why are you telling us this?

Not a lot of wrestlers make Olympic teams. Less even actually get to go to the Olympics, requiring placement at qualifying tournaments to earn their spot in the tournament. Being an Olympian for the United States in wrestling is an unbelievable achievement.

But to constantly refer to DC as an Olympian is actually underrepresenting his accomplishments. His strength of competition, both in college and internationally, was absolutely absurd. In college he had Cael Sanderson to reckon with. Domestically he was fending off monsters like Steve Mocco and Damion Hahn. Then he was running into some of the greatest of all time in world history, men like Gatsalov.

At a time where Team USA had their struggles internationally, Daniel Cormier was a leader. He was Olympic team captain in 2008. His world bronze finish, coupled with his sheer level of dominance over American wrestlers, in my mind, is a far greater achievement than making the Olympic team twice. Get it right, commentators.

This should also add a layer of understanding when you see DC break down and cry after his championship wins and losses. He’s been struggling to get to the top for decades. Facing unbelievable hardship. Speak to any of his teammates, anyone that knows him, there could not be a harder worker, a greater leader of men.

Which is why it stings so much more when he comes up short against Jon Jones, one of the most prolific fighters of all time. A legend among legendary competitors. It’s the same story as before, transcendent champions block his path to pure, undisputed gold.

If you look into DC’s personal history, he has been dealt a horrific hand in life. His father was murdered on Thanksgiving day. His first daughter was killed in a car accident. Trauma at that level would break many.

Derrick Lewis is heavyweight MMA in a nutshell. There is no process to his style, he often appears to be the worse fighter, in worse shape, but he knows how to win, and it’s always ridiculous. Derrick is a great, hilarious man, with a heart of gold. He earned his shot.

But with all of this in context, how can you root against Daniel Cormier? He has paid his dues and then some, let him have a happy ending. Considering how his detractors discredit his career from losses to Jon Jones, what do you think would happen if he was retired by Derrick Lewis? It would be funny. He doesn’t deserve that.

This is MMA. Bad things happen to good people. There is no sense of karma, at least not in a consistent way. It’s high-risk competition and anything can happen.

I understand it’s a lot to ask for, but a legend go out on top, just this once?

You better not come back Georges.

If you dig wrestling and want more, here are Part 1 and Part 2 of a Dominick Cruz Wrestling GIF Highlight and Study.