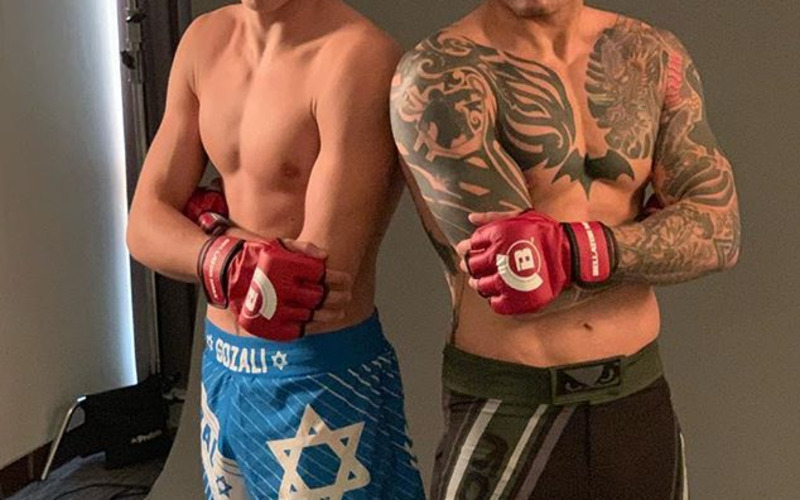 Haim Gozali (8-5 MMA, 2-2 BMMA) is a local legend and a pioneer who has competed in BJJ tournaments worldwide. He has promoted local MMA events and is an active fighter on Bellator’s welterweight roster at 45 years old. Haim’s career began as early as 1998 when he faced the notable Carlos Newton.

In 2006, he faced Jacare Souza. Gozali, a Brazilian Jiu Jitsu 4th degree black belt by Renzo Gracie, joined the Bellator cage two years ago, and has never missed a Bellator appearance in Israel since then.

“This is a special occasion for the both of us,” said Haim, “We are both lucky to have this age difference which we can both compete on the same card”. In the co-main event of the evening, Haim will be facing Ryan Couture. Gozali lost to Couture at Bellator 108  at Madison Square Garden. Gozali plans on having a different outcome.

“In our last fight, Ryan was not aware of what I had to overcome,” said Gozali senior. “Although [Couture] is correct by saying that a fighter cannot change much at 45 years old, let’s see how he deals with a whole arena cheering for me. This time we are fighting in my backyard, not his.”

Before the main card, the preliminary card will feature Haim’s son, Aviv Gozali. At the age of 17, Aviv will square off against another newcomer, Anton Lazebnov. “I have been cornering my father’s fights in some big events, therefore I am familiar with the atmosphere”, Aviv recalls and adds “I am not stressed about the fight, nor about the stature of the organization”.

Aviv is mainly a BJJ player and won several competitions in his age group, he is prepared for all situations. “I have had a 4 month training camp, I am ready to go wherever the fight will take place”. In preparation for these matches, both fighters not only visit American Top Team headquarters, but sharpen their jiu jitsu skills at the Renzo Gracie Academy as well.

Dynamics of a fighters family

Unlike in past preparations, Haim is taking a new approach. “This time, I didn’t train Aviv. We were both each other’s sparring partners but having two separate training camps” Gozali said. One might wonder about the dynamic between a father and his son, who are both preparing for a fight on the same evening.

You might imagine that they talk nonstop about their upcoming fights during dinner, but Haim provides clarification on this. “We do not have dinner together. After all, we have two different diets because I fight at welterweight and my son will fight at lightweight. We are both simply focused on our own fights”.

How does a father allow his son to compete at such a young age? Haim says, “Aviv has been telling me that he wants to have an MMA fight for three years now. My only response to him was – wait until you are a bit more mature, then we’ll talk”.

That day has finally arrived for the young Gozali, who graduated from high school in the spring. Currently, Aviv is about to be drafted to the Israel Defense Force as part of his mandatory military service. “I am hoping to receive an athletic exemption from the army, so that I can train full time and further develop my career”.

That being said, Aviv has high aspirations: “My father is my obvious role model, but if I have to pick a fighter other than him, then Jon Jones would be the one I would try to mimic throughout my career. In the best case scenario, you will see me dominating the Bellator lightweight division and hopefully holding that belt in a few years”.

Losing is not an option

For Haim Gozali, the task at hand won’t be easy. He will be looking, not only to avenge a loss, but at the same time, coping with the high expectations. “Imagine if Israel goes to war. If the county loses, then it ceases to exist. I go to this fight with the same mentality. Losing is absolutely not an option”. With that high level of commitment and dedication, the entire Israeli MMA scene is put to the test in front of the entire world.

Regarding the evolution of the local scene, Haim provides with valuable insights “The potential is there, for sure. The facilities and the coaching staff are at the top of the game. For now, we are lacking quality competition from within. Bringing Bellator to Israel is crucial for the Israeli fighters’ ongoing development. As long as we can keep on selling tickets, as long as we keep filling the seats at the Menora Mivtachim Arena, then fighters can make a living and maintain a professional lifestyle”.

What does the future hold for the Gozali family? Aviv is only starting his journey, but his presence at the gym from such a young age is always promising. Haim, on the other hand, is showing no signs of slowing down: “retirement hasn’t crossed my mind, not even for a second. I wish to be victorious in this fight against Ryan, and then I will think of my next opponent”.

This historical moment will occur under the Bellator umbrella. Win or lose, no one will be able to take away the remarkable achievement of a father and a son fighting professional MMA fights on the same card, on the same extraordinary evening.

I'm a European based pro-MMA reporter. My writing revolves around emerging trends and news in the MMA world, focused around in-depth op-eds and opinion pieces.
BJJ practitioner, MMA addict since 2003.