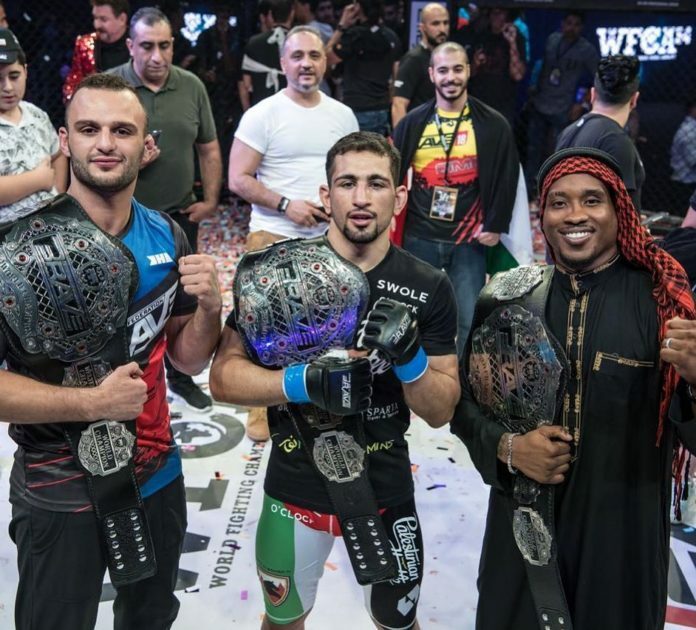 Over the last two years, the Brave Combat Federation has put on eighteen events and has crowned champions in multiple weight classes. Coming off of the successful Brave CF 18 event from last Friday, which saw three title contests in one night, I felt it would be a good time to look at possible matchups for each titleholder in 2019.

While the title says champion Alkhasov did not capture the inaugural flyweight belt with his win over Marcel Adur. The former ACB titleholder missed the mark on the scales, resulting in the victory being classified as a non-title triumph. Now known as the uncrowned flyweight champion Alkhasov will no doubt want to get back to action as soon as possible. The only fighter currently signed to Brave that could make a claim to being the number one contender is 10-time BJJ World Champion, Bruno Malfacine. Sporting a professional record of 3-0-0 Malfacine may not be the best choice right now, as he is still very early into his MMA career.

With the UFC reportedly removing the 125-pound weight-class and releasing most of the top flyweight talent competing for the industry-leader, Brave could be in the market for several free agents going forward. The obvious first choice is former two-division LFA champion and multi-time IMMAF Gold Medalist Jose “Shorty” Torres. Torres expressed interest in signing with Brave in several media appearances since his release from his UFC contract. “Shorty” was also part of the commentary team for the flyweight bout between Alkhasov and Adur. He is just one potential free agent that could appear under the Brave banner in 2019 and would be a great choice in the promotion’s next attempt to crown a flyweight champion.

Loman defended his bantamweight crown for the second time in 2018, outpointing Brazil’s Felipe Efrain over five rounds to retain the belt he captured at Brave CF 9 last year. Although the promotion recently picked up EFC bantamweight champion JP Buys, I don’t expect him to get a title shot in his next appearance. The Torres signing could affect the bantamweight division as well, as “Shorty” has held titles in both the flyweight and bantamweight categories for the LFA organization.

Outside of Torres, my choice would be Canadian bantamweight Louie Sanoudakis. Sanoudakis (7-1-0) made is promotional debut at Brave CF 16, outworking top contender Nawras Abzak to notch the biggest win of his eight-fight career. Now with Brave and on a two-fight streak expect Sanoudakis to get a shot a Loman in his next fight, or at the very least be one win away from a championship appearance.

After a career in Bellator that saw him go 8-3-0 for the North American outfit, Jenkins tested the free agent market. He would eventually find his way to Brave. The high-profile signing was one of the biggest (at the time) for the Bahrain based company. He debuted in the co-featured bout of Brave CF 16, where he wrestled the featherweight title away from Elias Boudegzdame, snapping the former champion’s six-fight win streak in the process. Now holding the featherweight belt of a major MMA organization, Jenkins awaits his first challenger.

On the surface, the obvious frontrunner would have to be Jeremy Kennedy. Kennedy (12-1-0), a former Battlefield Fight League Featherweight Champion went 3-1-0 under the bright lights of the UFC before signing on with Brave. He was scheduled to compete in an alternate bout for the recent PFL featherweight tournament but was forced out due to his contract situation with Brave. He revealed soon after that he was hoping to return to the UFC, as his Brave contract allows him to return if the opportunity is there.

Due to the nature of Kennedy’s contract, don’t expect him to get the first shot at Jenkins’ belt. The two most likely candidates would be CM System athlete Gabriel “Fly” Miranda (13-4-0) and Dagestani featherweight, Marat Magomedov (10-1-1). Both competitors are on similar streaks with Magomedov enjoying a three-fight run, and Miranda picking up his fourth straight victory at Brave CF 15 in Columbia. It is anyone’s guess who would get the next shot but I would lead towards Miranda. “Fly” looked impressive in his Brave debut, needing only 1:12 to submit Fernando Noriega back in September.

The newly crowned 155-pound king of the Brave Combat Federation crossed over to the sport of MMA after compiling a 22-1-0 record in Muay Thai. In his debut he entered into the Desert Force Featherweight Tournament, stopping all of his opponents in the first round to earn the tournament championship. Al-Selwady continued his winning ways in Brave, finishing four out of five of his showing thus far. Most recently he defeated former UFC contender Lucas Martins, hurting him on the feet before an injury forced Martins to tap at 2:17 of round one.

Luan “Miau” Santiago is the obvious choice for Al-Selwady’s first title defense. Santiago (13-3-0) was on his way to winning the interim lightweight strap earlier this year, but broke his arm in the fifth round, prompting a stop to the contest, awarding Lucas Martins the title in the process. The 2016 Brazilian Fighter of the Year award winner recently earned a judge’s decision with a hard-fought performance over Djamil Chan, a top contender himself. “Miau” is 3-1-0 in Brave, with two first-round finishes to his name. He has reeled off 10 TKO victories out of his thirteen wins, eight in the first round. I would expect Santiago to appear opposite Al-Selwady sometime in 2019.

The welterweight division was put on notice at Brave CF 16, as Jordan’s Al-Silawi destroyed former titlist Carlston Harris in the first round to capture the welterweight strap. Riding an impressive eight-fight streak that includes wins over the aforementioned Harris, Tahar Hadbi, David Bear and Carl Booth, “Jordanian Lion” has proven to be the king of Brave’s welterweight category. The number one ranked 170-pound competitor in the Middle East may already know his opponent. Abdoul Abdouraguimov (9-0-0) has been tearing it up since debuting in 2016. The Russian captured multiple titles on the regional scene on his way to Brave. He holds notable victories over former UFC fighter Viscardi Andrade, Sidney Wheeler and Rodrigo Cavalheiro.

Brave is expected to crown an inaugural champion in the 185-pounds division sometime in 2019, and the contest may be one that Brave Nation has already witnessed. Ikram Aliskerov (6-0-0) will likely rematch South Africa’s Chad Hanekom (6-1-0), this time with gold on the line. The pair first met at Brave CF 10, with Aliskerov edging Hanekom on the judges’ scorecards. Hanekom, a former professional Rugby player has picked up two victories since the setback. Most recently knocking off top contender Leon Aliu to claim the #2 spot at Middleweight. Two-time Combat Sambo World Champion Aliskerov has finished three of his four opponents in the first round under the Brave CF banner, including a submission triumph over former EFC Middleweight champion, Jeremy Smith. 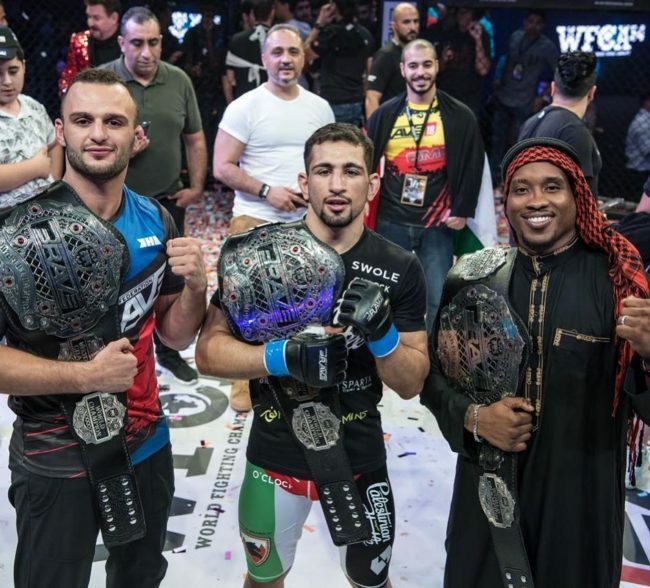