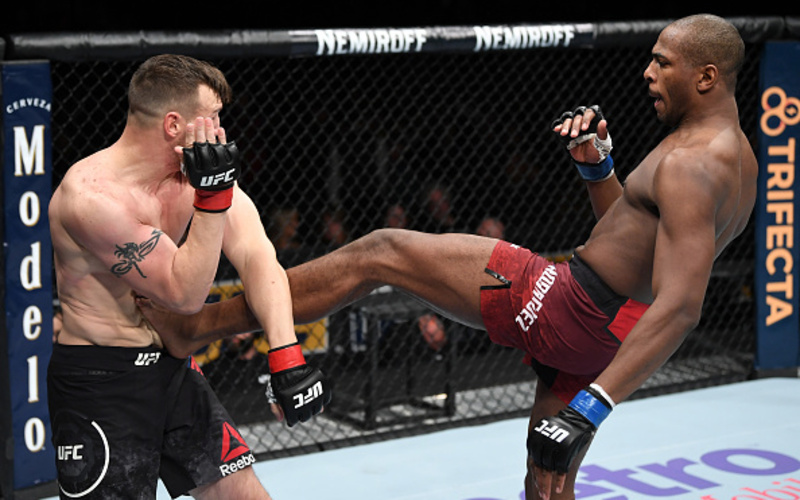 Sometimes, a fight can be won or lost during the training camp. In the case of Mike Rodriguez, he was able to put together a great camp en route to his first UFC victory courtesy of a lifestyle change.

For the first time ever during a camp, Rodriguez said he gave his friend his gaming console in order to prevent himself from playing during his fight preparations.

Rodriguez knocked out Adam Milstead in less than three minutes at UFC on FOX 31 last Saturday. The win gives Rodriguez a 10-3 pro record and improved his UFC record to 1-1. He reached the UFC courtesy of his finish of Jamelle Jones on Dana White’s Tuesday Night Contender Series.

Rodriguez, who had gone two-and-a-half months without gaming, said it just something he felt like he had to do. And since he had great results, he intends to repeat the process each time he has a fight camp from now on.

Rodriguez knocked Milstead down just 25 seconds into the fight. After wearing on him for a bit with top control, Rodriguez put his clinch-work to use with knees to Milstead’s body. That was when Rodriguez realized he had Milstead beat.

“I hit him with a knee and I felt his body collapse a little bit,” he explained. “I was like, ‘Oh, this is his little soft spot here,’ and that’s what made me go to the body.”

Rodriguez then disengaged from the clinch and threw a front kick to Milstead’s body. Just as heavyweight and light heavyweight champion Daniel Cormier was commenting from the analysts’ booth that he liked Rodriguez’s body work, Rodriguez uncorked a huge left hand followed by a left knee to Milstead’s body which crumpled him. After a few ground and pound strikes, the bout was called off and Rodriguez had his first career UFC win.

Rodriguez said he hopes to return to action in February. For now, he intends to get back to gaming while he can with Rainbow Six and Red Dead Redemption II.