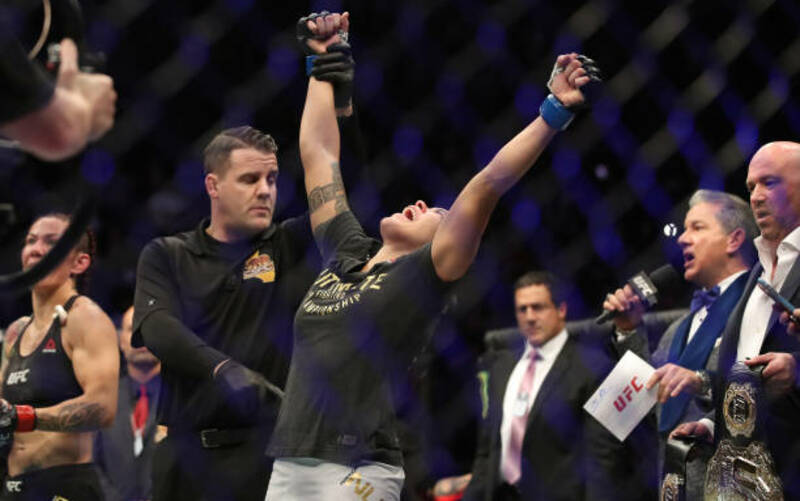 This past Saturday at UFC 232, Amanda Nunes made history by knocking out Cristiane “Cyborg” Justino, ending her historic thirteen-year streak of dominance. With the win, Nunes became only the third fighter to capture simultaneous titles in two different divisions. Conor McGregor and Daniel Cormier were the first athletes to achieve the feat.

Naturally, the discussion quickly turned to whether or not Nunes’ accomplishments in her 21-fight career are enough to call her the Greatest of All Time (GOAT) of the women’s scene. As with most discussions around the greatest of all time, we’ve heard all the arguments. Now that the dust has settled, here is the right take.

There are only a handful of women able to make a serious case for GOAT status, and Justino’s is the weakest of them all. While her supporters may point to her impressive 20-fight unbeaten streak over 13-years, and her finishing percentage, they are not as quick to admit that her dominance was over the weakest of the five major women’s divisions.

“Cyborg” has proven to be one of the top fighters in WMMA, but she has done so with a massive size and strength advantage. So much so that most of the big names on her resume had to move up a division or two in order for her to stay active. They are also quick to overlook the fact that she has been popped for PEDs in the past, a fact that hurts her argument.

The stats surrounding “Cyborg” are at many times misleading. Yes, she has captured and defended the Strikeforce, Invicta FC and UFC featherweight belts, but has not consistently faced ranked opposition at 145 under the UFC banner.

Going into the bout with Nunes, the Brazilian striker had not faced a ranked 145-pound competitor for more than two years. While I recognize that it is due to both Bellator housing several of the top ranked featherweights, in addition to the UFC not committing to the weight-class, it can not be denied that her most notable triumphs have come over women who have had limited success in lower categories.

This is not to say that Justino’s resume is not impressive. She has been victorious over such names as Gina Carano, former Strikeforce champion Marloes Coenen (twice), former Invicta FC title holders Yana Kunitskaya and Tonya Evinger as well as Holly Holm, with the latter being the most accomplished of them all, having captured the UFC bantamweight crown from Ronda Rousey. “Cyborg” is without a doubt one of the best WMMA fighters to ever do it, but remains at the back end of the discussion for now.

The hardcores will tell you, Fujii was without question the best of her time, and that’s just it. Fujii was a well-rounded force that dominated at a time when the women’s scene was still in the infancy stage of its development. In MMA more than any other sport, we tend to have trouble letting go of the past and acknowledging the greats currently competing in the sport, this is no truer than with us WMMA fans. Like “Cyborg”, Fujii may be best known for her impressive 22-fight run before tasting defeat for the first time. Unlike “Cyborg”, her advantage was not due to size, but rather a skill set levels above her opposition.

“Mega Megu” has solid names on her resume, defeating #2 ranked atomweight Seo Hee Ham and inaugural UFC strawweight queen Carla Esparza early in their careers. Add in Mei Yamaguchi and Lisa Ellis and you have the biggest names on Fujji’s resume, in the win column that is. Fujii is the most unique fighter in the discussion as the argument could be made (and has many times) that she should have retired undefeated, considering all of her losses ended in controversy. Due to many of her victories coming against unproven fighters who never really reached championship status or similar glory to that of some of the more recognizable names in the sport, “Mega Megu” falls just short of GOAT status, but was indeed top of the class of the women’s scene in her prime.

Regardless of what you think of the controversial Rousey, you cannot overstate her dominance in mixed martial arts. Rousey debuted as a featherweight and compiled an impressive 4-0 mark over notables Ediane Gomes, Charmaine Tweet, Sarah D’Alelio and current Bellator featherweight champion, Julia Budd. “Rowdy” dropped down to the bantamweight division and captured the Strikeforce title and picked up one more victory before crossing over to the industry-leading UFC.

Rousey quickly became one of the biggest names in the UFC, as she dominated opponent after opponent, breaking records in the process. She easily has one of the most impressive resumes in the sport, as every name on her record is recognizable to many fans. Her case is stronger than most for many reasons. Out of her 12 victories, only one opponent (Miesha Tate) has made it out of the first round. She was the first woman to hold both the Strikeforce and UFC bantamweight title, and her record of most consecutive title defenses for a woman still stands. While she was knocked out in her last two appearances for the UFC, her accomplishments speak for themselves.

If you don’t believe Jedrzejczyk is the best, just ask her. The Polish striker is confident of her abilities and accomplishments, for good reason. A multi-time world Muay Thai champion, Jedrzejczyk compiled an impressive 6-0 record as a flyweight. She quickly began racking up wins over well-known opponents at the time, as Bellator flyweight Kate Jackson, Julia Berezikova, Karla Benitez and former Cage Warriors titleholder Rosi Sexton all fell victim to the American Top Team standout’s punishing striking early in her career. Being a dominant 125-pound athlete wasn’t enough however.

The UFC installed the women’s strawweight division in 2014, with Claudia Gadelha and Joanna Jedrzejczyk picking up victories in the weight-class before a champion was crowned. Jedrzejczyk picked up two victories at 115-pounds before acquiring the strawweight belt. Joanna would go on to defend her crown five times before relinquishing it to Rose Namajunas, falling short of tying Ronda Rousey’s record for most consecutive title defenses by a women’s champion. Now 1-3 in her last four bouts, including two failed title bids, Jedrzejczyk’s case for GOAT has taken a hit, but she is young enough and accomplished enough to bounce back in the years ahead.

If we are being honest, Amanda Nunes is without a doubt the GOAT of the women’s scene. On the surface, some of the arguments against her seem valid, but when you take a closer look, they don’t really stand up. One such argument is the idea that Jedrzejczyk and Rousey should be considered before Nunes because they have successfully defended their titles more times. When we look at their UFC records, Jedrzejczyk is 9-3-0 in the UFC, Rousey is 6-2-0 and Nunes is 10-1-0. Nunes’ current streak nets her more wins than Rousey’s UFC career alone. Is defending a title more important than quality victories?

Another argument is that Nunes has never enjoyed a streak like that of Fujii’s and Justino’s. This is among the weakest of the arguments as again, quality victories are more important than padded records. Yes, Nunes has experienced defeat, but that is the case for most fighters. Do we hold the losses to Hughes and Serra against GSP? What about Hughes’ and Woodley’s past setbacks? Is Anderson Silva not the greatest middleweight of all time, even after his defeats at the hands of Chris Weidman?

When you look at her resume, it stands above the rest. Nunes is the only woman to simultaneously hold titles in the bantamweight and featherweight divisions for the UFC. “Lioness” has victories over two of the women in this discussion, stopping Ronda Rousey and Cris “Cyborg” in a combined 99 seconds. The wins were statement victories, as both fighters were dispatched by the Brazilian star in their respective primes. Let’s just list off the champions “Lioness” has defeated. current Bellator featherweight champion Julia Budd, Inaugural UFC featherweight champion, Germaine De Randamie, former Strikeforce, Invicta FC and UFC 145-pound champ “Cyborg”, former Strikeforce and UFC bantamweight champions Rousey and Tate as well as current UFC flyweight queen Valentina Shevchenko (twice). Everyone outside of Shevchenko fell in the first round, with Budd, Rousey and “Cyborg” not even making it past the first minute.

I rest my case.