EDIT: On January 14, 2019, UFC Fight Pass (@UFCFightPass) confirmed my report on the leaks insofar as them live-streaming the event, but their tweet indicated that the date would be Friday, February 22, 2019 which was the original date promoted by Eddie Bravo. Thank you for following along with this coverage. I can’t wait for this event!

First posted by Rustam Chsiev on IG:
(https://t.co/KnufjN7efu)
The INCREDIBLE #CJJFN will be LIVE exclusively on #UFCFIGHTPASS

On November 20, 2018, Eddie Bravo began promoting an event titled ‘Combat Jiu-Jitsu Fight Night’ on his Instagram pages. He used the EBI Official Page (@ebiofficial), a new page for the Combat Jiu-Jitsu promotion (@combatjiujitsufn), and his person page (@eddiebravo10p). The original promotional materials only remain on his personal page. I’ll explain why I believe they were taken down on the other pages later.

The original event was planned for February 22, 2019, in Monterrey, Mexico and featured a ‘4-man tournament for the CJJ FN Championship’ involving Fabricio Werdum vs. Gordon Ryan, Vinny Magalhaes, and a TBA fourth participant.

On December 23, Eddie Bravo posted the prices of tickets for the event and began promoting social media posts advertising the event on Facebook. This included three tiers of prices. It was planned as a PPV streamed on inchbyinch.tv.

A couple of participants for the 135lb tournament were announced. Unfortunately, those announcements were taken down and lost. 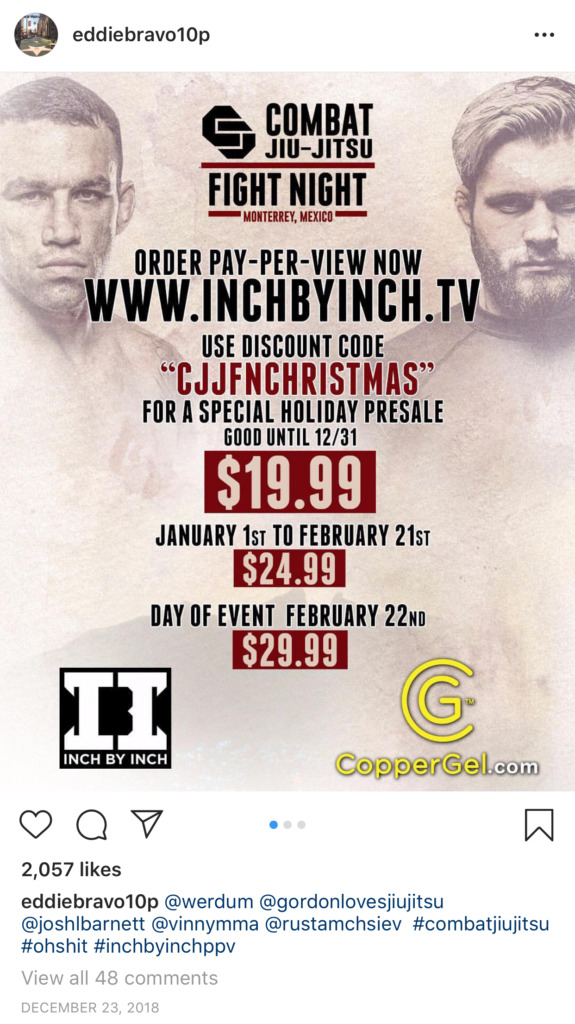 A couple of tangential events are worth noting as the CJJFN/UFC Fight Pass news comes out.

First, Vinny Magalhaes is no longer competing. This question of a missing person is easily speculated: Vinny was beaten by TKO at the PFL 11. Where he fought in the LHW Finals against Sean O’Connell. Magalhaes’ departure from Combat Jiu-Jitsu Fight Night makes sense.

While CJJ Worlds did stream on UFC Fight Pass previously, it was only once on November 12, 2017. The prelims were exclusive to UFC Fight Pass while the main card was on PPV via UFC.TV and inchbyinch.tv. Thus, seeing this logo on fresh promotional material for 2019 raised some eyebrows.

Christmas is not over yet for @UFCFightPass subscribers. We’ve saved a couple of massive tickets items to announce in the next 10days or so. I’m excited to see reaction

It seemed all someone had to do was start putting the pieces of the puzzle together.

My theory, on the night of Sunday, January 6, 2019, the news of the live, exclusive streaming deal leaked to Instagram by the @EBIOfficial IG account.

Allegedly, this post came by accident. Thusly, it was subsequently removed. Time of the posting is unknown, but Rustam Chsiev reposted the Instagram post at 8:27 PM EST.

#Repost @ebiofficial with @get_repost ・・・ @combatjiujitsufn arrives to LA!!! SoCal get ready, Los Angeles will be new host to the biggest event in Jiu-Jitsu History Combat Jiu-Jitsu Fight Night 1!!! With big news that it will be Live on UFC FIGHT PASS!!! With a new date Saturday February 23rd! Featuring the 2x ADCC World Champion and 2x UFC Heavyweight Champion the legend @werdum makes his Combat Jiu-Jitsu debut!!!! He faces the 2017 ADCC World Champion, Three weight EBI Champion, and IBJJF World Champion also making his CJJ debut @gordonlovesjiujitsu – They will be in a Super 4 Man Heavyweight Combat Jiu-Jitsu Tournament also featuring Former UFC Heavyweight Champion and Catch Wrestling specialist @joshlbarnett facing the Russian Wrecking Machine ADCC Medalist, EBI Finalist and MMA Veteran @rustamchsiev – CJJFN 1 is brought to you by @coppergel February 23rd, Live from the place that saw EBI be born The Florentine Gardens in Hollywood, CA tickets info TBA and available on @ufcfightpass the biggest and best plataform worldwide to enjoy live events! To everybody that bought your PPV on the Presale, you will be refunded so go right now to UFCfightpass and sign up to enjoy the Experience of CJJFN 1! – CJJFN will still be going to Mexico in 2019 in collaboration with MMA Promotion @combateextremo hosting 3 shows in 3 different cities such as Monterrey, Guadalajara, and Mexico City alongside Local promoter Hector Molina bringing the best action to Mexico more info TBA – @eddiebravo10p @victordavilaufc @ufcfightpass @mastervicproductions #CJJFN #CJJ #CombatJiuJitsu #FinishOnly #EBI #LosAngeles #California #CJJFN1 #CopperGel #InchbyInch

Further confirming the news, Blanca Garcia (@blanca_marisa_garcia) independently posted the news with an identical caption at 9:21 PM EST. Garcia is the official photographer for EBI.

All older promotional posts for Combat Jiu-Jitsu Fight Night are no longer in existence. Even the previously used IG account @combatjiujitsufn is barren. 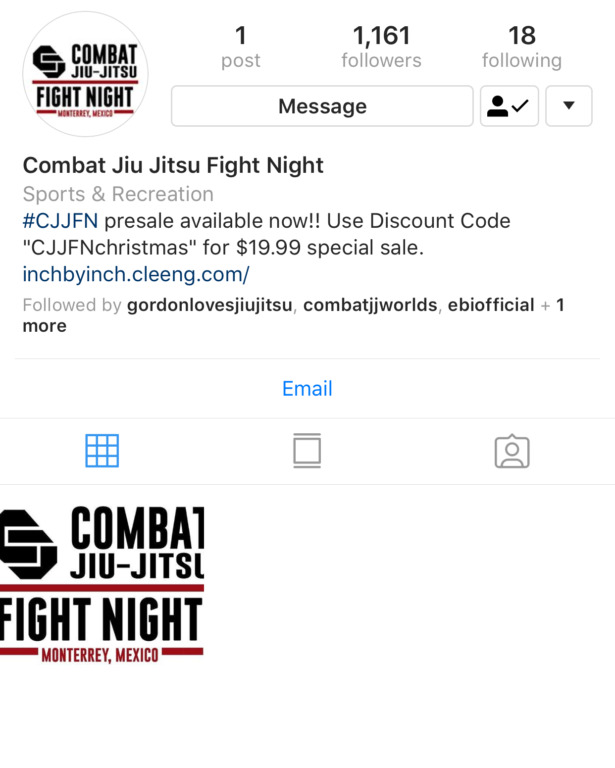 My theory: a broadcast deal with UFC Fight Pass restructured the streaming details and thusly previous promotional posts were of no use in the lead up to an announcement. Unfortunately, the news leaked early.

Stay tuned for more news for this event! As always follow me @volkstyles, to stay up to date with UFC Fight Pass news!