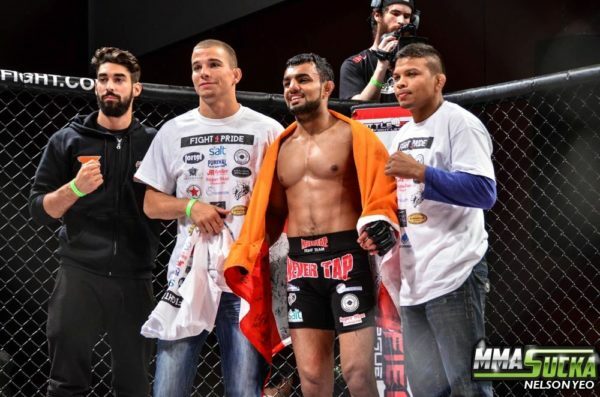 At the regional levels of MMA dreams are all that many have. Dreams motivate on the greyest of days and grimest of situations. For Gurdarshan Mangat, it has been a long time coming to achieve his. Mangat and his dreams are finally coming true at ONE: REIGN OF VALOR, on March 9, 2019, he makes his promotional debut. The Canadian fighter faces the battle-tested Finn, Toni Tauru.

Debut with ONE Championship

Mangat is as prepared as he can be for his ONE Championship debut. The 32-year-old left British Columbia and his training partners at Revolution Fight Team in order to focus on himself in Las Vegas, Nevada with Xtreme Couture.

“I know that Jeremy [Kennedy] had been doing it and it’s a completely different level down there,” Mangat explained the first step to moving to Vegas. “It wasn’t about the level, obviously I’ve got a crazy good team back home. I’ve just got a lot of things going on outside of the gym that I handle.

“I was going to come out to Vegas and train for a week, but Russell Peters found out I was going to be out here,” his friendship with comedian Russell Peters helped immensely. “He was like, ‘Hey bro, I have a house out here, I’m never there, I live in L.A. so why don’t you just take over the house. You will have the house to yourself and you’re able to focus. That’s where I’m at. I’m at Russell’s house, I’ve been here for seven weeks now.”

The move was not all about training, but about keeping his head in the right space as well. Which is a very important aspect of competition, mental clarity. Mangat used this change of scenery to break up the routine of his life in British Columbia.

Life Outside the Cage

“Saint Lion” has a life outside of martial arts that not many know about.

“I don’t talk about it publicly too much. My wife and I take care of high-risk youth. She quit her job and that’s what I do full time when I’m not fighting. These kids are dealing with stuff themselves. So that takes a lot of time and I could never think about training outside of training.”

Training became very hard for Mangat. All of his energy was focused on life outside the gym. As a professional fighter, the mental game is just as detrimental as the physical game.

“After training I would have to deal with kids getting jumped, kids getting into fights and kids doing drugs. These kids are all from troubled pasts, so I kind of lost passion for training and it got tough balancing the two things.”

Once he was able to focus on himself in Las Vegas, and eventually Thailand prior to hopping on a plane to Yangon, Mangat feels he is as prepared as he can be for the most important fight of his MMA career.