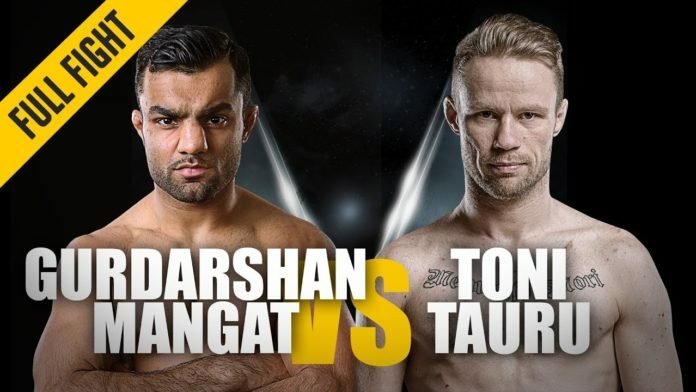 Gurdarshan Mangat stormed onto the ONE Championship scene on Friday, March 8. It was the biggest fight of his career, but it almost didn’t happen.

The 32-year-old British Columbia born flyweight took on former contender Toni Tauru. He utilized relentless pressure, including some nasty leg kicks to set up the beginning of the end.

However, leading up to the contest, was a struggle that almost lead him to not competing at all.

On his “Saint Lion’s” official Instagram page, he explained that his body began to break down 24-hours prior to the fight. He had contracted some sort of stomach virus, which did not allow him to keep any food in his body.

The fight that almost never happened…What the world saw is 3 round fight..here is what happened before the fight :24 hrs before the fight, after weigh ins my body started completely breaking down. I had contracted a stomach virus which was not letting me process any food and vomiting everything I tried eating or drinking. I was feeling my entire opportunity, preparation, sacrifces, investment in myself slipping away being under 24 hrs from the biggest moment of my career and for my people. Never felt so hopeless, i was taken to the hospital at midnight due to continued vomiting and dehydration. My weight was dropping rapidly and everything was slipping away. Doctors realized right away it was a stomach virus attacking .Totally distraught, called my wife and told her I dont know what to do, how can this happen? What will people think if i pull out? Ive disapointed everyone etc and she became my voice of reason that I owed nobody nothing , i owed it to my health. Its ok If i cancel the fight . My stubbornness couldnt let it go that easy, I put to much into this. My bro Jeremy sat bedside trying to keep my spirits up and be voice of reason. Kept me in the hospital till 4am before releasing me with alot of hydration packs and strict instructions on no solid foods , walked out like a bad hangover. I had a decision to make, did i travel to the other side of the world to go home empty handed now or was this just one final test to pull strength from. These are those moments when your physical is failing, you gotta tap into your spiritual and mental. My preparation i had to believe was so good that even on my worst day I could beat my opponent on his best day. At 1pm Fight Day,I decided I was going to risk it, go into the fight empty stomach with just some electrolytes / water/ banana and stand by whatever consequences of the decision I chose to take on. Once my entrance song dropped, I saw strength in my preparation and rest was history . Its why the victory was so emotional when it was all over cause my back was already up against the wall before the fight but once again we rose to the discomfort. Another chapter, another story ?? ? @duxcarvajal