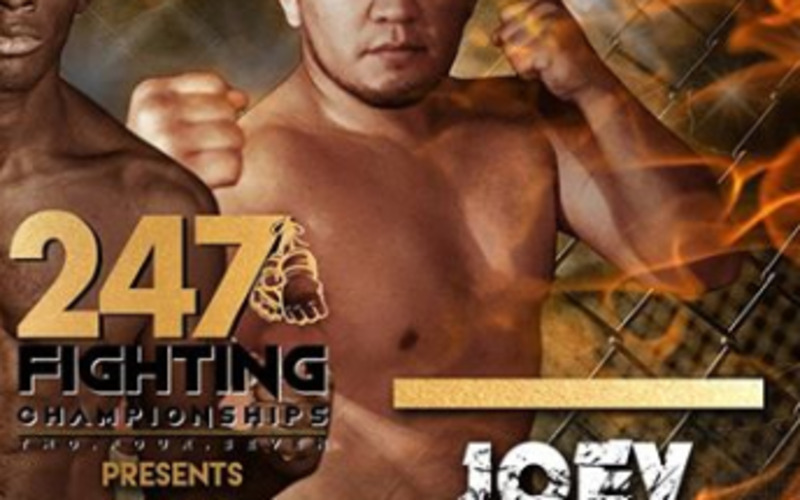 Joey Munoz will be fighting at 247 Fighting Championships‘s debut event, Steeltown Throwdown, coming up in April. Munoz is a busy guy between training for his professional MMA career as well as working full time at his family’s construction business in Nebraska. Munoz gave MMASucka some of his time to discuss a whole host of topics. They include his hectic training, his time at WBKFF, and his opponent, Khama Worthy.

Ryan Middleton of 247 FC reached out to Joey Munoz in January about fighting at the promotion’s inaugural event. Since the promotion had never held any events before, Munoz had to do his research. But, he realized right away that this would be an incredible opportunity.

“I saw he was with some different promotions around there. I figured it was a good opportunity to get away from this side of the states and head over that way to get some new eyes on me,” Munoz had to say of Middleton and the chance to fight for this promotion.

He would go on to say that this will by far be the farthest he has ever traveled for a fight. But, the idea of capturing the attention of a completely new set of fans was very appealing for Joey Munoz. “Win or lose, I’m coming out there to put a hell of a fight on and I guarantee I’ll get some extra eyes on me,” he said.

Recently, Joey Munoz has had to deal with some complications with regards to his training. He was supposed to be traveling to Denver to train, but his training partner’s wife just gave birth to a child, so plans had to change. That, mixed with the Nebraska weather (which is supposed to dump 16 more inches of snow this week), has made things complicated. Along with that, many of Munoz’s training partners are preparing for fights of their own in the coming months.

“We’re gonna have our hands full this month. We have another training partner who’s fighting this weekend in Omaha. We have two other guys fighting in two different places next weekend,” Munoz said of his training situation.

Still, Munoz has gotten all of his work in. He does his training at several different places. Munoz trains his wrestling at Brock Smith‘s gym, who was his high school wrestling teammate and recently fought for LFA. He also does a lot of his training in his own gym in his garage, which one of his coaches named “Average Joe’s Gym.”

Joey Munoz’s last fight was a bareknuckle boxing match, which he took on extremely short notice in November. Munoz came out of the event with an upset win, and a great experience. He was very happy to have such a great opportunity.

“They called me last minute for it. They called me Wednesday, a day and a half before the fight. They’re like ‘Hey, we got a big opportunity.’ They threw the big names out there. They said my opponent would be an old Ultimate Fighter contender. People like Chris Leben, Johnny Hendricks, and Bas Rutten would be there. So I was like I don’t care what kind of sport it is, I’m gonna go see these guys and show them what I have,” Munoz said of the opportunity.

Despite controversy regarding the payment of fighters after the event, Munoz was still appreciative of the opportunity and the experience. “I got my pay-per-view ratings, I got to meet some big names in the sport, and I got to get a good win under my belt,” he said. He also realized that his win at WBKFF likely allowed him this opportunity to fight in Pittsburgh. “I think that’s the only reason Ryan (Middleton) got ahold of me, because my name got thrown around after that.”

Munoz also recognized that his fight in WBKFF helped prepare him for his fight against Worthy. “I figure if I can take a shot from a big guy like (his bareknuckle opponent, Marcelo Alfaya), I think I’ll be able to take a couple from Mr. Worthy. I don’t plan on taking too many because anything can knock you out, but I’m going in confident in my defensive capabilities,” he said.

Khama Worthy is the top ranked lightweight in Pennsylvania. Joey Munoz is very aware of that, and it’s what makes the fight even more intriguing. Some fighters might be intimidated by taking on the top guy in a state in his home city, but not Munoz. “I love (being the villain). I’ve always fought in Colorado and over there so I’ve always been the out of town guy. It’s something I grew to love. Letting everyone hate me and then they love me afterwards.”

Munoz watched film on Worthy, as he does for all of his opponents. He came away impressed, but not intimidated by what he saw. “I’ve definitely watched film. I watch film on all my opponents. I get a good study session in. He’s sharp. He’s sharp with his hands. Really fast, real strong. He has knockout power in both hands and he can deliver that power very quickly. But it’s nothing I haven’t faced before, it’s nothing I haven’t seen. I’ve fought some of the best guys out of Colorado, Wyoming, and Nebraska. I’m ready to move onto the next state”

There are rumors that Worthy is being watched by the likes of Bellator MMA and ONE Championship. Munoz sees that as an amazing opportunity for himself in the upcoming fight. “From what I see, he’s really well known over there. I get a win off of him, I take those eyes off of him and put them on me,” Munoz said.

Joey Munoz isn’t in the fight game for anyone but himself. He’s not worried about what people think of him. His only concern is getting in the cage, taking care of his business, and proving to himself that he can hang with the best. “If it was up to me, we would fight in a closed room with no audience and they can watch on TV. A lot of fighters like to fight for the fans and that’s all good. But, I’m not here to please fans. I’m here to please myself and get what I came to do.”

Munoz also shared his simple, yet effective fight strategy. As opposed to having a specific gameplan, he likes to just feel his opponents out, see what they are doing, and react. He made his plan crystal clear when he said “I try not to go in there with a game plan except ‘Don’t get your ass kicked and do the ass kicking.’”