Darren Till vs. Jorge Masvidal Preview at UFC Fight Night 147 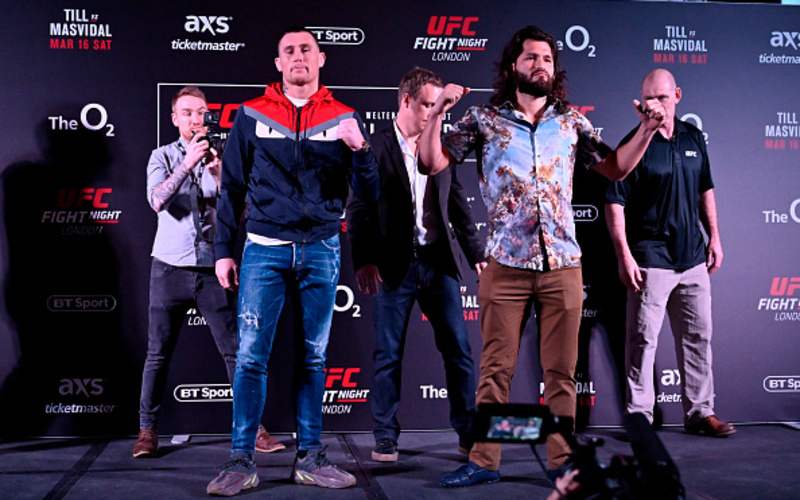 UFC Fight Night 147 will feature a pivotal welterweight match-up in Darren Till vs. Jorge Masvidal, set for the main event of the promotion’s London offering.

According to online MMA betting sites, Till has opened up as a moderate favorite over Masvidal. “The Gorilla” is pegged at -260, while “Gamebred” Masvidal can be had at +210 as an underdog.

Till (17-1-1) suffered his first professional defeat in his title challenge against former welterweight champion Tyron Woodley. He succumbed to a second round D’Arce choke. Prior to that, Till had been 5-0-1 in the UFC with wins over the likes of Stephen Thompson and Donald Cerrone.

Masvidal (32-13) returns to the Octagon for the first time since November 2017. He enters the contest with Till on a two-fight losing streak; he dropped decisions to Thompson and Demian Maia. Before his skid, Masvidal had been on a three-fight winning streak, earning wins over Cerrone, Jake Ellenberger and Ross Pearson.

What’s at Stake for Till?

For Till, this is likely a must-win if he wants to remain in the immediate welterweight title picture. Till, ranked as the No. 3 welterweight, will look to hold his spot against No. 11 Masvidal. Should Till lose, it would be two in a row having just come off a title loss. He would need two-three good wins for another crack at the title. Should that be the case, the massive Till might consider finally moving up to middleweight, which is something many fans thought would be the case following his loss to Woodley.

If Till wins, it could set up a potential title eliminator with another top welterweight. That welterweight should be Ben Askren. Askren and Till have gone back and forth on social media since Askren was traded to the UFC. After Askren jumped to No. 6 in the world following his win over Robbie Lawler, a fight between the two for a title shot would make all the sense in the world.

Colby Covington is slated to receive the next shot at newly-minted champion Kamaru Usman, Thompson is scheduled to fight Anthony Pettis, and Rafael dos Anjos is on a two-fight skid. A victory over Masvidal would likely set up a huge fight with Askren for Till, which would be a highly-anticipated match-up. Till’s future in the 170-division probably hinges on the outcome of this fight.

What’s at Stake for Masvidal?

Immediate relevancy in the crowded welterweight division. Masvidal has been out of fight fans’ eyes for nearly a year-and-a-half, and hasn’t won in over two years–his last win was over Cerrone way back in January 2017. Masvidal is also mired in only the second two-fight slump of his 45-fight career, and has never lost three in a row.

A loss would lead to a long climb back up the welterweight rankings for Masvidal, who moved up from lightweight following the IV re-hydration ban. A 165-lb. division would be perfect for a tweener like Masvidal, but that doesn’t appear to be on the horizon yet. And with the depletion that would come from Masvidal attempting to cut back to 155, it all makes for winning this fight being very important for him.

Should Masvidal win, it would catapult him into the top-5. There, he could earn a big fight: Lawler, Santiago Ponzinibbio or maybe even Woodley spring to mind. Of course, he could steal the Askren match-up from right under Till’s nose. A win over Till could conceivably get Masvidal one or two big wins away from a title shot.

Both men are primarily strikers, so this main event should play out on the feet. Masvidal both lands and absorbs more than Till (4.1 significant strikes landed per minute to 2.39; 4.24 absorbed per minute to 2.98).

Masvidal is tagged as a kickboxer, but his calling card is his crisp boxing combinations. 13 of his 32 professional wins have come via T/KO. Masvidal can wrestle and grapple as well, averaging just over one takedown per fight. He clearly prefers to strike, but has turned to his grappling when dropped in the past.

Till, on the other hand, is a Muay Thai fighter. The majority of his 17 professional wins have come via T/KO, 10 in total.

The hometown favorite packs more power in his strikes than Masvidal, but Masvidal appears to have the sharper boxing and sets a higher pace, throwing fluid combinations when he’s at his best. It will be up to Till to land enough power shots to back Masvidal up and negate his volume. From there, Masvidal may attempt to take the fight to the ground, something Till will need to be ready for. Masvidal has superior grappling to Till’s, an area he’s underrated in due to his preference to strike.

Whatever happens, it should be an interesting match-up if both men are at their best. The consequences the bout will have on the welterweight division could prove even more interesting.