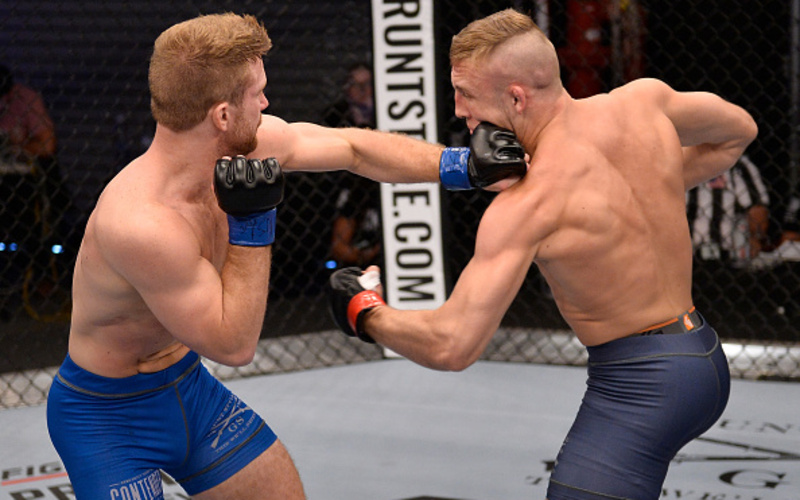 Alex Gilpin (12 -1 MMA) is set to take on Lance Palmer (17 – 3 MMA) in the main event of PFL 2019 #2: Regular Season. The event takes place May 23rd in the Nassau Veterans Memorial Coliseum in Long Island, New York. This featherweight clash has Fight of the Night written all over it, as pure skills collide with these two elite mixed martial artists.

Different than most fighters, Gilpin maintains high-level training just days before his scheduled match. Speaking exclusively with MMASucka, Gilpin explains how he takes an unorthodox approach to camps. “I’m feeling great, man. [Training camp] is not quite done yet. I typically go pretty hard until 3-4 days before the fight, then obviously I taper off. I mean, it’s tapered a little bit, I’m not sparring as hard, but I go hard pretty much close to the fight, yeah. Probably closer than I should.”

Making weight has never been an issue for Gilpin. He has always maintained a professional approach to weight cutting, and has a deep understand of how his body works. With just a week away, his weight cutting is approaching the goals he needs at this point. “My weight is good. I was a little heavier after an injury in my last fight at the [Dana White’s Contender Series], but man, the weight is just falling off. I’ve been eating good, been eating plenty. All the training sessions have melted it off me. I’m feeling great.”

Gilpin has been on a tear. Going on a 7 fight win streak, with 6 finishes, is an incredible feat. He has amassed a 12 – 1 professional record, with his only loss coming via split decision to Dan Moret (13-5 MMA) in 2016. His last appearance was at Dana White’s Contender Series, where he successfully landed a D’arce Choke finish over highly touted JR Coughran (6-2 MMA). As he is now approaching his first fight in 2019, he believes in more in his improvement, and not the hype that has come with his recent string of success. “You know, I just feel my skillet improves every single time I step into that cage. If you look at my fights now, versus what I looked like 2-3 years ago, I drastically improved. And I drastically improved since my last fight as well. My last fight obviously wasn’t a great performance but I got it done. I’m just looking to get better each time. Yeah, I got momentum, but so does Lance. and I understand that.”

In what can be argued as one of the better featherweight matches this year, Gilpin is ready to take on experienced veteran Lance Palmer in the main event. Stylistically, both these fighters compliment each other very well. Palmer is riding a 6-fight win streak of his own. All 6 have been under the PFL banner, and he is currently undefeated with the promotion.

“Lance is a tough opponent.” Gilpin began explaining. “I looked up to him since I got into this sport – I know what he brings to the table. I like how I fair against him and I love this match-up. It’s think it’s great for me. And I think a lot of people are going to write me off, and that’s great. I’m looking forward to getting my hand raised and finishing him.”

With mutual respect, Gilpin is never one to make predictions for his fights. However, this time, he truly believes in his growth and evolution as a mixed martial artist. “I’m not the biggest with predictions, but I’ll give you one here though. Either a knockout or a submission. So that’s any sort of finish, right? That’s the way I see it going. Within the first three rounds.”

To watch the entire video, check out the MMASucka sponsored video podcast The Complete Knockout for the full interview with Alex Gilpin.