British Columbia, Canada had a fair share of UFC fighters throughout the years from the likes of Rory MacDonald, Kajan Johnson, Jeremy Kennedy, Sarah Kaufman and most recently Cole Smith. Many of these stars of the region came up through regional shows like BFL, Unified MMA and TKO. British Columbia fighters Jamie Siraj and Tristan Connelly attempt to make their transition to the next level, while Keanan Kellar makes his professional MMA debut at Rise FC 4.

Jamie ‘The Gremlin’ Siraj fights out of Tristar Vancouver and is the current Unified MMA Bantamweight Champion with a record of 7-2. ‘The Gremlin’ is a very exciting young fighter to watch as he does not like to leave fights in the judges hands. Siraj has 2 TKO victories and 4 submission victories in his pro career. Currently Siraj has a fight booked against Blake Sigvaldson on July 27th at Rise FC 4. With a win expect it will either mean a Rise FC title shot or a call from the UFC asking him to come prove his worth.

When you see Connelly’s name on a fight card you know that you are about to see a war as all 12 of his wins have been finishes with 9 coming via submission. The current Cage Sport lightweight champion will be stepping into the Rise FC cage on July 27th to take on D’Juan Owens (18-13-1) for the RFC Lightweight title. Connelly is 9-2 in his last 11 fights and if he can secure another finish, what is next should be interesting for the Canadian.

The #2 ranked amateur middleweight in Canada decided to step up into the professional ranks. Keanan Kellar made his amateur debut back in 2015. Now 4 years later, he is set to make his professional debut on July 27th at Rise FC 4. The 10th Planet Jiu Jitsu purple belt who fights out of Titan MMA is set to fight James Foster (2-1). Look to see Kellar who is 6’5″ to use his height to his advantage and keep Foster at distance before attacking.

Rise FC 4 goes down in Victoria, BC on July 27th. Also on the card, Josh Kwiatkowski, Jayden Martin, and Mike Hill. the event is broadcast live on Fite TV. 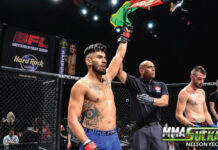