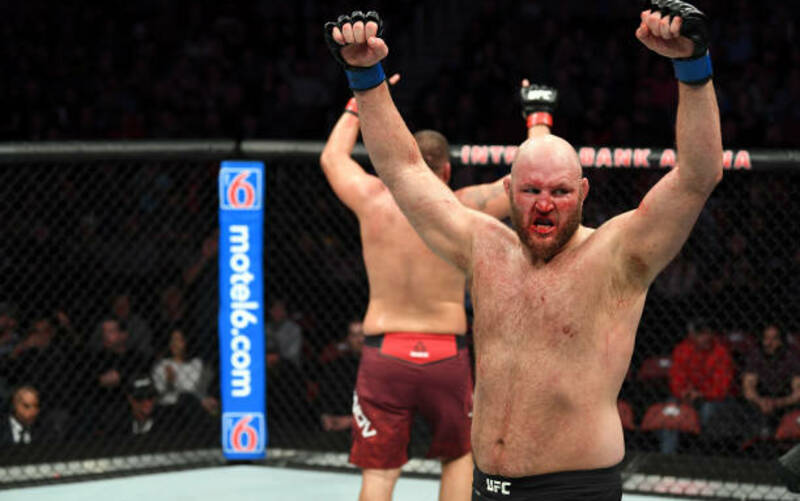 Heavyweight is an interesting division. Fighters tend to have one or two glaring holes in their game, then they add strengths around them. Or, they never change and stick to what makes them great.

On July 20th, 2019, aged heavyweights Andrei Arlovski and Ben Rothwell look to clash for a second time. Their last fight was in 2008, when Arlovski was heralded as a heavyweight striking god and Rothwell was the plodding giant.

I’m going to discuss how glacial improvements will determine why Rothwell will likely win the rematch against Arlovski.

In 2008, Rothwell was riding a 13-fight win streak and Arlovski had just left the UFC for a better payday. Arlovski at the time was the better athlete and it carried his limited game.

In the wise words of my editor Ed Gallo in regards to Arlovski, “He punch with one hand.” The name of the game for Arlovski was always spamming his right hand in various angles. It was simple, but for the heavyweight division, it was enough to be the best.

It was clear that Rothwell had a disadvantage in the athleticism department as he was a constant mark for the right hand. Rothwell also stood out in range, tentative, waiting on Arlovski to make mistakes allowed Arlovski to charge at him, throwing right hands.

Rothwell would be exhausted after being hurt multiple times, Arlovski finished him in the third. Their first fight showed that Rothwell had a glaring speed issue, at the very least, and needed to patch it up.

Heavyweights tend to hit their peaks far later than other divisions. This means for Rothwell, who started out in MMA in 2001, he had 18 years of time to improve. However, at heavyweight, those improvements usually happen at a glacial pace.

After the Arlovski knockout, Rothwell would go on a win-loss streak, losing to Cain Velasquez, Mark Hunt, and Gabriel Gonzaga. However, he was changing. Against Brandon Vera, Rothwell was far more aggressive and pursued Vera from the opening bell.

Now is a good time to explicate Rothwell’s style. The best comparison you could make is George Foreman for MMA. Rothwell is a tall man and tends to stand upright, however, his hands are constantly protruding outwards.

egardless of the stance, Rothwell keeps his hands extended. This gives Rothwell the ability to paw at his opponent’s hands but to also parry straight punches flying at him.

By keeping his arms extended outwards, Rothwell is able to deflect and parry strikes. This allows the slower and bigger fighter to stay in his opponent’s face, flustering them. People have aptly named this the leverage guard. By leveraging his opponent’s punch onto his extended arm, Rothwell can use his long reach and stature to deflect rather than block.

The glacial improvements I mentioned earlier, were always there. However, when Rothwell switched to a more aggressive forward mindset, he added some weapons. In order to keep his opponents in his face, Rothwell added the kicks.

The kicks served the purpose of also adding variation. This was able to frustrate but also take his opponent’s mind away from Rothwell’s punching. This also came off the lean, giving Rothwell the momentum to throw these kicks with some power, as he does not rotate his hips into the kick.

Recent Arlovski has looked far more passive and less likely to charge forward with punches. This has been lauded as a thoughtful improvement, however, it is likely because Arlovski no longer has the cardio to constantly charge forward or the chin to risk it.

Furthermore, his charges have become far slower. Look for Arlovski to back up and then charge forward with his winging right.

However, against Rothwell, these charges might end up like his loss to Ngannou. Constant and obvious charges will be a mark for Rothwell to land uppercuts and push Arlovski off.

Denying clinches for Arlovksi to rest will be paramount for Rothwell as he can do meaningful damage if he stays in his face.

In the decade since Rothwell lost to Arlovski, he has found a mindset that supports this style. While he had the beginnings of the leverage guard, it wasn’t until adding aggression and defense that he could start to look this good.

Arlovski, on the other hand, suffers deeply from change. Arlovski has remained the same fighter as he did against Rothwell in their first fight. This leads me to believe that Rothwell this time will likely be able to light up Arlovski in exchanges.

However, Arlovski has proven that he can stall and deny his opponents the opportunity to deal heavy damage. Regardless, it will be a treat to see Rothwell return to winning ways and get revenge for his loss a decade ago. While his glacial improvements took the better part of two decades, Rothwell has turned into an interesting striker and I look forward to the late stage of his career.

I like the odd ones of MMA, from T-Ferg to Kikuno, if there's something weird and strange in MMA, that's my game.