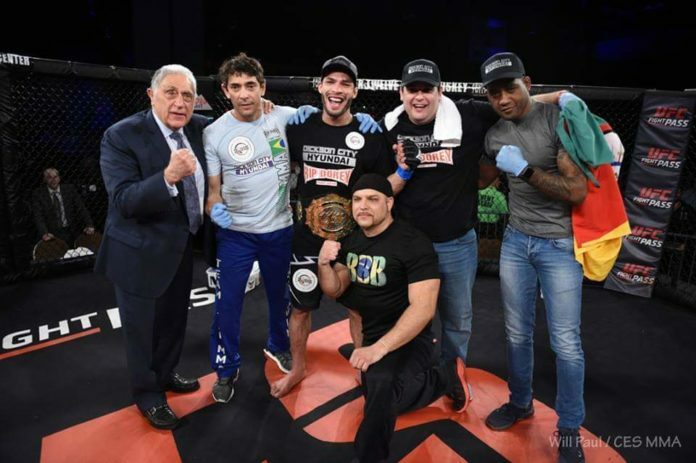 The welterweight champion, de Jesus makes the first defense of his title since earning it at CES 55. This defense takes place in the backyard of the champion as the promotion returns to Hartford, Connecticut for CES 58.

CES welterweight champion, Vinicius de Jesus is red hot as of late. He owns a three fight winning streak which includes two victories inside the Bellator cage. Expanding a bit past this streak is an impressive strength of opposition rating. In de Jesus last five bouts, his opponents held a combined record of 29-3-1. In that stretch, de Jesus went 4-1.

The same can be said of the challenger. While being seven years the elder of de Jesus, Chris Lozano fought some high level talent throughout his career.

Lozano is a true veteran of mixed martial arts. His fighting career dates back to 2009. He quickly ascended to the Bellator stage after compiling a 5-0 record. In Bellator, Lozano went 2-3 over the span of two years. During that time he faced Yoshiyuki Yoshida, Lyman Good, Douglas Lima, Brent Weedman, and Karl Armoussou. Most recently, Lozano fell to UFC veteran, Eddie Gordon at CFFC 60.

CES 58 takes place on September 7th in Hartford, Connecticut at the Connecticut Convention Center. The main card of the event broadcasts live on UFC Fight Pass. At the moment, Vinicius de Jesus vs. Chris Lozano is the only bout set for CES 58.

Amanda Ribas vs. Angela Hill Targeted for May 8th