Katlyn Chookagian – The Next Flyweight Star 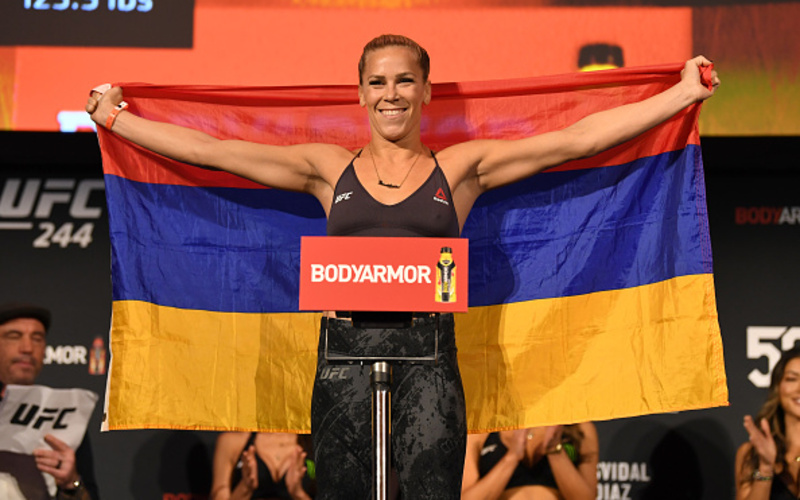 ‘Blonde Fighter’, Katlyn Chookagian is without doubt, one of the biggest threat to flyweight champion Valentina Shevchenko. With only two losses on her professional record, both by split decision, Chookagian is now the clear front runner for a title shot. We look at why she deserves a title shot, how she matches up with the champion and why you should be getting behind her.

Path to the UFC

Once she turned professional, Chookagian went on a tear, rushing to 4-0 within a year. She picked up experience fighting in Hungary twice, including a win against two-fight UFC veteran Melinda Fabian. CFFC clearly picked up on Chookagian’s potential, signing her and matching her with Sijara Eubanks, which she won by unanimous decision.

Realising a CFFC title shot, Chookagian headlined against the undefeated Isabelly Varela. Winning over 25 minutes, Chookagian tasted gold for the first time. With her victory, she became the first ever CFFC women’s champion. Chookagian then captured the bantamweight title, knocking her opponent out in just 45 seconds. The UFC clearly realised her potential, but when she signed, the flyweight division was non-existent.

The two-weight champion made her debut against wily veteran Lauren Murphy. Picking up a unanimous decision victory, she progressed to 8-0.

Then came her chance to gain the biggest win of her career. She was the first ever UFC fighter to walk out in New York, at Madison Square Garden for UFC 205. In New York, ‘Blonde Fighter’ picked up her first loss, losing via split decision to two-time title challenger Liz Carmouche.

Once the UFC realised that the flyweight division was needed, Chookagian could finally fight at her natural weight. Starting her flyweight career at an impressive 2-0, she dropped another split decision against title challenger, Jessica Eye. Following this fight, Eye gained a title shot. The assumption that Chookagian would have gained a title shot had she won is extremely valid.

Making another run at the title, Chookagian is currently on a two-fight winning streak. These two wins have come over two of the best 125ers the division has to offer. Defeating Joanne Calderwood by unanimous decision at UFC 238, Chookagian called for a title shot. Instead of a shot at Shevchenko, Chookagian performed this past weekend at UFC 244. Defeating former Invicta FC champion Jennifer Maia, it is time we saw Chookagian in a title fight.

Ranked #1 in the division, it is about time we saw Katlyn Chookagain vs Valentina Shevchenko for the flyweight strap. No one can deny that the Renzo Gracie brown belt deserves a shot. 6-2 in the UFC, with her only losses by split decision, few have managed to work out the puzzle she presents. With strong Jiu-Jitsu and some of the most impressive array of attacks in the division, she could certainly trouble Shevchenko.

The stand-up specialist should be able to present Shevchenko with problems both on the feet and on the ground. Chookagian has similar, kick heavy, distance striking style as Joanna Jedrzejczyk, who faced Shevchenko at UFC 231. Standing two inches taller than Jedrzejczyk and being a natural flyweight, she could cause Shevchenko problems with her length and her more natural size.

Why should we be getting behind Katlyn Chookagian? First of all, she’s one of the ‘good’ ones. Respects all her opponents but doesn’t hold back when giving an honest assessment. Secondly, if you follow her on Instagram, you’ll know just how hard of a worker she is. Massively skilled in both Jiu-Jitsu and on the feet, she’s exciting to watch in the octagon. She comes from a great team, training with Mark Henry, so you can guarantee she’s always prepared. Finally, she knows her worth. Calling for a title shot when it’s deserved and having worked her way to the top, she knows what she wants. Although often buried on the prelims, Chookagian is rarely in a boring fight.

At 4-0, the champion, Shevchenko will likely welcome the challenge. The only other potential contender is Calderwood, who won her previous fight. To overlook Chookagian in favour of Calderwood would be ludicrous and is unlikely to happen, however.