This Sunday, Iowa and Iowa State will continue their storied rivalry (officially known as the “Iowa Corn Cy-Hawk Series” for marketing purposes) with a dual meet at ISU. While the Hawkeyes are heavy favorites to continue their winning streak from a team standpoint, there are some very compelling matchups, including Kaleb Young vs. David Carr, Cash Wilcke vs. Sammy Colbray, and Austin DeSanto vs. Ian Parker. Perhaps the most interested match scheduled for the meet is the 149 lb bout between Iowa State’s #4 Jarrett Degen vs. Pat Lugo, ranked #7 for Iowa (rankings according to Flowrestling). These two had two very competitive matches last year, once in the November dual and once in the 7th-place match at NCAAs. Degen won both: the first in tiebreaks 7-4 and the second 11-9 in regulation. Now both will be looking to climb the podium in a relatively weak 149 field.

Redshirt senior Patricio Lugo, a Florida native, began his career at Edinboro before transferring to Iowa. He had some success for the Fighting Scots, reaching the round of 12 at NCAAs and claiming a win over Iowa’s own starter at 149, the first-rate Brandon Sorensen. However, he was reportedly unsatisfied that he had not broken through as an All-American in his first two years, and the program fell apart in the year after he left. After redshirting in 2017-18, he entered the lineup for his new team and had a solid junior season, earning the 10 seed at the national tournament and then reaching the podium for the first time with an 8th place finish.

Lugo is a fairly straightfoward leg attacker, primarily using a right-handed high crotch to his opponent’s right leg and a right-handed single to their left leg. Stylistically, he’s a classic boxer-puncher, preferring to handfight but not committed to pushing forward. He largely works out of collar ties, but over the course of his career has increasingly turned to a left hand underhook as one of his main tie-ups. Defensively, Lugo keeps good position and is quick to circle behind after stopping his opponent’s shot. He is not known to create extended scrambles off of his opponents’ shots, but his first layers of defense keep most opponents off the scoreboard. He isn’t a manic pace pusher on the level of Austin DeSanto or Justin Gaethje, but he certainly wears on his opponents and keeps a decent attack rate. On the mat, he is a competent rider, but not an elite one, and rarely turns good wrestlers. He is also solid from the bottom position, with a fairly conventional hand-control standup game, but he has had his struggles with elite top wrestlers.

Degen is a redshirt junior who hails from Montana. After taking a redshirt year at Virginia Tech, he followed head coach Kevin Dresser (and assistant Derek St. John) in switching to Iowa State. He made serious improvement over the course of his freshman season, reaching the round of 12 as an unseeded wrestler. He picked up where he left off the next year, earning the eight seed and finishing 7th.

The first thing about Degen is that he is very tall. For a 149 lb wrestler, he’s a skyscraper. The Cyclones took a photo last year of their two All-American finishers, Degen (right) and Willie Miklus.

Aside from his dour expression, you should notice that Degen is a few inches taller than the guy on the left. The kicker is that Miklus wrestled at 197 lbs, nearly 50 more than Degen, and yet Jarett the Giraffe is a good bit taller. 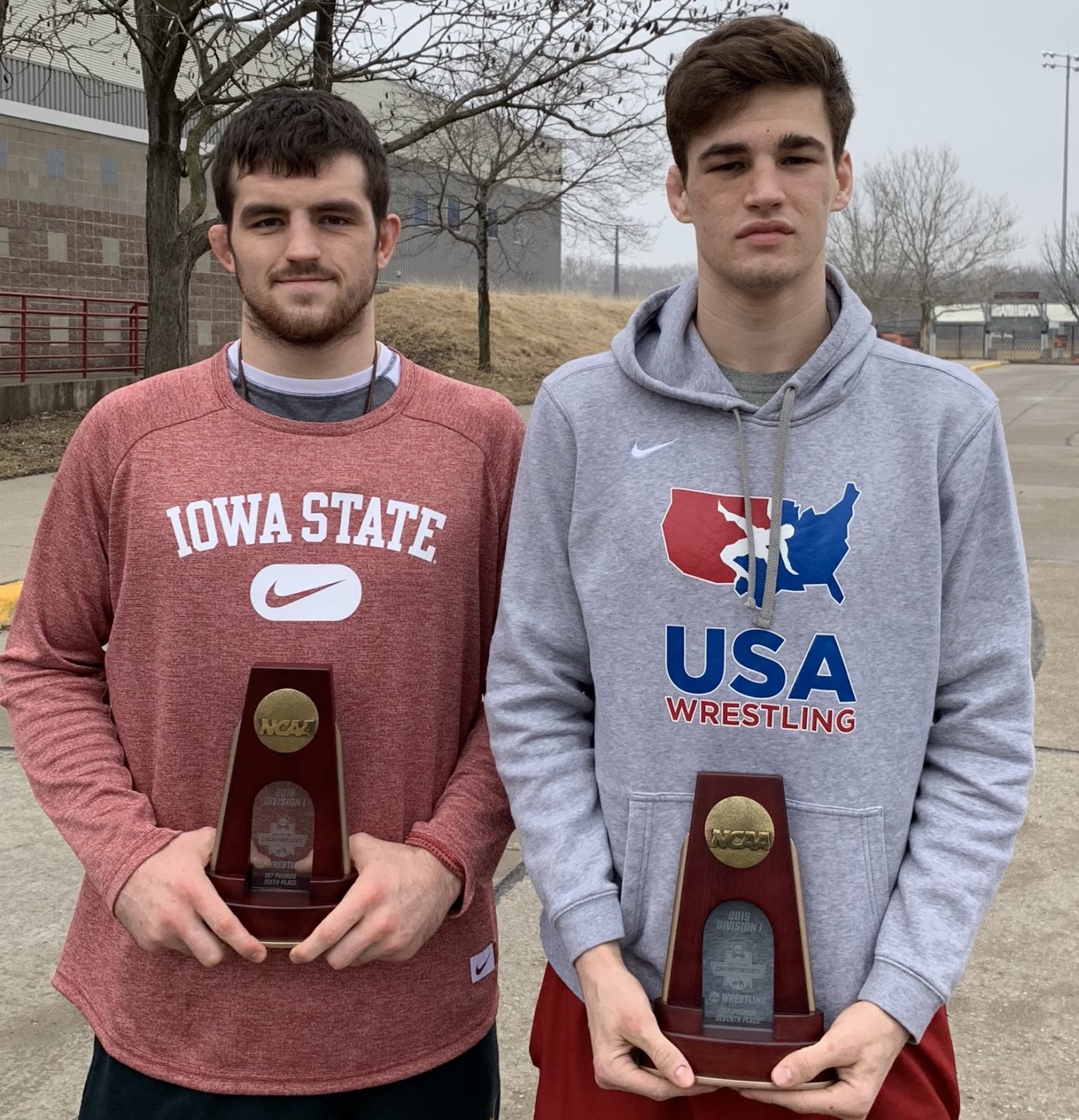 The obvious downside with being tall in a sport with weight classes is that you have less muscle mass than a shorter competitor. It’s also more difficult to attack the opponent’s legs and defend your own when your head, arms, and hips are higher than theirs (which is why a good wrestling stance is low to the ground). The advantage is that a longer reach can help with getting to the opponent’s legs and finishing the takedown even when they manage to sprawl. Length also can help defensively, as it’s hard to get control of a tall wrestler’s hips, and reach can give a wrestler more options and more control in some positions. On top, length helps control all avenues of escape at the same time, keeping forward pressure while staying behind the opponent. Oftentimes, especially down on the mat, a taller wrestler will feel stronger than a shorter one; his numbers in the weight room might be lower, but the tall guy is able to get to a more biomechanically advantageous position to exert force. For example, sprawling on a single leg, someone with short arms might be barely holding on to your legs, but someone with long arms could have his hands locked and his elbows slightly bent, ready to pull.

Under the tutelage of Derek St. John, himself a lanky wrestler and former national champ at 157 lbs, Degen has managed to use all of these tall wrestlers’ advantages to beat shorter opponents. While his gangly limbs make him appear less athletic than most wrestlers, he actually has very good balance and body awareness, and is very good at keeping his hips underneath himself. In this match with Nebraska’s Colton McCrystal he shows great defensive ability against each of the “Big Three” leg attacks: the double leg, the single leg, and the high crotch. The entire match is worth a watch, but the highlights come at 0:24, 5:12, and 7:09 of the video.

Degen can also threaten from an overhook, clamping down and stepping in to give the impression he might have a throw or footsweep coming. While he doesn’t really score with those moves, the threat is often enough to neutralize his opponents’ underhook game, making them less aggressive from there. Here he makes Steve Bleise realize that an underhook isn’t a great position to be in against Degen.

This is an issue for Lugo, as the left hand underhook has become one of his default tie ups. However, Lugo seems to use it more as a safe tie to hang onto than as an aggressive setup, so taking it away from him might make him uncomfortable but not really take away his offense. The bigger

For all his positive qualities, Jarrett Degen isn’t much of a leg attacker. He’ll shoot occasionally, but against high-level opposition he scores more on counters than on his own offense. Lugo will almost certainly be the aggressor, and the match will be decided by who wins the battles following the Hawkeye’s shots. Since Degen is a right leg lead and Lugo loves the lefty underhook, attacking the opponent’s right side, we’re likely to see righty high crotch and knee pull shots.

The defensive wrestler generally locks his hands around the waist or through the crotch, and tries to lift his opponent to create space and scoot around for a go behind or create an angle for a near side cradle. The offensive wrestler has several options, including jumping his body to the far side and splitting the legs. Wrestlers who shoot high crotches, especially to the right side, have to be proficient from this position, and Lugo has had success against some very good wrestlers.

Here, Lugo keeps his hips low and circles to the inside against Ohio State’s Micah Jordan. He uses his own leg to scoop Jordan’s and pull it toward himself, allowing him to split the legs and finish with a double leg.

However, Degen is excellent from the other side of this position, and turns his opponent’s attack into a scoring opportunity for himself. His long limbs make it easier to hook the opponent’s leg and pull himself around the corner. In last year’s dual meet he did just that, taking Lugo down and eventually winning in overtime.

One solution for Lugo is to shoot head inside and avoid the crackdown position. He will sometimes shoot a knee-pull single, reaching with his inside hand before pulling himself around into a single leg position. Here he sets up a high crotch against Lehigh’s Jimmy Hoffman and then turns it into a head-inside single leg.

Degen has struggled with Northern Iowa’s Max Thomsen, a wrestler with a comparable resume to Lugo. Earlier this season, Thomsen defeated Degen 12-7. One reason for his success is that Thomsen more commonly shoots singles and doubles rather than high crotches against Degen, avoiding the danger zone. He also keeps his hips low to the mat and progresses slowly, limiting the risk of a counter. If Lugo has studied the tape, he might try to replicate some of Thomsen’s approach on Sunday.

Apart from the crackdown position, one of the main questions in this match is whether Lugo can get off bottom. In both matches he has scored escapes, but has also gotten flattened out and lost a lot of time stuck on the bottom. It will be crucial to get out before Degen can get his legs in and break Lugo down.

Who scores first will also be important in this match. Degen is not well suited to chasing a lead, and if he gives up a takedown or two he’ll have trouble catching up. In the past Lugo continued to shoot even after building a lead, but I imagine Lugo will learn from their past encounters and pick his spots carefully. Conversely, if Lugo falls behind and has to force shots, he’ll be walking right into Degen’s wheelhouse. The Iowa State wrestler’s advantage on the mat means the onus is probably on Lugo to make things happen from neutral. This match will take place at Iowa State, so Lugo won’t have the notorious home crowd at Carver Hawkeye Arena coaxing the referee into quick stall calls. This makes it even more important that Lugo not fall behind.

For a wrestler the size of Degen, weight can be a factor early in the season. The loss to Thomsen raises even more questions about whether the Cyclone is at his best at this point. Degen should be close to 100% on Sunday, and will have gas in the tank to compete the entire seven minutes. Lugo is motivated to win a title in his final season, but he won’t have enough to overcome a matchup like this. Degen is the pick and the match should be handicapped at -200/+170.