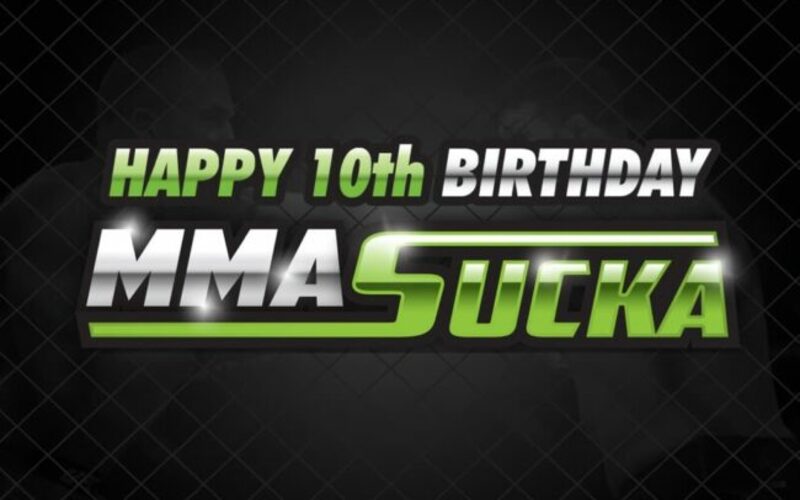 Wow. I can not believe it was 10-years ago today that MMASucka.com was created. The creation story is funny, well to me at least.

My wife was off work on maternity leave and was doing some baking at home. We figured we could get a little creative and make a small business website for her baked goods. So I fired up the oldest Macbook known to man and used iWeb to build a crummy little website. We uploaded pictures of her baked goods and added a few small articles. I personally did not have a love for baking, but I did have a love for mixed martial arts. This is where things took a turn.

It was easy enough to build a website on iWeb, so what happened next was MMASucka.com. The name came to be because Mr. T was the man with the A-Team, so why the heck not. The first article that was written was about UFC President Dana White’s favorite razor. Wow, we have definitely come a long way. From fighter diaries to many different podcasts, to some of the best interviews on the web.

Needless to say, the baking website is no longer.

Very shortly after the site launched, I was approached by a fella from a company called FightCaps and he offered to rebuild on WordPress. That is where we continue to hold our work, however, the design of the page has gone through many iterations.

Enough of the rants from me. Let’s get some of our friends, writers and former writers to give their input on MMASucka.com.

Trevor Dueck – I will forever have great memories of my time writing and podcasting at MMASucka.com. We were one of the few sites that had a podcast back in the day. I enjoyed going into a stinky old boxing gym and recording our show. Or the times we went to MMA events around the Province, including our first UFC shows in Vancouver, Seattle, Calgary etc… Jeremy was so supportive and selfless. It’s a big reason so many writers have gone onto big things after their time at Sucka. Happy ten years!

Carlin Bardsley – MMASucka was a proving ground for many who have gone on to do great things in the space, Jeremy was and is a great person to work under and gave great creative freedom to anyone looking for an opportunity. It’s still one of my “go-to” sites and it’s because of the quality involved. 10 years flew by fast, the next 10 will as well. Congrats, MMASucka!

Justin Pierrot – It was and still is a great site, and launching point for many still involved in the larger MMA media. Plus, it was just fun to write for during my time.

Nick Baldwin – The first gig I had in MMA — besides my own website — was at MMA Sucka. I joined the website in July 2014, well before I could even drive a car; I’m grateful that Jeremy took a chance on and gave a platform to a little kid. I very much enjoyed my time at Sucka, as the freedom given to me to write what I wanted allowed me to grow as a journalist. Congrats to the squad on 10 years!

James Lynch – Thankful to Jeremy for letting me use MMASucka as a platform to host my Q&A’s each month. I still do weekly Q&A’s with theScore because of this opportunity and I’ll be forever grateful. Congrats to Jeremy and the rest of the team on 10-years!

Edward Gallo – I’ve still got a long way to go, but I absolutely could not have reached where I am today without MMASucka. Jeremy and the team took me on when I had no experience and only a single sample to show for myself. They believed in my potential and gave me the freedom and support I needed to really grind and rapidly build experience as a writer. Because of MMASucka I’ve made great friends, important connections, landed a book deal and started a career I never thought I could have. Sure, it took a ton of hard work and I definitely got lucky. However, if you’re someone with talent and motivation who just needs a platform that will give them a chance, MMASucka is always happy to provide that opportunity. Without people like Jeremy and the writers he’s brought up, the combat sports media landscape would be a lot less colorful. Thank you for everything, happy 10 years!

JP Lasaleta – The last 10 years have been crazy! It’s been fun seeing all of the talent develop from our grassroots site to other areas in MMA or media. It’s also been a platform for me to learn and develop video and photography skills for producing content for the site and for the YouTube channel. Thanks for all the opportunities and looking forward to more fun in the coming years!

Blaine Henry – MMA Sucka has the best group of guys in the game. The site is where I first cut my teeth in the mixed martial arts game and learned so much from Jeremy and company. Having now been around for ten years, Sucka’s longevity is a testament to itself. Period.

Darcy McBride – As a young guy in the broadcast game fresh out of school, MMASucka welcomes me aboard & allowed me an outlet for not only my own Podcast but to better develop myself as a media member overall, beginning with UFC 115 in Vancouver. Huge respect & Congratulations to Jeremy Brand & all the people who dipped their toe in the MMASucka Pool, 10 years is a hell of an accomplishment, cheers!

Michael Fiedel – On MMASucka’s 10th anniversary, I just wanted to extend a formal thank you and congratulations to one of the best MMA news teams in the business. Having written at MMASucka in the past, I can vouch for the site’s talented crew of writers, analysts, and MMA thinkers. The site’s editorial team of founder Jeremy Brand, wrestling guru Ed Gallo, managing editor Michael DeSantis, the great Brian Gerson, and others ensure that the team produces high-quality and accurate work while keeping up a quick pace to match MMA’s rapidly changing environment. MMASucka is one of the few homes to extensive fighting analysis, with in-depth breakdowns, predictions, and recaps. Brand and MMASucka took a chance by allowing a (then) high schooler like myself to contribute to such a well-established brand, and for that I am both forever grateful and proud. Here’s to another ten years!

Nelson Yeo (Photographer) – I have been with MMASucka since day 1 and I still look forward to shooting pics at the next MMA card.

Tanner Russ – Congratulations to MMASucka, Canada’s leading MMA website and it’s benevolent overlord Jeremy Brand. Through Sucka, I’ve been lucky enough to travel distant lands and talk with fighters I’d only seen on television, and I’m so grateful for the opportunity. We here at Sucka are looking forward to another 10 years in the business. God bless and cheers.

Mike Lynch – Writing for MMASucka has helped my media career more than I ever imagined. The knowledge I have gained from my fellow writers and editors will stick with me for the rest of my career and for that I am thankful.

Dan Rose – I wanted to say congratulations to MMA Sucka for ten years covering the amazing sport of MMA. Jeremy is an awesome guy and it’s an honor for me to be part of such a special team. I’m late to the party as I’ve only been onboard a handful of months, but hope to be here in a big way for years to come. Congrats!

Frazer Krohn – As a relative newbie to Sucka, I’ve really enjoyed my time here. I don’t have many friends that are into MMA, so having people to discuss the latest goings-on with is great. With a great set of people involved, as well as a platform that encourages contributors to get frequent content out, I’m happy to be part of the team!

Ash Camyab – It’s amazing to be part of such a talented and diverse team at MMAsucka. The wealth of knowledge in the staff is unbelievable, and it’s great to be part of the discussion both through our articles and our behind the scenes discussions. I can’t wait to see how much Sucka will grow in the next 10 years.

Jay Golshani (Battlefield Fight League) – Since their inception 10 years ago, MMA Sucka has been a key ingredient for local fighters here to get maximum exposure. Their coverage through interviews, documentaries and online media has been a monumental platform for fighter exposure on the west coast.

Sabah Fadai (Rise FC) – Rise FC would like to congratulate MMA Sucka on its 10th anniversary. MMA Sucka has done a phenomenal job covering the sport and generating exposure to the majority of our local athletes. They have great staff and are incredibly professional and easy to work with. Keep up the great work.

Onward and upward. Here are to the next 10 years folks. Keep on keepin’ on.