What’s Next for Kamaru Usman? 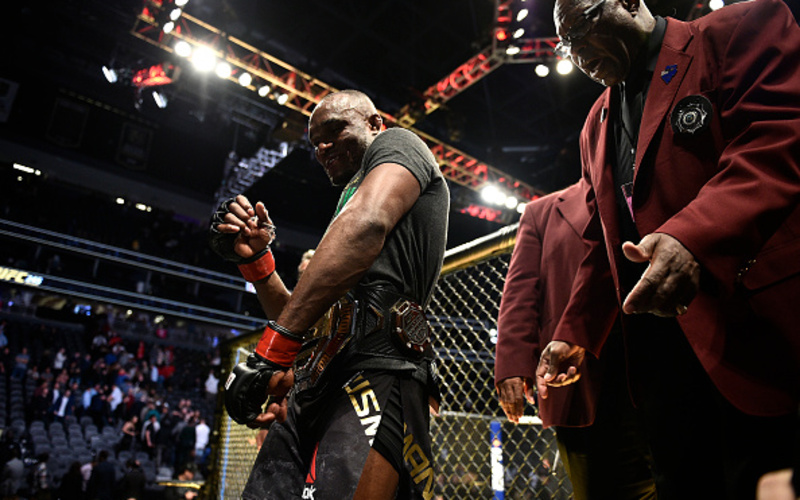 The bad blood between welterweight champion, Kamaru Usman and Colby Covington has been settled. The conclusion of UFC 245 saw both men partake in the fight of the night, battling it out until the final minute. In that last minute, Usman would successfully defend his title for the first time as he finished Covington by TKO. Both men fought a very close fight, with it being a split draw on the scorecards going into round five.

Covington fared well early, pressuring Usman and using his volume to out-land his opponent in rounds one and two. ‘Chaos’ seemed to slow down in the third round, however, as Usman picked up the pace, using front kicks and uppercuts to the body that he was having success with all night. Usman more than tripled Covington’s total strikes in that round, out-striking him 29-8. In between rounds three and four, Covington would tell his corner, “I think I broke my jaw”.

That would not hold him back as he came out looking good again in round four, keeping things close and finding success with his striking again. The fifth round looked the same as both men continued to find success with their striking, before Usman would finish things. Two knockdowns in the span of seconds and unanswered ground and pound forced referee Marc Goddard to step in.

After silencing the antics of Covington and proving he is the best, now it is time to look ahead for Usman. Assuming that an immediate rematch is off the table, there are two men worthy of the next shot at Usman. Those two men are Jorge Masvidal and Leon Edwards.

What’s Next for Kamaru Usman?

Option one is none other than the BMF himself, Jorge ‘Gamebred’ Masvidal. Only a few other fighters can claim they have had a better year than Masvidal. He kicked off his 2019 campaign in March in a main event spot in enemy territory against Darren Till. Masvidal came into that fight a loser of two straight, dropping decisions to Demian Maia and Stephen Thompson. Meanwhile, Till was coming off a title fight loss to former welterweight champion, Tyron Woodley. Masvidal finished Till in the second round that night, only needing one punch to do so. He would also spark his “three piece with a soda” line that night after a post-fight altercation with Leon Edwards backstage.

The big win would earn him a meeting with Ben Askren during International Fight Week at UFC 239. The build-up to the fight included plenty of trash talk between the two, with Masvidal promising to knock Askren out. He delivered on his promise, and did it with the fastest finish in UFC history, knocking Askren out in five seconds with a running flying knee. The win launched Masvidal into superstardom and he quickly would get the biggest opportunity of his career as a result.

His win over Askren inspired a call-out from none other than Nate Diaz after he defeated Anthony Pettis. Fans clamoured for a match-up between these two as it promised to be nothing but fireworks. It would quickly be announced that the two would headline the UFC’s return to Madison Square Garden at UFC 244. Plus, the UFC would make them a special belt in order to crown the “Baddest MotherF–ker in the game”. Masvidal capitalized on the opportunity at hand and put on a wonderful performance against Diaz. He would get the TKO win after the third round by doctor’s stoppage due to multiple cuts on Diaz’s face. After Usman’s win, UFC president Dana White revealed that Masvidal has his vote for who should be next in line.

Dana White (@danawhite) says after tonight Kamaru Usman (@USMAN84kg) vs. Jorge Masvidal (@GamebredFighter) is a big title fight and he'd like to make it.

There is another man that could be just as deserving for a shot at the title. That man is England’s Leon Edwards, who has not lost since he first met the champion in 2015. Edwards and Usman met in 2015 at UFC on Fox 17 as Usman won the fight by unanimous decision. Since then, Edwards has taken out every opponent put in front of him, all eight of them. His last three wins are easily the most notable as he started off with a fight against Donald Cerrone. The pair met in the main event of UFC Fight Night 132 as Edwards fought his way to a unanimous decision victory.

Edwards went on to fight on the UFC’s London card that following March. The same card that would see Masvidal defeat Till in the main event. Edwards fought in the night’s co-main event as he took on Iceland’s Gunnar Nelson. The pair fought all three rounds as Edwards would be awarded the split decision victory. The win granted him another main event slot, this time against former UFC lightweight champion and former interim welterweight title challenger, Rafael dos Anjos. Edward’s found himself in yet another high-level fight, this time against a former champion. He would put on a great performance over dos Anjos that saw him get the unanimous decision win.

When Usman was asked what would be next after his win over Covington, he stated that Edwards would be the most “deserving”. He credited the fact that he has not lost since the pair first met. Usman even called Edwards the toughest opponent he has ever faced.

Usman has no problem defending the title against whoever the UFC puts in front of him, whether it be Masvidal or Edwards. If picking one worthy contender between the two is too much of a challenge for the promotion, why not book Masvidal and Edwards in an ESPN main event that will surely do numbers. Especially after the previously mentioned altercation that happened after their respective wins at UFC London in March.