Before the ball drops in NYC, six fighters are going to earn $1 million. PFL 10 sees the return of featherweight Lance Palmer who won last year’s tournament in an attempt to net another $1 million. He takes on Alex Gilpin who faced off twice in this season and defeated.

In the main event, two-time Olympics judo gold medalist Kayla Harrison takes on familiar foe in Brazilian Larissa Pachecho. The two faced off early this year with Harrison taking the win by unanimous decision. Despite the win, Harrison was not happy she couldn’t finish her opponent. She gets another opportunity to get a finish while Pachecho will look to upset the fac of the PFL.

In the co-main, Ray Cooper III made it to the finals last year but was unsuccessful, getting submitted by guillotine choke. He gets another shot when he takes on David Michaud who made a comeback after losing his first fight this season. Both fighters are hungry to get a memorable win and can possibly be fight of the night.

Also returning is last year’s lightweight winner Natan Schulte. He takes on Loik Radzhabov who has only lost once in his entire career of 15 pro fights. In the light heavyweight category, Argentinian Emiliano Sordi decided he didn’t want to get paid by the hour. He finished all his fights before the third round. He takes on University of Iowa wrestling standout Jordan Johnson.

To get caught up with some of the fighters of the season, check out our media scrum interviews from the pre-fight press conference here.

You can catch the prelims on ESPN+ and catch finals on ESPN 2.

Ray Cooper III def. David Michaud via TKO (punches) at 2:56 of Round 2

Emiliano Sordi def. Jordan Johnson via TKO (Punches) at 2:01 of Round 1 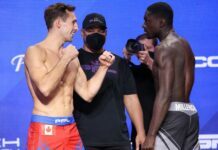