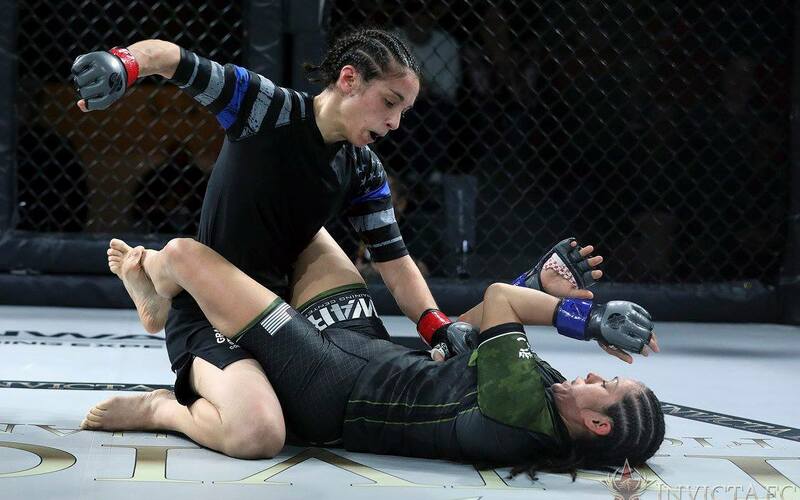 Ashley Cummins is gearing up for arguably the biggest fight of her MMA career: a crack at the Invicta Fighting Championships atomweight crown. She’s slated to fight champion Jinh Yu Frey Friday at Invicta FC 39.

This marks the first professional title shot of Cummins’ 11-fight professional career, and she feels it couldn’t have come at a more perfect time.

“In the past, I was frustrated when I didn’t get a title shot,” she told MMASucka. “Now I feel like it wasn’t my time. The stars have aligned for me.”

Cummins lauds 10th Planet Jiu-Jitsu San Diego as the reason behind her preparedness for not only the title shot, but her rematch with Frey. At 10th Planet, Cummins has a slew of high-level women to train with. Bellator flyweight queen Ilima-Lei McFarlane, former UFC title challenger Liz Carmouche and former Invicta flyweight title challenger Pearl Gonzalez are just a few. She believes that’s part of what was missing at her old gym, Wolves Den, in St. Louis.

“I had a lot of great coaches and great training partners who were men [at Wolves Den], but I was missing that aspect of high-level females pushing me,” Cummins explained. “Now that I’ve moved to San Diego and I’ve been here for over a year-and-a-half now, and I’m settled in, I’ve learned and grown so much in my new gym, I feel like the time is perfect for me.”

As for what winning the Invicta atomweight title would mean to Cummins? Everything.

“That’s been my goal for 13 years in this sport: to be a world champion as a professional,” she said. “I’ve worked so hard since college, and I’m 32 now. One of my life goals would be coming true.”

Cummins vs. Frey marks a rematch of their Invicta FC 24 encounter in July 2017. Frey took a unanimous decision on the back of her wrestling. Cummins came close to snagging a submission on multiple occasions, but ultimately, the judges valued Frey’s top control. She feels she can learn from the mistakes she made in the duo’s first bout and defeat Frey in the rematch.

“The first thing that went wrong was I went into that fight expecting her to do one thing,” Cummins said. “It’s an MMA fight, and anything can happen. You can’t just expect, ‘My opponent’s going to do this, my opponent’s going to do that.’ That’s not what happened. She did the complete opposite of what I thought her game plan was going to be. I think it messed me up mentally in the middle of the fight, as I was thinking ‘Oh shit, she keeps shooting for takedowns. I wasn’t expecting this.’ I learned to not have a certain way played out in your head how the fight will go.”

For the technical aspects, Cummins said she learned she needed to improve her takedown defense. She said ever since that fight, she’s been drilling wrestling non-stop, as well as every aspect of MMA. She also learned a key is to get back up instead of only going for submissions.

“Every fight, I learn,” she said. “Obviously, you learn more when you lose compared to when you win. Every fight, I try to look at it and see what I can do better and where I can improve. I’m my own worst critic, and I’m very hard on myself, so after every fight, win or lose, I make sure I take something from it and get better.”

Following the loss, Cummins defeated both Stephanie Alba and Jessica Delboni via unanimous decision. The Delboni fight was her first bout since joining 10th Planet.

“I’m a completely different fighter now,” she said. “I’ve been at this gym for over a year-and-a-half. Even my last fight, I’d only been at 10th Planet for three months, so I wasn’t settled in and used to the coaching and gym. I was still getting my feet wet, so now that I’ve been here for over a year, I feel like I’ve grown so much in every aspect of MMA. I feel like a completely different fighter.”

Since Frey’s win over Cummins, she won the vacant Invicta atomweight title against Minna Grusander and then defended it against the same opponent. Both fights were airtight decision wins for Frey. Her title-winning performances were sandwiched between a pair of losses to Seo Hee Ham in Road FC and Ayaka Hamasaki for the RIZIN title.

Cummins said she has a lot of respect for Frey and called her a skilled and talented fighter. She said her opponent is intelligent in the cage and a tough fight.

“She’s obviously one of the best in the world, and that’s what I’m trying to become,” Cummins said. “I’m trying to be the next champ. I’ve been able to rebound since our last fight. I’ve gotten two wins, and my last win was against a really good opponent who was undefeated. I was able to prove I am one of the best, and I’m ready for a title shot.”

The two were originally supposed to meet at Invicta FC 37 in October 2019, but Frey suffered an injury. Four months later, the elite atomweights will square off.

“I was disappointed at first, but I try to believe everything happens for a reason,” Cummins said regarding the cancellation. “The extra time was nice to tighten things up and get better as a martial artist.”

Should Cummins win, she’ll have accomplished one of her major goals in the sport: become a world champion. Her next goal is to fight in the UFC.

“I’ve come close twice, and both times, it didn’t happen. Those two times I came close, it was at 115 pounds. I know I’m a 105’er. When I fought at 115, I was just too small. I just really hope I can achieve my dreams of being a UFC fighter, but that’s on them creating that weight class. Right now, I’m just too small for 115. I’m hoping in 2020, that’ll be the year for the atomweights.”

Invicta FC 39 goes down Friday at 8 p.m. from the Memorial Hall in Kansas City, KS. The card will air live on UFC Fight Pass. Jihn Yu Frey vs. Ashley Cummins II will serve as the main event.

In terms of a prediction, Cummins feels it’ll be a grind-heavy affair.