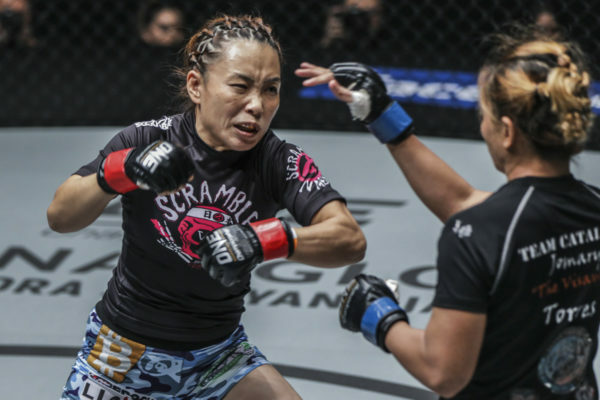 ONE Championship returns to the Singapore Indoor Stadium on Friday for its next premier event of 2020, ONE: KING OF THE JUNGLE.

The lead card slate in Singapore features multiple World Champions and high stakes battles with potential title implications. It’s an event fans will not want to miss. Need to be prepped on each lead card bout heading your way? Find out why you will need to stock up on snacks in your preview of the ONE: KING OF THE JUNGLE lead card.

Find out all the details about how to watch the lead card bouts in Singapore in your area.

Stepping in on short notice, undefeated Denice “The Menace” Zamboanga has everything to gain and nothing to lose against the veteran Mei “V.V.” Yamaguchi.

The Japanese standout has won four straight in her bid to get back to an atomweight title clash against Angela Lee, and defeating the 23-year-old will help bolster that claim. But “The Menace” can usurp her position with a stunning upset to announce a changing of the guard.

Major atomweight implications are on the line when the Filipino tries to shock the world against the Riki Gym, Gods, and HybridFighter representative in the final lead card match-up in Singapore.

Worthen has begun his professional career with six consecutive victories, and running that total to seven against “Tyson” will make him a true contender in the bantamweight division. However, the striking prowess of the Kiwi cannot be taken lightly as he has finished 11 of his 19 wins by knockout.

The winner will take a step into the upper echelon of the division with eyes toward the gold in 2020.

It will be guaranteed fireworks when Shannon “OneShin” Wiratchai and Honorio “The Rock” Banario meet at ONE: KING OF THE JUNGLE. Both men are trying to right their respective ships and get back in the win column.

Banario, a former ONE Featherweight World Champion, hopes to work his way back up the ladder to reclaim his belt. In order to do so, he’ll have to walk through the power of Wiratchai, who has been battle-tested against the cream of the crop.

The two warriors combine for 17 finishes in their 23 professional victories. With the pressure to start a new winning streak, expect both men to look for a finish and make this a sleeper for Bout of the Night.

The film Dangal was based on the famous Phogat wrestling family and was India’s highest-grossing film at the time of its release. Phogat decided to go after mixed martial arts glory instead of chasing the Olympic dream, and she made her debut with a dominant victory last November. Representing Evolve MMA, “The Indian Tigress” will try to show off her new skills to a worldwide audience.

Wu will be looking to derail Phogat’s rise up the atomweight ranks and show that she still has a lot to learn. “Miss Red” will try to stifle the wrestling from the Indian phenom and establish herself as a significant player in the atomweight division.

Promotional newcomers meet in a clash to see who can keep their momentum going under the bright lights of ONE.

Russia’s Murad Ramazanov is a perfect 8-0 in his young career with six finishes under his belt, but Bae “Wolverine” Myung Ho will be his most experienced opponent to date. The South Korean is unbeaten in his last ten outings, including a 2012 victory over Li Jingliang by decision.

It’s experience vs. youth in this welterweight affair.

In the opening bout of ONE: KING OF THE JUNGLE, Canada’s Jeff Chan makes his promotional debut against Singapore’s Radeem Rahman.

Chan is a successful martial arts coach and teacher to students all over the world through his MMAShredded social media and YouTube accounts. He has moved to Montreal to train under Firas Zahabi at Tristar and improve his all-around mixed martial arts game. His opponent, Rahman, represents Phuket Top Team and has been competing in ONE since 2011.

With no in-stadium attendance, each and every strike will echo throughout the venue in what should be an exciting start to the event that elevates the winner into the hunt in the bantamweight division.