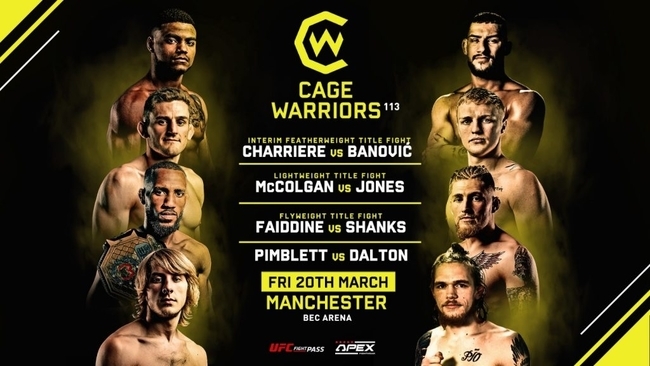 As we know, event promoter AEG closed the doors of The O2 in London due to the Coronavirus pandemic. This forced futile efforts to relocate and salvage UFC London scheduled for this weekend. However, Cage Warriors 113, booked for the same venue this Friday, has been relocated to Manchester.

After finding out The O2 London was closing its doors until further notice, the event was in doubt. Cage Warriors President, Graham Boylan tweeted that the venue was closed and in turn, the event was off.

?In the past hour I have been told AEG will close all venues until further notice so @cagewarriors LONDON wont happen Friday. ?

Despite this gargantuan roadblock, Boylan swiftly responded by confirming the card’s relocation to the Manchester BEC Arena in a dramatic turn of events.

I & team have spent the past 45 mins moving the entire event to Manchester. The event is ON, just relocated and still behind closed doors. #cw113 @CageWarriors pic.twitter.com/bsyGLpqRvd

One of the many reasons UFC London was forced into cancellation was due to travel restrictions. The USA extended it’s travel ban to the UK and Ireland on Monday, making travel for US fighters virtually impossible. This, in turn, rendered many UK based fighters on the card unable to travel to a possible relocation in the USA, as well as not having the correct working Visa.

Due to these restrictions and the card’s eventual cancellation, some UFC fighters will fight at Cage Warriors 113 instead. Cage Warriors confirmed these additions with an official statement.

UFC middleweight Darren Stewart and welterweight Bartosz Fabinski were originally scheduled to face Marvin Vettori and Shavkat Rakhmonov respectively at UFC London. Stewart, who competed four times for Cage Warriors before the UFC picked him up will be back in his old stomping ground on Friday. Fabinski agreed to move up to middleweight and welcome Stewart back to Cage Warriors.

Former Cage Warriors title challenger John Phillips also finds himself back in familiar surroundings. Room has been made for his bout with Dusko Todorovic on Cage Warriors 113 too.

UFC fighters are contractually strictly forbidden from competing with other promotions, but exceptional permission has been granted. Given the lack of UFC events over the next few weeks and fighters’ determination to compete and get paid, maybe we will see more of this.

Fighters, such as Ashlee Evans-Smith expressed their desire to compete despite possible consequences. Evans-Smith was expected to face Liverpool’s Molly McCann at UFC London, and she was prepared to take risks to reap the rewards. She explained to Brett Okamoto:

Just spoke to UFC flyweight Ashlee Evans-Smith (@AshleeMMA), who is at the airport preparing to leave for UFC London.

"I am fully aware I am going to a foreign land to get in a fist fight without 100 percent assurance I can come home after without being quarantined."

As we’re aware, fighters are relying on competing for income, and most aren’t paid sufficiently to begin with. This leaves them desperate to compete and could possibly lead to more exceptional co-promotions.

Lerone Murphy and Danny Roberts are two fighters who were set to compete at UFC London. Murphy has twice gone out to Thailand for this training camp and Roberts has returned to Florida for yet another training camp. These trips don’t come cheap at all.

After a successful UFC Brasilia card behind closed doors, the UFC were the only major sporting organisation still operating. The cancellation of the UFC’s next three events will have left the masses in a heap of disappointment, but thanks to Cage Warriors 113, MMA fans are ensured their fix this weekend.