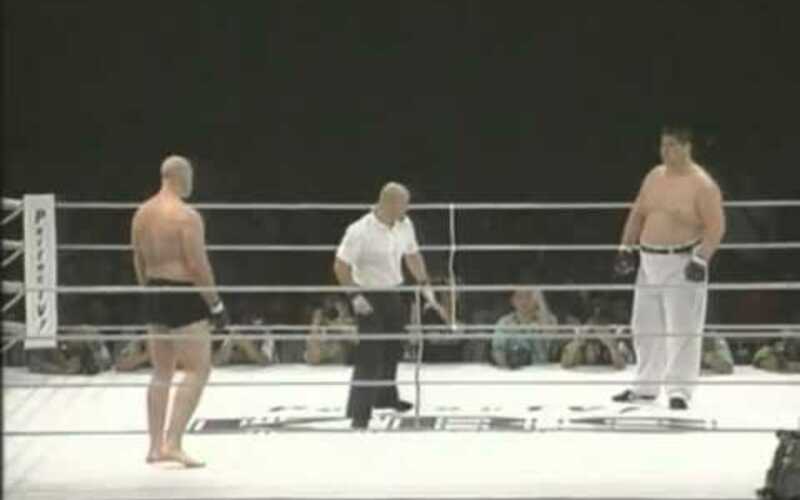 There is a lengthy history of pro wrestlers crossing over into MMA. From the nascent days of this sport, professional wrestlers have indulged their desire to go from work to a shoot. In this episodic series, I will review fights where pro wrestlers foray into the combat world. It’s like a weird, violent version of IMDB and I am DB (Dylan Bowker). This is Pro Wrestlers in MMA #2: Nathan Jones vs Koji Kitao.

This bout took place on the inaugural event for Pride Fighting Championships. It went down on October 11, 1997 and was a very different time for the sport. An endeavor not even known as MMA yet but was called no holds barred, reality combat, etc. The Tokyo Dome in Tokyo, Japan was filled with close to fifty thousand people and they took in quite the spectacle with Jones vs Kitao.

Nathan Jones is known for a relatively brief yet high profile WWE run where he was blindsided backstage prior to teaming with The Undertaker against Big Show and A-Train at Wrestlemania 19. When the bell rang for his Pride 1 bout, Jones instantly began bouncing on the balls of his feet.

Jones stays nimble and a comfortable distance from Kitao. Jones misses with a spinning crescent kick but the display was still incredibly compelling to see. Despite not connecting, to see a man who’s closing in on seven feet tall throw a kick like that is truly a sight to behold.

Kitao tried to secure a takedown but Jones got a front headlock and landed knees to the body. Kitao got the takedown after Jones looked to drive his knee into the belly another time. From there, Kitao was right into side control and Jones seemed to have absolutely no idea what to do from this position.

He grabbed at the back of Kitao’s head in vain while Kitao had his forearm pressing across Jones’ throat. Kitao then establishes wrist control, secured the Americana, and this elicits a tap from Jones. The sumo wrestler was victorious after the keylock and cheers rained down from the rafters.

This bout has been categorized as something called “a worked shoot”. For those unfamiliar with the vernacular, this refers to the practice of giving the illusion of athletic competition whilst the outcome has been pre-determined the whole time. A true confluence of pro wrestling and MMA on a performative framework kind of level.

Nathan Jones has described this dynamic being at play in the Kitao fight while being interviewed (at the 1:38 mark). In the early days of Pride FC, worked fights were certainly not uncommon across the first few events. Pride Neva Die.