First of all, what a fight this could be. It could be pitched as UFC vs Bellator. A combined record of 21-1 with both men being under the age of 26, they are both talented.

The UFC’s Sean O’Malley stands at 11-0 with eight finishes having returned this year after a two-year layoff. He has legitimate knockout power, as he showed on the contender series in 2017. He is also a purple belt in jiu-jitsu and can handle himself on the ground. O’Malley is also not afraid to speak his mind and trash talk his opponents to hype his fights up.

Bellator’s James Gallagher is one of the most recognisable faces in the whole promotion. He has headlined events twice and been then co-main event a number of times. With a karate based striking style, ‘The Strabanimal’ often leans on his awesome ground game. The Straight Blast Gym fighter hasn’t had a fight where he hasn’t trash-talked his opponent, tried to get in their face at every opportunity and often crosses the line. Only once has he tasted defeat but has bounced back since with three consecutive wins.

Why this fight would be such easy matchmaking is because these two men are both confident, brash and talented. The build-up to this one would be something to keep us entertained and the fight between these two talented young fighters would be sure to hit the heights expected.

Dan Henderson had such expansive career longevity that it’s hard to determine when exactly his prime even was. Regardless of this, Dan Henderson and Chuck Liddell’s careers do have some overlap. They realistically could have competed against one another. In fact, had Liddell defeated ‘Rampage’ in their UFC 71 rematch, Liddell could have been the one fighting Henderson in a PRIDE/UFC unification bout at UFC 75. Unfortunately, the stars just never quite aligned for this to happen.

I think the Chuck Liddell, who defeated Randy Couture at UFC 57, would have been a hell of a fight against the Dan Henderson who TKO’d Fedor Emelianenko. If I had to choose a victor, I would slightly lean towards Liddell. His powerful striking, iron chin and takedown defense was a lot to handle. Though this was far from the case in the end, Liddell was once the kind of fighter who could absorb a power punch from Henderson. Some people downplay Liddell’s skillset in hindsight, but that man was dangerous in his heyday.

Now, this is a fight I really want to see. From a geeky footwork nerd’s point of view, this would be arguably the best two people to watch fight it out. Vasyl Lomachenko is arguably one of the greatest boxers at being able to hit and not get hit. Of course, Floyd Mayweather Jr was the king of this for so many years but as of late, Lomachenko has taken over. With a background in Ukrainian dance, Lomachenko effortlessly shifts his weight from foot to foot, ducking and weaving away from his opponents attempted strikes. A two-time Olympic gold medalist, Lomachenko is one of the best pure boxers out there today.

Don’t get it twisted, however, the Ukrainian is not just able to lay hands on you…

Vasyl Lomachenko has legitimate skill with his legs, as we can see in his Instagram video. We’ve also seen him show some wrestling ability so an MMA fight down the line could have potential. If he ever were to step in the octagon, we all know who he should be matched with.

Dominick Cruz is certainly up there for the bantamweight GOAT conversation. The two-time UFC bantamweight champion has only lost twice in his career, of which one he avenged…twice. Cruz’s footwork and elusive style is what makes him stand out in all of MMA. We haven’t seen anyone like him before and it will be some time before we see someone do his style as effectively as him. Want to learn how to move like Cruz, click here!

Would this be a good fight? Well, I’m not sure. With both of these men being so good at movement and staying elusive, would either land a glove on the other? Maybe not, but for footwork geeks like myself, this would be a great spectacle to watch and would also be brilliant matchmaking. 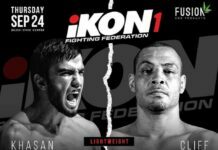