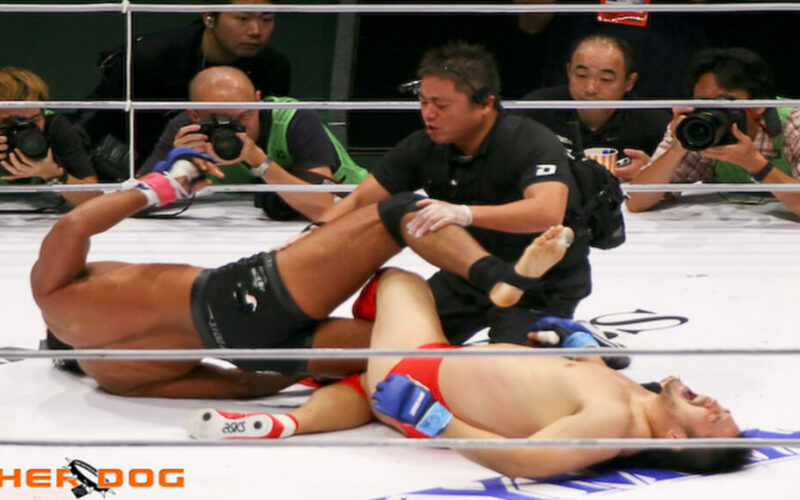 There is a lengthy history of pro wrestlers crossing over into MMA. From the nascent days of this sport, professional wrestlers have indulged their desire to go from work to a shoot. In this episodic series, I will review fights where pro wrestlers foray into the combat world. It’s like a weird, violent version of IMDB and I am DB (Dylan Bowker). This is Pro Wrestlers in MMA # 6: Masakatsu Funaki vs Ikuhisa Minowa.

This at DREAM 6 bout took place prior to Minowa’s run where he became DREAM Super Hulk (Hluk) champion. Technically both competitors have the Pro Wrestler tag. But Funaki will be the one whose performance will be evaluated for this. Funaki had begun his career with notable runs in Pro Wrestling with NJPW and with the worked-shoot oriented promotion UWF.

He then moved over to the world of shoot fighting with notable Japanese MMA progenitors Pancrase. Funaki would become a multi-time King of Pancrase. But heading into this Minowa fight, he was in a different spot in his career arc altogether.

Funaki was coming in on a three-fight losing streak and it had been over nine years since the last time he tasted victory.

Conversely, Minowa was entering this bout on the heels of defeating Don Frye. Minowaman bested the UFC Hall of Famer via first-round kneebar at DEEP-Gladiator in August 2008. Minowa had 68 career MMA bouts heading into this September 2008 fight. Though he would eventually make that walk well over a hundred times. Funaki had over fifty career mixed-martial-arts fights to his credit at this point.

As soon as the contest started, Funaki began circling and pawing out the lead hand. Both men are trying to get a sense of the other’s rhythm as Funaki throws a leg kick that misses. The Pancrase legend followed up with a spinning kick to the body which led to a scramble, Minowa secured the takedown and Funaki got himself into a shrimping position.

Ikuhisa “The Punk” Minowa began looking for some ground and pound strikes with a scramble subsequently happening. Both end up in a 50/50 position and are working for their own leglocks. Each man is looking to maintain that confluence of defensive savvy while being offensively efficient.

Funaki isolates an ankle while Minowa tries to roll and get out of it. Eventually, Masakatsu Funaki’s persistence pays off, and he illicits the tap from Minowa. This would mark the final win in the MMA career of Funaki and got it done less than a minute into the first round.