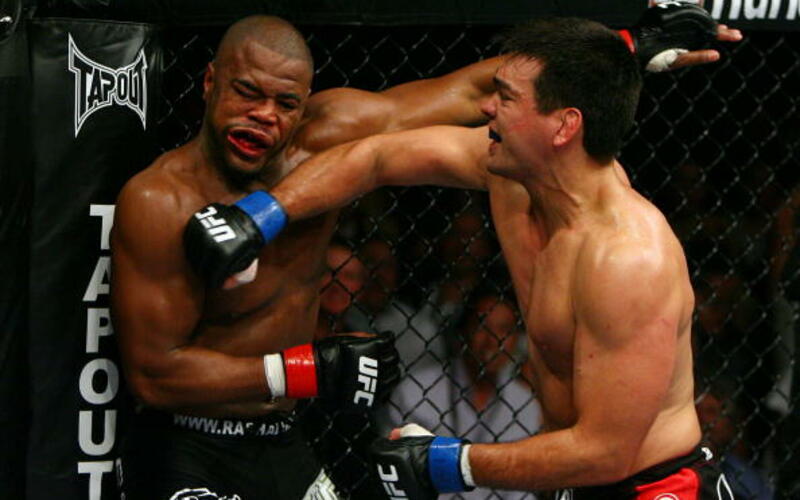 We’re back with a new Today in MMA History article. Even though the UFC is back after hiatus due to COVID-19, MMASucka has decided to continue to take a look at some fights from the past. Today’s article looks back at the main event from UFC 98. That’s right, we are talking about Lyoto Machida knocking out Rashad Evans to become the UFC light heavyweight champion.

Coming into this fight both Machida and Evans had undefeated records. The first round was a little uneventful. Both fighters were throwing faints to try and get the other to make a mistake, but neither fighter would break. That was the case until, with a minute left in the first round, Machida connected with a kick to the body and a straight left to the chin that dropped Evans to the canvas. However, Evans was able to regain his composure and get back to his feet.

The second round was similar to the first, both fighters were searching for their range hoping the other would make a mistake. There was a flurry of exchanges midway through the round in which both fighters connected big shots. However, near the end of the round, Machida landed a left to the chin of Evans that buckled his legs. Evans was able to get back up and try and recover but Machida put the foot on the gas and was throwing relentlessly. Machida landed multiple punches and got Evans up against the cage, and that is where the end came. Machida was able to land a clean left hook to the chin of Evans that shut his lights off. Evans was knocked out for the first time in his career and Machida became the UFC’s light heavyweight champion at 3:57 of the second round.

Both fighters can be easily be called “legends” of the sport. After the loss to Machida, Evans would go on to earn wins over names like Tito Ortiz, Dan Henderson, and Chael Sonnen. However he would run into some tough times at the tail end of his career. He suffered a few knee injuries that eventually forced him out of the sport, and had losses to Ryan Bader, and Sam Alvey to name a few. His final fight came back at UFC 225 where he was defeated by Anthony Smith in the first round.

Like Evans, Lyoto Machida had some big fights in his UFC career. After winning the UFC title he would successfully defend it over Mauricio Rua but would end up losing it to Rua in a rematch. He had wins over big names like Randy Couture, Bader, and Gegard Mousasi. But he also lost some wars along the way to names like Jon Jones, Quinton Jackson and Yoel Romero. Machida would eventually jump over to Bellator in 2018 where he has had three fights. His last fight came at Bellator 228 where he lost a split decision in the rematch against Mousasi.