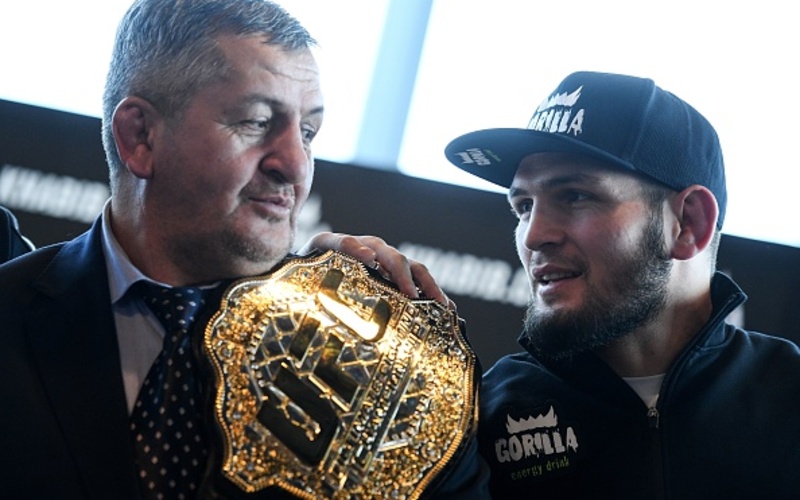 The MMA world recently lost one of its notable members. Abdulmanap Nurmagomedov, the father of UFC lightweight champion Khabib Nurmagomedov, passed away due to complications as a result of contracting COVID 19. Abdulmanap had been battling the Coronavirus for a long while and was placed in a medically induced coma in the last few weeks of May. As of now, Khabib has not made any public comments on the tragic passing of his father. We do know that the two were extremely close. In the immediate aftermath of his last appearance inside the octagon, Khabib invited his father to share the spotlight. Abdulmanap also accompanied Khabib when Khabib went to meet the President of Russia, Vladimir Putin following his victory against Conor McGregor at UFC 229.

Abdulmanap had been a coach and mentor to an entire generation of MMA fighters from Dagestan. His influence in the region was significant. Chechen leader Ramzan Kadyrov was present at the funeral of Abdulmanap to pay his respects at his untimely passing.

Prior to the onset of the Coronavirus pandemic, Khabib was set to face Tony Ferguson.  It was a highly anticipated bout for the lightweight title. It was a fight that the UFC had tried to put together four times prior. When the fight was canned because of the pandemic,  Khabib was scheduled to then face Justin Gaethje who beat Ferguson in an interim title fight.  It is unclear whether that fight will now proceed as intended. Gaethje tweeted:

So heartbreaking to hear this news of the Legend Abdulmanap Nurmagomedov. I’m very sorry @TeamKhabib You’re dad passed with a heart full of pride knowing you will carry on his legacy.

So heartbreaking to hear this news of the Legend Abdulmanap Nurmagomedov. I’m very sorry @TeamKhabib You’re dad passed with a heart full of pride knowing you will carry on his legacy.

Gaethje was not among many MMA personalities who voiced their condolences in a display of solidarity.