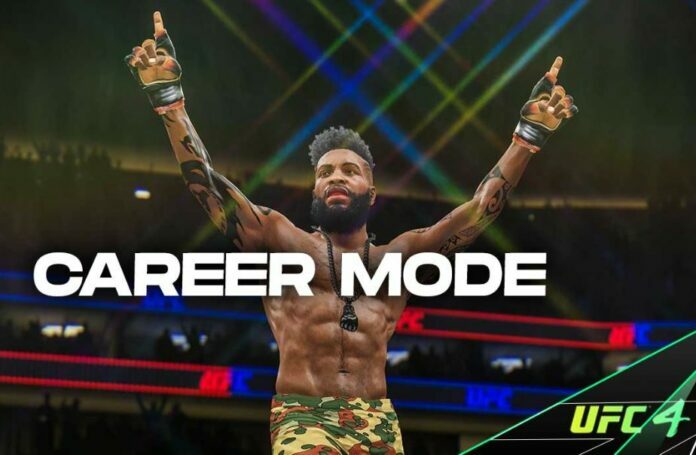 EA Sports UFC 4, the new MMA game being released by video game giant EA, has an all-new in-depth career mode trailer. With career mode, players follow a custom-made fighter through a career experienced in game. The new changes to career mode touch on some of the most important aspects of fighting outside of the cage.

UFC 4 allows fighters to gradually change their skillset over the course of their career. Players can focus on specific areas of their skillset in camps. However, the direction your skillset goes in will also be affected by what you use in fights. In addition, you can ask specific, already-known fighters to train with you in order to hone particular talents. This carries its own downsides – rough sparring in camps can create friction and drive former teammates away. In turn though, camp friction can be used to build hype for call-outs. The social media sphere is also a part of callouts, as are press conferences and interactions.

Fighters in UFC 4 begin their career either as an amateur, a fighter in the now defunct WFA, or a fighter on the Dana White’s Contender Series. Taking longer to go to the UFC allows fighters to build their skills, while competing on DWCS allows them a shot at the big time faster. If fighters hit a bad patch they may get cut from the UFC and have to claw their way back through the WFA. Injuries can also seriously affect a fighter’s career, forcing them to choose between pushing through them, potentially making them worse, or delaying fights and losing momentum as a result. These tough cost-benefit analysis choices simulate the tough decisions real fighters often go through.

UFC 4’s Career Mode allows, like in UFC 3, for fighters to challenge in other weight divisions after being successful in their own. Eventually fighters may even manage to become double weight division champions.