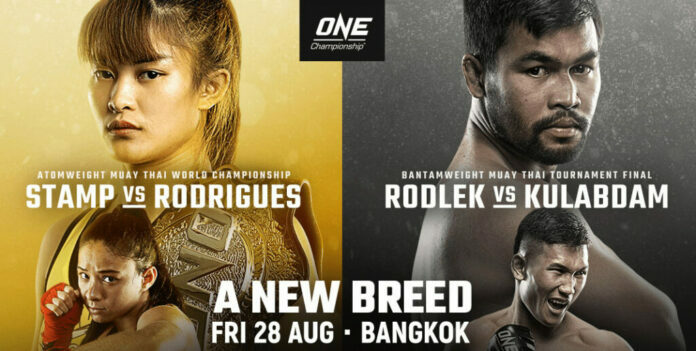 Before the action gets underway with the opening bell, let’s take a quick peek at each of the card’s bouts.

After making a triumphant return to mixed martial arts at ONE: No Surrender, Stamp Fairtex returns to put her Muay Thai strap on the line against Allycia Hellen Rodrigues in the main event.

This marks the first defense of the gold in over a year as Stamp chased history to become a three-sport World Champion.

The Brazilian, with a 30-5 professional record, makes her ONE debut in Bangkok in a title affair.

The atomweight division in ONE Super Series actions continues to grow with the addition of Rodrigues and the pound-for-pound queen Anissa Meksen. Stamp gets no rest with this title defense and will have to shine if she is to continue her historic bid.

Rodlek PK.Saenchai Muaythaigym was edged out on the scorecards by Saemapetch Fairtex at ONE: No Surrender II. However, an injury to Saemapetch put him back in the tournament with a chance at grabbing the title shot against Nong-O Gaiyanghadao.

But awaiting him will be the presumptive top-ranked contender, Kulabdam Sor. Jor. Uthai.

Kulabdam, currently third-ranked in the divisional rankings, is coming off a clean knockout of #1-ranked Sangmanee Klong SuanPluResort at ONE: No Surrender III. The KO cemented Kulabdam’s stock and made him the man to beat in the tournament.

A title shot is on the line, and these two elite bantamweight strikers will provide fans with the fireworks they are anticipating. It is a Muay Thai fan’s dream.

The third and final mixed martial arts bout of the evening puts top-ranked atomweight Denice Zamboanga in a tough position as she takes on unranked newcomer Watsapinya Kaewkhong.

The Thai athlete gets an incredible opportunity to announce herself on the global stage against the division’s top contender.

Zamboanga can firmly supplant herself as next-in-line to Angela Lee‘s title with an emphatic win, but this is a high-risk bout for athlete from The Philippines.

Wondergirl Fairtex made a stunning debut at ONE: No Surrender III, and she makes a quick turnaround for ONE: A New Breed against KC Carlos.

In less than 90-seconds, Wondergirl announced herself on the strawweight scene and as one of the division’s top contenders.

Will she be able to keep that going? Not if the Filipina has anything to say about it. She will look to steal the thunder of Wondergirl and derail the hype train as it leaves the station.

It marks the ONE debut for Zamboanga, the brother of Denice, as he looks to copy her success under the ONE banner. “Detchpool” is a veteran of Rich Franklin’s ONE Warrior Series who now gets a chance to prove himself on the promotion’s main stage.

Look for both men to try and impress when the lights shine down on them in Bangkok.

Huang Ding vs. Sok Thy

After unsuccessful outings in their previous matches, Huang Ding and Sok Thy will meet in ONE Super Series action where one will move back into the win column.

Huang was out-worked by Fahdi Khaled, and Mongkolpetch Petchyindee Academy got the decision nod over Sok Thy. Those losses are now behind them as they return to action in short order for this flyweight engagement.

In a stacked division, consecutive losses can put an athlete behind the 8-ball. Expect both men to give all they have to the fans to avoid that fate and get their hand raised.

Yodkaikaew Fairtex had an impressive showing in a win at ONE: No Surrender III. He makes a quick return to action in Bangkok for the opening bout of the evening against American Alex Schild.

The flyweight contest will give the victor a boost in a developing division with top names such as Adriano Moraes and Demetrious Johnson.

As COVID-19 continues to prevent normalcy in the sport, it does provide other athletes to make quick moves within the division and make a name for themselves.