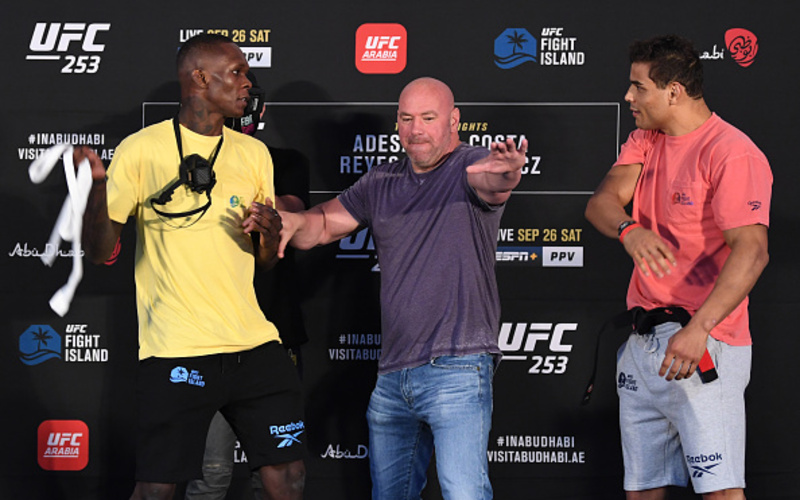 MMASucka provides you with UFC 253 results as two titles will be on the line. First, in the main event, Israel Adesanya puts his title on the line against the undefeated Paulo Costa. Plus, a new champion will be crowned at light heavyweight after Jon Jones vacated the title. Facing off for the vacant title will be former title challenger Dominick Reyes and Jan Blachowicz.

Once Adesanya entered the UFC in early 2018, he quickly earned an interim title shot with five straight wins. In that fight, he faced off against Kelvin Gastelum, winning by unanimous decision to become the interim champion. Following his win over Gastelum, Adesanya was matched up with the champion Robert Whittaker at UFC 243. Adesanya would become the champion that night as he knocked out Whittaker in round two. Since then, he has one title defense with a UD win over Yoel Romero. As for Costa, he started off his UFC career with four straight TKO finishes. Those wins came over Garreth McLellan, Oluwale Bamgbose, Johny Hendricks and Uriah Hall. He saw a third round for the first time in his career in his most recent outing. That fight came against Yoel Romero as Costa defeated him by unanimous decision.

Earlier this summer, Jon Jones has announced that he was vacating the light heavyweight title. Now, the vacant title is on the line between the last man to face Jones, Dominick Reyes, and Jan Blachowicz. Before facing Jones, Dominick Reyes put together impressive finishes over Chris Weidman and Jared Cannonier. He also earned hard fought decision wins over Volkan Oezdemir and Ovince Saint Preux. As for Blachowicz, he has put together three straight good looking wins. The first of them was last summer as he knocked out Luke Rockhold at UFC 239. Then he would face off against another former middleweight in Jacare Souza, defeating him by split decision. In his most recent fight, Blachowicz took on Corey Anderson in a rematch of their 2015 fight that Anderson won. This time, Blachowicz got the win, finishing Anderson by knockout in the first round.

Kicking off the main card will be a featherweight fight between Hakeem Dawodu and Zubaira Tukhugov. Each of them enter the fight coming off recent wins in their last outing. Following that will be a women’s bantamweight bout between Ketlen Vieira and Sijara Eubanks. Vieira looks to rebound from her first loss while Eubanks looks to improve to three wins in a row. Finally, before the vacant light heavyweight title meeting will be a flyweight fight between Kai Kara-France and Brandon Royval. Royval attempts to win his second straight UFC fight in just as many outings while Kara-France also looks for his second straight win.

Follow along with MMASucka as we provide you with the results throughout UFC 253.