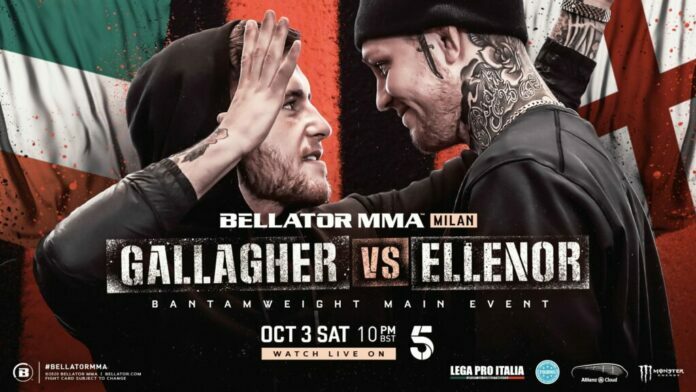 In the second Bellator show of the week, the standout promotion returns with Bellator Milan 2. Still getting used to pre-COVID times, Bellator returned last week for Bellator Milan, with the show having large success. Coming to you from the Allianz Cloud arena, in Italy, this card has a large Irish presence. We take a look at the Irish fighters taking part in Bellator Milan.

The headline fight of Bellator Milan sees Irish star, James Gallagher take on Sunderland’s own, Cal Ellanor. The three-round bantamweight bout is scheduled for the fourth time, having been cancelled three times previously. After each man suffered from an injury and with a whole show being cancelled once, finally, we get to see these two clash.

The trash-talking Irishman stands at 10-1, with his sole defeat coming with a crushing knockout to Ricky Bandejas in 2018. It can’t be argued that he has certainly had the ‘Bellator treatment’, with favourable matches throughout his career. Without a doubt, Gallagher has a solid ground game, submitting five Bellator opponents thusfar. With the new champion, Juan Archuleta recently capturing the belt, the winner of this one could certainly make waves at 135lbs.

Cal Ellanor is just 1-0 in Bellator with a rear-naked choke victory over Nathan Greyson in 2019. With a record of 8-2, Ellanor has never been finished in his professional career, losing twice by decision. Ellanor is also solid on the ground, notching six of eight wins via submission. This will certainly be a tough test for Gallagher and whoever gets the W in this one will position themselves handily in the bantamweight division.

SBG’s Charlie Ward steps back in the Bellator cage for his seventh promotional bout. With a record of 8-4, with two knockout losses in the UFC, Ward is certainly experienced. The heavy-handed Irishman has only gone to a decision once in Bellator, losing unanimously. Other than that lone bout, he has recorded five knockout victories. Relentless is money for Bellator, he always brings it and always puts on entertaining fights. Make sure you tune in for this one as the hard-hitting Irishman will always put on a show.

His opponent at Bellator Milan will be Estonian, Andy Manzolo. Manzolo certainly holds the experience advantage over Ward with 31 professional fights to his name. Standing at 23-8, Manzolo will be making his second Bellator appearance. With finishes in various different methods including knockouts, achilles locks, kimuras and a number of armbars, Manzolo is solid wherever it goes. Expect this one to be a closely contested bout…as long as it lasts.

Arguably the hottest prospect in Bellator returns at Bellator Milan. ‘Big Daddy’, Kiefer Crosbie is certainly the biggest threat you’ve never heard of. Also fighting out of SBG, Crosbie holds a record of 8-1, with his only loss coming via DQ, Crosbie is certainly talented. 4-1 in Bellator, the kickboxing Irishman has solid skills and brings a crazy intensity to every bout. If you haven’t seen his 3.47-minute WAR with Josh Plant in Bamma, do yourself a favour. It was one of the best Bamma fights ever put on. Another man who has benefitted from the ‘Bellator treatment’, Crosbie faces the most experience test of his career.

917, Charlie Leary has a journeyman’s record of 16-11-1 in his professional MMA career. Alternating wins and losses since 2016, Leary’s last four bouts have been under the Bellator banner. Leary’s most recent victory came against the game, Chris Bungard, who also features on this card. It is worth noting that Leary will likely be at a size disadvantage. Crosbie has either fought at welterweight for a catchweight of 160lbs in his Bellator career. Leary is a career lightweight, whereas this one will be at 160lbs.

Ireland’s KO queen, Sinead Kavanagh returns to the Bellator cage for Bellator Milan. The 6-4 featherweight has been a mainstay in Bellator for seven fights. Her biggest win came in her most recent bout against former title challenger, Olga Rubin. On this occasion, a TKO victory in favour of Ireland’s Kavanagh was the outcome. Prior to this, she had a tough test against UFC veteran, Leslie Smith. Although she lost on this occasion, she certainly impressed.

Her opponent, Katharina Lehner is a promotional newcomer. This doesn’t do her experience justice, however. A veteran of two Invicta FC bouts, including one for the bantamweight strap, Lehner is a talent. She also competed on season 28 of The Ultimate Fighter, losing her preliminary fight.

In a fairly shallow 145lbs women’s division, don’t be surprised if the winner of this one gets a big fight off the back of Bellator Milan.

Nearly Time to show how we bring it in @Bellator_Europe @BellatorMMA 👊 pic.twitter.com/TMYtKVvSXM