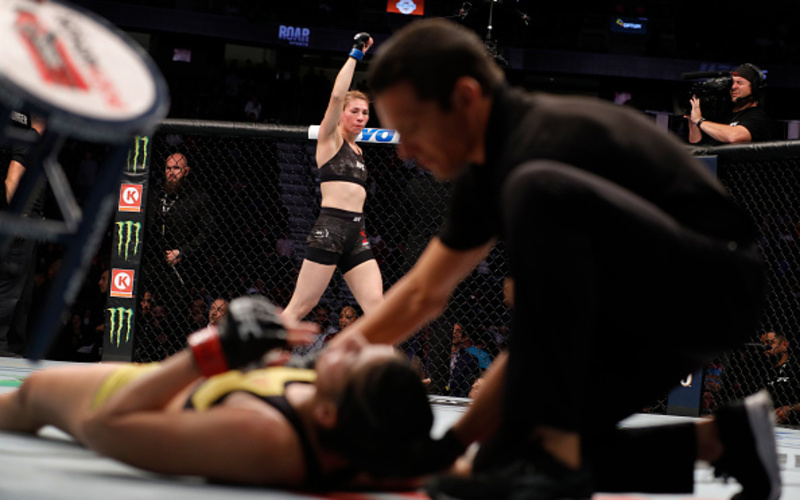 On this week’s podcast at Chaos MMA, we had on UFC’s Bantamweight contender Irene Aldana. Aldana is from Culiacán Mexico and is 32 years of age. She is one of the taller fighters in the bantamweight division standing at 5’9”. Aldana is a striker and is currently ranked #6 in the bantamweight division. She fights for the team Lobo Gym MMA in Mexico. Irene Aldana has a record of 12-5-0 with 6 of those wins coming by KO/TKO and 3 by submission.

Her most recent victory was against Brazilian Jiu-Jitsu specialist Ketlen Vieira at UFC 245. Aldana knocked Vieira out with 9 seconds left in the first round with a beautiful left hook to the chin instantly leaving Ketlen Vieira unconscious.

Aldana recently had a scheduled fight against UFC’s bantamweight contender Holly Holm. The fight was supposed to be the main event on August 1, 2020. However, Aldana tested positive for COVID-19 and the fight was rescheduled for October 3, 2020. Irene Aldana talked more about the fight and her career in the interview below.

We asked her how she thinks the fight will play out with Holly Holm and her response was, “I think it’s going to be a back and forward fight. We are both strikers, but we can take the fight to another area”. This is a big fight for Irene Aldana and this could get her the title shot if she wins. She said after the fight got canceled, the UFC looked for a new date right away.

We asked her about this and what it was like dealing with it. This was her response. “I had really bad days. Feeling bad and having almost all the symptoms of the virus. Headache, fatigue, body pain, breathing difficulties, lost smell, and taste sensitivity. It didn’t go to the point where I needed a hospital, but I had some bad days”. Also, she said training through all of this was hard because she got tired fast because of the virus. She said she is feeling 100 percent now.

Another thing we asked Irene Aldana was if she wins this fight, does she think she will get the next title shot against Amanda Nunes. Her response was simple, “I think so, but for now I’m just focusing on this fight”. Amanda Nunes is currently about to have a fight at the featherweight division, but she is most likely going down to bantamweight to defend that belt against the winner of this fight.

We asked her a few more things and one of them was how quick she would like to get back in the octagon after this fight. The response was, “I don’t know, I’m only thinking about this fight for now. I love to stay active, but I know for now it depends a lot on the UFC and what’s going on at the top of the division”. If Irene Aldana wins this fight, she is most likely getting the next title shot and it will probably be later in the year. The last thing we asked her was her official prediction for this fight. Her response was very simple. “I just see myself winning”.

It was great to interview Irena Aldana and we look forward to her fight in October! Also, thank you to Ricardo Margut, her manager for setting this up for us!