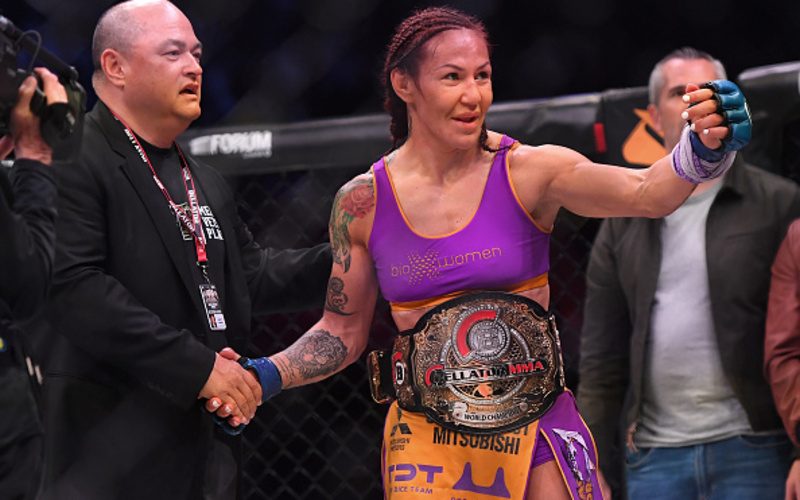 We’ve got your Bellator 249 results and recaps here live tonight. Bellator is back coming at us live with a special Thursday night card. The event features a world title fight between defending featherweight champion Cris Cyborg and the talented challenger Arlene Blencowe. It should be an interesting fight. Cyborg is an absolute monster and Blencowe has won three in a row and six of her last seven fights. She brings outstanding boxing to this fight.

Bellator is rolling out a very intriguing co-main event as well as lightweight star Patricky “Pitbull” Freire will go toe to toe with Jaleel Willis. Willis, the former LFA welterweight champion is making his Bellator debut. Patricky Freire had won five consecutive fights in Bellator before losing against Tofiq Musayev in the finals of the Rizin 20 lightweight Grand Prix. Patricky will be looking to rebound in a big way and get his name back in the mix for the lightweight championship.

Cris Cyborg def. Arlene Blencowe via Sub (Rear Naked Choke) at 2:36 of Round 2

Recap: Cris Cyborg traded shots early with the boxer Blencowe in order to close the distance and get inside. Cyborg got the clinch along the fence and swept the leg to earn the takedown. Cyborg was able to take Blencow’s back and began looking for a rear-naked choke. Blencowe fought it off and made her way back to her feet. Cris Cyborg unloaded with some strikes as the round ended, a round dominated by Cyborg.

Cyborg landed some kicks to open the second round. Cyborg dominated Blencowe standing and looked to have broken her nose before again taking the fight to the canvas with a takedown. Damaging ground and pound from Cyborg who had fought a perfect fight. Cyborg took the back and locked up the rear-naked choke, ending the fight in the second round. Dominant performance.

Leandro Higo def. Ricky Bandejas via Sub (Rear Naked Choke) at 2:32 of Round 2

Recap: Very good round for Leandro Higo who landed some leg kicks and avoided trouble. He eventually got the fight to the mat and advanced to the mount position and set up multiple submissions but was not able to close the show. A solid opening round for Higo and he won it on the cards.

Leandro Higo lifted Bandejas up and carried him across the ring. He scored the takedown and took the back. After a minute of setting up the submission, he locked in a rear-naked choke/jaw squeeze and Ricky Bandejas had no choice but to submit.

Recap: This fight was promoted to the main card after Patricky Pitbull Freire was forced to withdraw from his fight. The two heavyweights have a combined record of 13-2 and Steve Mowry is a perfect 7-0. Mowry did a good job utilizing his length and reach to gain the early advantage. Teed relied on single right hands and landed a few, but Mowry was able to land multiple step-in knees, one that landed flush and dropped Teed. After pausing for a  moment, Mowry landed a couple of shots not on his downed opponent and the referee called a halt to the action. Nice TKO for Mowry.

Recap: This fight was pretty interesting but a low blow brought the festivities to an abrupt close. Saad Awad took a knee to the groin that devastated him. He was on the canvas writhing in pain. After a few minutes, Awad made it to his knees, but he was unable to continue and the fight was halted.

Christian Edwards def. Hamza Salim via Sub (Rear Naked Choke) at 1:28 of Round 2

Da’Mon Blackshear def. Mike Kimbel via Sub (Rear Naked Choke) at 4:14 of Round 2