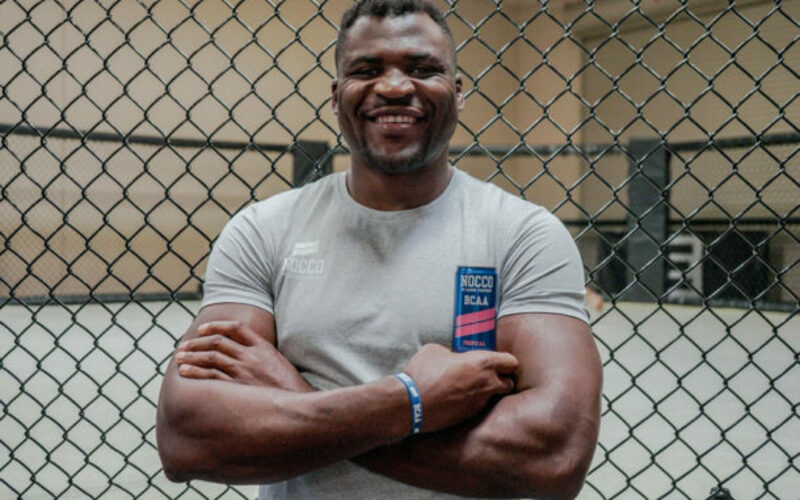 Top ranked UFC heavyweight Francis Ngannou definitely packs some heat with his punches. Dealing with the battle bruises can be tough on the body, so Ngannou has been added as Global Brand Ambassador of NOCCO – the leading no carb, branched chain amino acids (BCAA) beverage company.

“Francis embodies the core beliefs at NOCCO – hard work, perseverance, and conquering adversity to achieve your goals,” said Ben Jones, CEO, NOCCO USA. “Not only has he achieved many amazing career wins, but he serves as an inspiration to athletes from all walks of life, and is perfectly positioned to push our brand forward.”

Ngannou battled adversity from a young age, coming from a home life with little support and education, and developed an attitude of perseverance from years spent working at a sand quarry. After leaving his hometown at age 26 in search for a better life, Ngannou’s journey brought him to Paris, France – where he dealt with illness and homelessness – before finding employment at a boxing gym, where he began his MMA training and career.

“I got into this sport to become the best MMA fighter, and I will,” said Ngannou. “I signed with NOCCO USA because I believe in their brand, their product’s purpose towards athletes, and their message. They understand that determination and drive are necessary to accomplish your goals, and I look forward to inspiring the NOCCO community with this.”

Experiencing firsthand the impact that sports have on one’s outlook and trajectory in life, Ngannou created The Francis Ngannou Foundation to empower children who come from challenged backgrounds. With his foundation, Ngannou is building the first fully equipped gym in his hometown of Batié, Cameroon to encourage children to pursue their dreams by providing access to a safe space and community. With plans to build many more fitness centers, Ngannou and the foundation will create change through discipline and dedication.

In addition to his ranking as the #1 MMA Heavyweight Fighter, Ngannou boasts numerous career wins, ending the Blaydes vs. Ngannou fight in 2018 in only 44 seconds of the first round, and defeating Alistair Overeem with a knockout in what was deemed the “knockout of the decade” in one of the highest profile fights of his career.

NOCCO continues to build their network of talented brand ambassadors. NOCCO is currently available for purchase on Amazon, bodybuilding.com, GNC and at retailers across the country, including select gym and fitness centers.