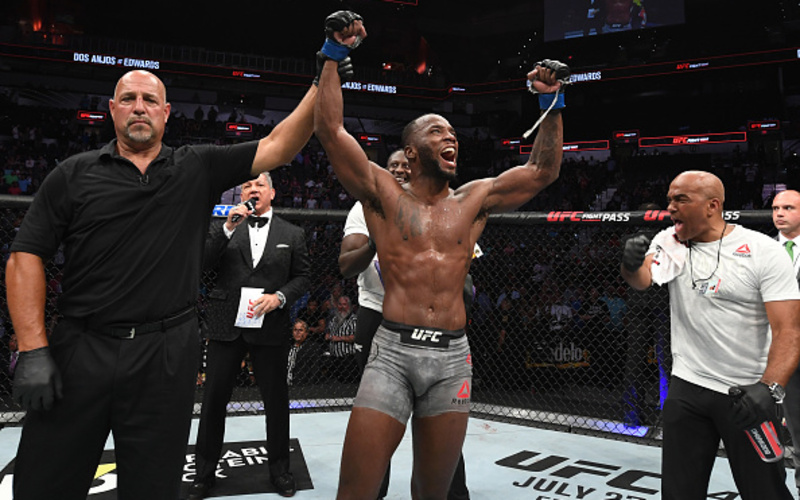 In a bizarre turn of events, shortly after being removed for inactivity, the former #3 ranked welterweight contender Leon Edwards has become the current #3 welterweight contender once more. This comes on the heels of the announcement that Edwards will fight highly touted unranked prospect Khamzat Chimaev. As a result, Belal Muhammad has been removed from his #15 ranking which he held for merely a day.

Edwards was removed for inactivity just a few days ago. The British clinch fighter had spent almost a year and a half on the shelf after a victory over Rafael Dos Anjos. Before the COVID outbreak, he was booked to fight former UFC welterweight champion Tyron Woodley. However, travel restrictions caused that fight to fall through. Woodley has since fought twice, losing to Gilbert Burns and Colby Covington.

Since the Woodley fight fell through, Edwards has called out Covington, Jorge Masvidal and Gilbert Burns. Covington and Masvidal seem more set on fighting each other. Burns, on the other hand, is booked to fight Kamaru Usman. Edwards was however one of many who was called out by Chimaev, and was also called out by Stephen Thompson. Edwards turned both of these fights down, but after the UFC removed him from the rankings afterwards he offered to fight Chimaev, and his ranking was reinstated.

This marks a huge surge in competition for the Swedish prospect Chimaev. He has beaten no ranked fighters in either division he competed in in the UFC, middleweight and welterweight. He has had three fights, though he has taken almost no strikes in any of them. All three fights ended by first round finish.

Edwards, on the other hand, has defeated highly touted welterweights like Dos Anjos, Gunnar Nelson and Vicente Luque. In the normally systematic UFC matchmaking process, this marks one of the biggest differences in elite experience the promotion has seen for some time.