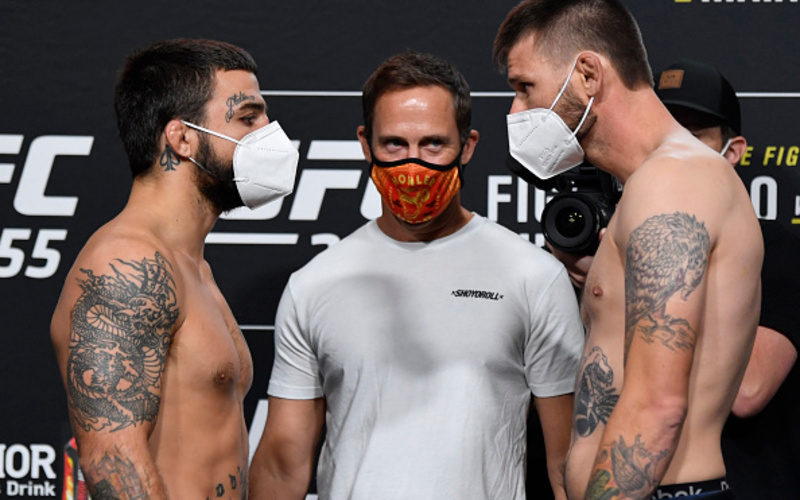 Our second card for MMASucka staff picks this weekend is just around the corner. UFC 255 will take place this evening, November 21 from the UFC APEX in Las Vegas, Nevada. The main card will begin at 10:00pm ET (7:00pm PT) live on pay-per-view.

Make sure to check out our staff picks from Thursday evening’s Bellator 253 event.

Two title fights are official for tonight’s main and co-main event. The featured fight of the night falls in the flyweight division between champion Deiveson Figueiredo and challenger Alex Perez. Figueiredo will look for his first defense of the title after claiming the vacant belt with a submission over Joseph Benavidez in July. The victory came as his 19th professionally, having only suffered one defeat throughout his career. His opponent, Perez, sits 11-1 through his last twelve with a lone defeat to the aforementioned Benavidez. Three straight victories with two “Performance of the Night” bonuses have propelled the 28-year-old to his first title fight with the promotion.

Our second title fight in the co-main event for the flyweight queen Valentina Shevchenko and her Jennifer Maia. Three-time defending champion Shevchenko will look to make it four, lastly defeating Katlyn Chookagian by knockout in February. The well-rounded combat veteran will aims to continue her legacy as one of the greatest fighters in UFC history. Her opponent, Maia, sits at 3-2 in her UFC tenure. The former Invicta FC flyweight champion most recently submitted Joanne Calderwood in the first, now looking to continue her forward momentum against the division’s best.

Check out all our remaining picks for UFC 255 further below.

Check out our staff picks for UFC 255: Figueiredo vs. Perez below.

Staff Records after UFC on ESPN+ 41:

*Note: not all staff pick for every event*
**Note: Bellator 253 picks will be added to above records NEXT weekend**