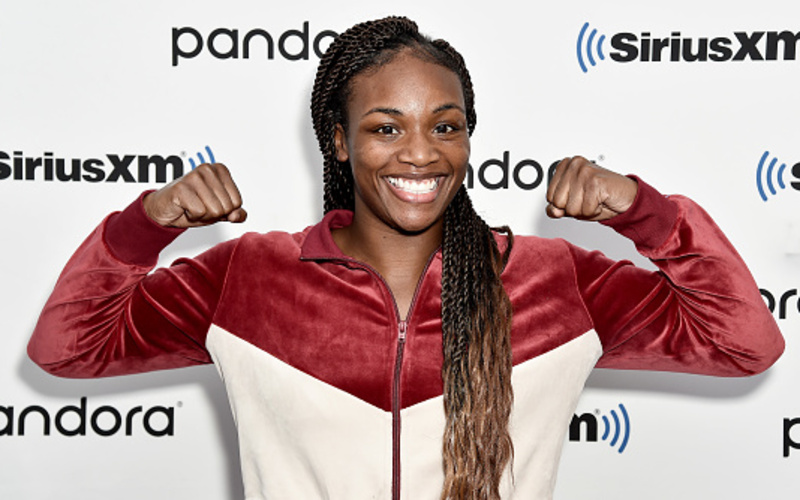 It was recently announced that Claressa Shields, the two-time Olympic gold medal-winning boxer, is making the transition to MMA. She signed a deal with Professional Fighters League (PFL) and it is expected that her debut fight will take place some time in 2021. Fans are already thinking about a potential superfight between Shields and fellow two-time Olympic gold medalist, the judoka Kayla Harrison. For now, though, Claressa Shields is working on her MMA skills at one of the most well-known gyms, Jackson Wink MMA.

ESPN’s Ariel Helwani shared some footage to his Twitter account on Friday of Shields putting in some work at Jackson Wink. In the video, attached below, Shields is working on her boxing, while mixing in some kicks and knees.

Some more footage of @Claressashields training at @JacksonWinkMMA today pic.twitter.com/DW1BUd3z6M

An obvious training partner for Claressa Shields at Jackson Wink is former UFC bantamweight champion Holly Holm. Most known for her boxing and kickboxing background, Holm is one of the best strikers in women’s MMA and could share some tips and knowledge with Shields for making the transition from boxing to MMA. As is the case with all boxers, the biggest difference for Shields will be the introduction of grappling to her fights. Of course, someone with her boxing acumen will mostly focus on defensive grappling. Shields won’t be worried about taking her opponents to the mat, she’ll just be looking to stay on her feet in her fights. Holm is a good training partner in that regard.

Earlier today, Shields shared a picture to her Twitter of herself with longtime UFC light heavyweight champion Jon Jones. One of the smartest fighters we’ve ever seen in the cage, Jones is a great mentor for Shields as she looks to expand her all-around skills as a martial artist.

Only time will tell if the  Jackson Wink partnership winds up being a good thing for Shields’ career. But for now, it’s what she’s working with, and she has some great training partners who will push her and teach her a lot.