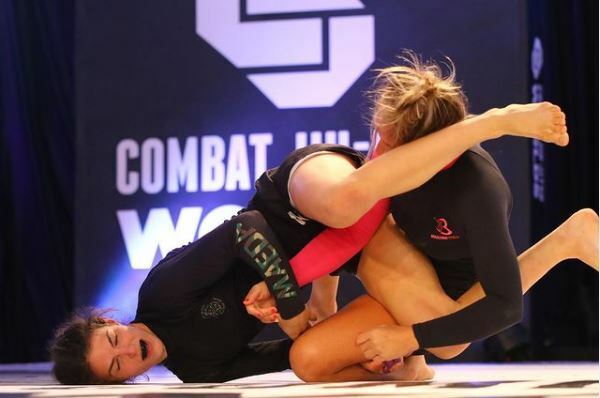 The Eddie Bravo Invitational returns with its second tournament in as many months with Combat Jiu Jitsu Worlds 2020: The Female Flyweights. This event comes live from the beautiful Majestic Resorts in Cancun, Mexico.

For those unfamiliar with EBI tournaments, the rules are simple. There are no points or advantages, with a winner only determined with a submission. If no winner is determined during the 10-minute regulation time, there is are three overtime rounds. Much like Submission Underground, each fighter will be given a starting position in either an armbar position or back control. The fighter that gets a submission from their position quickest is declared the winner. If there is no submission, the grappler with the longest ride time will win the match.

Combat Jiu Jitsu adds an extra wrinkle to the rules- open palm strikes. The strikes can only be made to the body and head once both fighters are grounded. This adds the TKO as a potential method of victory.

There will also be three special non-tournament bouts. Those matches will be headlined by the current middleweight Combat Jiu Jitsu Worlds champion Dan Martinez, who will face BJJ Fanatic champion Kyle Boehm. Also featured will be Tye Ruotolo, a fast-rising prospect on the grappling circuit alongside his brother and Combat Jiu Jitsu Worlds 2020: The Lightweights champion Kade Ruotolo, and EBI, CJJ, and Submission Underground veteran Hunter Colvin. Lastly, Jose Medrano will face Bruno Antonetta in a battle between products of the 10th Planet Jiu Jitsu and Gracie Barra BJJ systems, respectively.

Kyle Boehm def. Dan Martinez via submission (rear-naked choke) with no submission from Martinez, Overtime Round 1

Liz Tracy def. Nikki Sullivan via submission (armbar) with no submission from Sullivan, Overtime Round 1

Jose Medrano def. Bruno Antonetta via submission (armbar) with no submission from Antonetta, Overtime Round 2