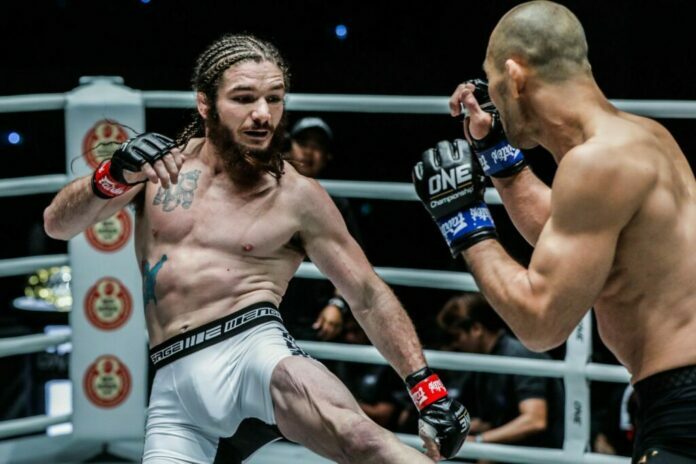 James Nakashima will return to the ONE Championship Circle on Friday, January 22, but it will not be at welterweight. The American will embark on a new journey where he feels he is most comfortable chasing gold.

Nakashima has been a mainstay of the ONE welterweight division. However, his main reason for staying in the division was due to his success that included a dominant victory over Yushin Okami. Following a failed attempt to win the ONE Welterweight World Championship, a bout he was winning until a well-timed knee from Kiamrian Abbasov, he will make his lightweight debut at ONE: Unbreakable.

The former Nebraska Cornhusker is another gritty grappler who makes his bouts dirty. And he has found remarkable success with those skills. In the new division, he should also enjoy a strength advantage, which could elevate his advantage on the mat.

But that thought will be put to the test right away as he meets former ONE Lightweight World Champion and renowned grappler, Shinya Aoki.

The Aoki bout is the perfect opponent for Nakashima’s entrance into the division. As the #4-ranked contender, Aoki offers Nakashima a path to immediate title contendership, and his name value puts a spotlight on their contest.

The matchup with the Japanese star will be, most importantly, a litmus test for where Nakashima stands in a stack division that also includes Christian Lee and Eddie Alvarez. Everyone will get a glimpse into where his overall skill set is right now.

Aoki’s ground game is one of the best in the sport. If Nakashima can survive on the canvas, it will go a long way to highlighting his upper echelon grappling. Or, should Nakashima not want to test those waters, it will force his developing stand-up game to be on display.

Nakashima has honed his boxing at The MMA Lab prior to the global pandemic, but perhaps more importantly, in the development of his standing, he has also trained with Team Petrosyan in Italy.

While the Illinois native may not give fans flashy spinning techniques, his overall game and ability to dominate makes him a deeply interesting athlete to watch compete. As he adds new tools to his game, it not only makes him more dangerous but more exciting to watch.

Aoki will be the stiffest test of his career thanks to the specific stylistic matchup between the two, and the question around where he fits-in at lightweight will be answered on a global stage.

Nakashima’s rise toward the top of the ONE ranks has given him a platform in the co-main event against one of the top global veterans in the sport. He has worked tirelessly to get to this point, and now there is nothing left but to perform and show the world what he has to offer.

Contender or pretender? The world is about to know.