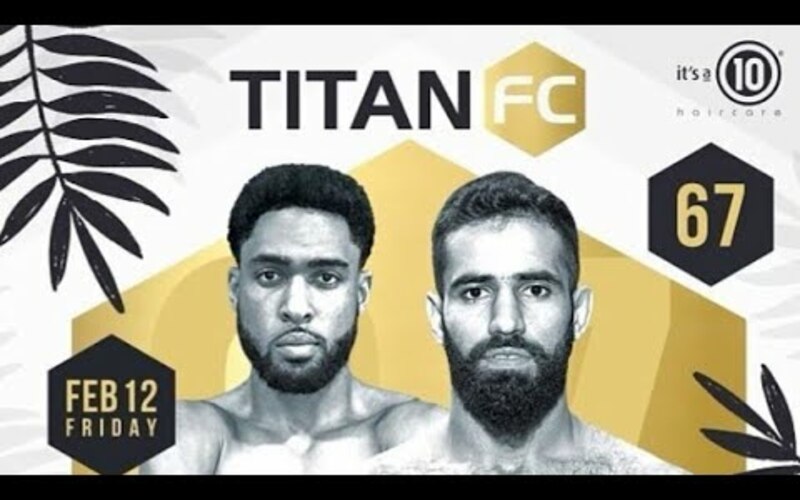 MMA Sucka will have your Titan FC 67 results as they happen this afternoon. The event kicks off live from Miami, FL at 4 PM PST. The card is highlighted by two title fights in the bantamweight and featherweight divisions. The event is being broadcast on FightPass.

The main event is the bantamweight championship bout between Danny Sabatello and Da’Mon Blackshear. However, after missing weight Da’Mon Blackshear can not claim the title with a victory. He weighed in a full three pounds over the 135-pound limit. Danny Sabatello has a 9-1 record as a professional and enters this fight on the heels of a three-fight winning streak. In his last fight, he defeated Taylor Moore on the Dana White Contenders Series but was not awarded a contract.

Da’Mon Blackshear has a pro record of 8-3 and has won back to back fights leading to what should have been a world title fight. However, after missing weight, he is not eligible for the championship. He defeated Mike Kimbel at Bellator 249 in his last fight. .

Muhammadjon Naimov will be taking on Oliver Murad for the LFA featherweight championship. The two fighters have a combined record of 9-1. The winner of this fight won’t just because the champion but will put themself on the UFC’s radar.

Oliver Murad brings his 4-0 record into this bout. Going back to his days as an amateur his combined record is 11-0. He trains at American Top Team and despite his relative inexperience, brings a ton of upside to the cage. The “Warrior of God” will be making his Titan FC debut tomorrow night.

The two title fights at the top of the card both look to be compelling and captivating fights. These cards typically are fast-paced and exciting. The main card looks very entertaining and you can follow us here at MMA Sucka and we’ll have the results live as the action unfolds.

Alberto Montes def. Richie Santiago via Sub (Anaconda Choke) at 2:01 of Round 1

Phillip Jackson def. Daniel Jacobucci via Sub (Tap to Strikes) at 1:59 of Round 1

Roy Echeveria def. Earnest Walls via Sub (Rear-Naked Choke) at 3:27 of Round 1

Sal Guerriero def. Matt Quigley via TKO (Strikes) at 2:22 of Round 2