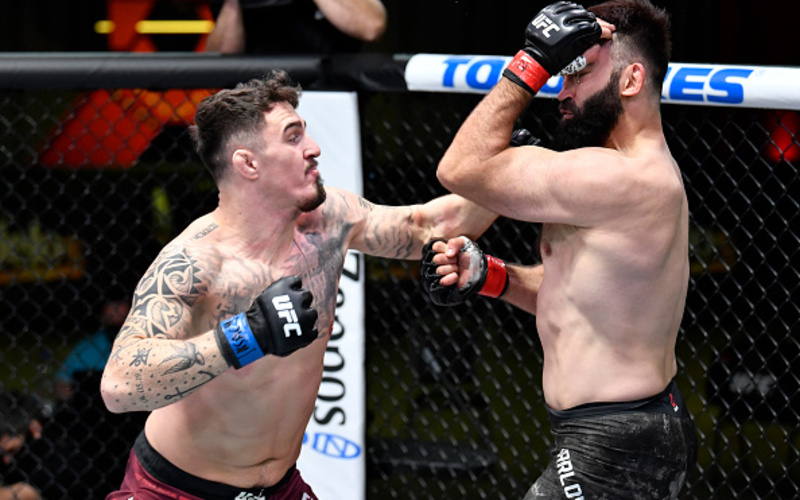 UFC Vegas 19 was a tremendous night of action. The card lost some big fights in the last few days but it still delivered on the action. The card ended up with twelve fights, and of those, eight of them ended via stoppage. There were a lot of options for the UFC bonuses, and four of them walked away with extra money.

Derrick Lewis smashed Curtis Blaydes and picked up a bonus check for his hard work. Lewis landed a perfect uppercut and rendered Blaydes completely out cold. He landed a pair of follow-up shots but at that point, it was moot. Curtis Blaydes was unconscious and Derrick Lewis was on his way up the heavyweight ladder.

Chris Daukaus is the second of three heavyweights to earn bonus money in Las Vegas. He faced off with veteran submission artist Aleksei Oleinik. After fighting off an early takedown by Oleinik, it was all Daukaus. He used outstanding footwork and sharp punches to wobble Oleinik. Daukaus pinned him against the fence and threw a combination that badly hurt Oleinik. The referee called for Oleinik to fight back, but he was unable to and was saved by the referee.

The third heavyweight to take home some extra cheddar is Tom Aspinall who finished crafty veteran and once upon a time UFC champion Andrei Arlovski. Aspinall hurt Arlovski in the first round of their contest with a series of heavy punches. He maintained a good pace and didn’t punch himself out. The round ended and in the second, things escalated quickly. Aspinall quickly took Arlovski down and immediately secured a rear-naked choke and almost immediately Arlosvki tapped. It was a brilliant performance by Aspinall and he has a very bright future in the heavyweight division.

Aiemann Zahabi went toe to toe with Drako Rodriguez and didn’t need a full round to earn a dominant KO victory and a bonus check. Zahabi who was on weight for this fight, gave up five pounds as Rodriguez came in heavy. Not only did Zahabi take a percentage of Rodriguez’s purse, but he also took a piece of his soul, knocking him out three minutes or so into the contest. When you consider Zahabi earned his show money, win money, a bonus, and a percentage of Rodriguez’s money, UFC Vegas 19 went pretty well for Zahabi.

"Chess match on the feet as each looks for the big shot…"@Aiemannzahabi found that BIG SHOT 😳 #UFCVegas19 pic.twitter.com/Pxc6DEul0g