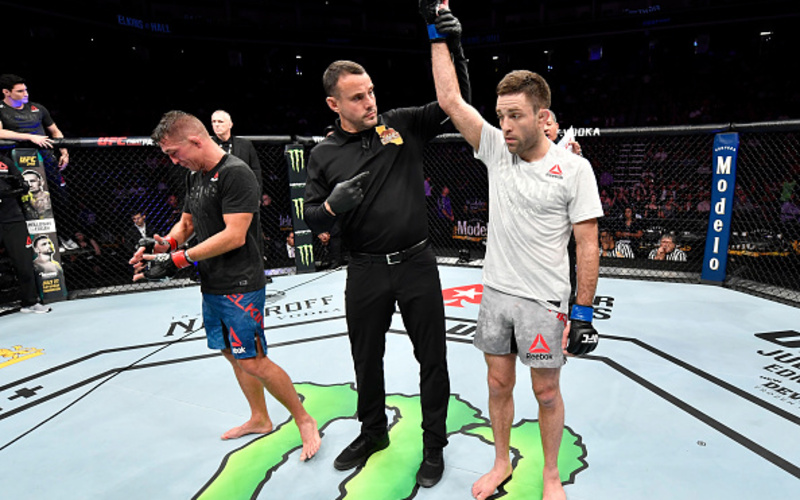 Sadly, a Ryan Hall injury has ended any hopes for his scheduled fight with Dan Ige at UFC Fight Night 187. However, an injury to his hip changed that and he was forced to withdraw. Now, Hall plans to make a return to the Octagon around April and detailed that he was around 12 weeks away from recovery.

It’s been a bizarre but successful MMA career for Hall who ascended from a background in Brazilian Jiu-Jitsu. Although he has a nerdy appearance and calm persona, his professional MMA record stands at 8-1. After losing his first match, he is now on an eight-fight win streak and has beat the likes of BJ Penn and Artem Lobov in the process.

What makes his career strange, however, is the context of his matches and his fighting style. Unlike most modern fighters, he is a mixture of old-school BJJ and modern submission grappling. Here, he will often play possum to lure opponent’s into his deadly ground game and he is also a wizard when it comes to leg locks. However, he is also much more than a grappler and is also solid when it comes to striking with his legs.

Outside of the cage, he’s been known as a tough fight to book due to various fighters supposedly ducking him. Fearful of his unorthodox style, many have ignored his callouts to save their reputation. Ironically, some of his fights have been canceled due to injury. Because of this, the words ‘Ryan Hall injury’ will be met with a certain level of irony from some.

Dan Ige was one of the few that had happily agreed to fight him and it looked to be going ahead. Ige is also a BJJ black belt himself, which would have made this one a fantastic match for grappling fans. To add further spice to the fight, Ige playfully purchased an online DVD of Hall’s to supposedly learn more about his leg submissions.

The result is that Hall’s last fight was now in 2019 and he’s now 36 years old. Whilst there’s still mileage left in his MMA career, the reality is that he’s also getting older and right now hovers just outside of the featherweight top 10 rankings in the UFC. Because of this, if he does want a potential title shot, then he is on borrowed time in terms of making it happen. Unsurprisingly, his career has been met with frustration by his fans, as well as himself at times.

For Ige, the canceled fight also means frustration. As of right now, it is still unknown as to whether he will fight on the card. Ige’s MMA record is currently an impressive 14-3 and would also have had one eye on the UFC title had he beaten Hall. However, for now, it’s back to the drawing board for both fighters.

According to Hall, the injury was sustained in training, as he stated, “I tore my hip flexor. Almost ripped it off the bone when someone accidentally fell on me in training.” As far as injuries go, this isn’t the worst that can happen. However, as the hip area is so large and complicated, it can be invasive on your movement so adequate rest is required. Being from a BJJ background though, this will not be anything new to Hall.

Away from injury, he also mentioned fighting Jeremy Stephens upon his prospective return. Stephens is currently ranked 8th on the roster and would be a considerable victory for Hall if it happened.

Nonetheless, both Hall and Stephens would still have a long way to go if victorious. With the likes of Max Holloway, Brian Ortega, and Zabit Magomedsharipov in front of them, it’s fair to say that the featherweight category is pretty stacked and is no joke.