What’s Next for Amanda Nunes After Easy UFC 259 Win? 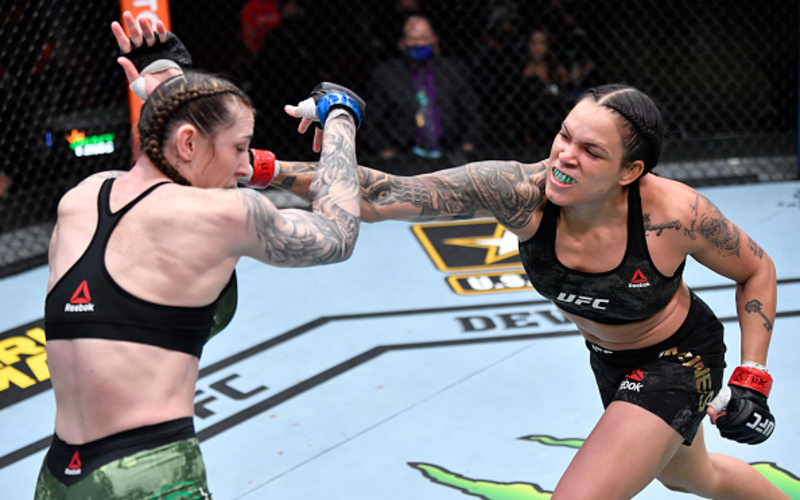 After an easy first-round submission win over Megan Anderson at UFC 259, Amanda Nunes is left with few contenders skilled enough to face her in the octagon. Many fight fans wonder, again, what’s next for Nunes?

Amanda Nunes currently defends titles in both featherweight and bantamweight divisions, the only fighter in history to achieve this honor. Nunes is considered to be one of the greatest fighters in MMA history and possibly the greatest female fighter in the sport.

Julianna Pena called out Amanda Nunes after her submission win over Sara McMann at UFC 257. Nunes ignored the call-out since she was defending her bantamweight title at that time. Pena called out Nunes yet again after her defeat against Anderson.

Now that Amanda Nunes is expected to return to her original weight of 135-pounds, a Pena vs. Nunes matchup could very well be in the works. Nunes seemed uninterested in the fight but told reporters after her win that she would never turn down a fight and would go in the octagon with anyone Dana White put her in with.

After UFC 259, UFC President Dana White told reporters that Juliana Pena had been texting him all night and that, “Yeah. It could happen” when asked about the bout. Pena was scheduled to fight Holly Holm, but we understand that Holm has had to withdraw from this fight.

What’s Next for Nunes in the UFC?

Juliana Pena was slated to fight Holly Holm on May 8. Dana White stated that he wanted to get Nunes back in the ring quickly since the Anderson bout was an easy win.  Since Pena seems to be the only possible contender who can stand with Nunes, look for the two to battle it out in the octagon very soon.

Don’t count on Amanda Nunes retiring from the sport any time soon. She told reporters after UFC 259 that she felt great and loved what she does. She further stated that she feels like she gets better with age.

Without question, Nunes is where she loves to be. Every fighter who steps into the octagon brings their skills, but some bring a little more heart than others. Nunes has the heart of a fighter and certainly belongs in the UFC.

While Nunes hunted of retirement earlier in the year, will likely see her in the octagon for many more fights. Nunes and her wife, Nina Ansaroff, welcomed home a daughter in September. This changed Nunes’ outlook on life and at the time, she told reporters she was unsure what the future would hold.

It seems quite certain now that the octagon is part of Nunes’s future.

The Baddest Woman on Earth

Nunes earned the moniker “Baddest Woman on Earth” since joining the UFC. During her professional career, Nunes has won honors including:

Nunes is widely considered one of the most successful fighters in MMA history and is one of only three fighters ever to hold titles in two weight classes at the same time. What’s next for Nunes when she has achieved so much in her professional career already?

In December, YouTuber Jake Paul called out Conor McGregor. Dana White quickly shut down the idea of that match on social media. Nunes responded by tweeting “I’m in.” Paul said he would never fight Nunes, to which White responded “She would put you in a coma, dude.” Do not look for a bout between Jake Paul and Amanda Nunes (or, anyone in the UFC, for that matter) any time soon.

What’s Next for Nunes in the UFC?

Juliana Pena was slated to fight Holly Holm on May 8. That fight has since been cancelled. Dana White stated that he wanted to get Nunes back in the ring quickly since the Anderson bout was an easy win.  Since Pena seems to be the only possible contender who can stand with Nunes, look for the two to battle it out in the octagon very soon.