Tyson Fury vs Anthony Joshua- The story so far 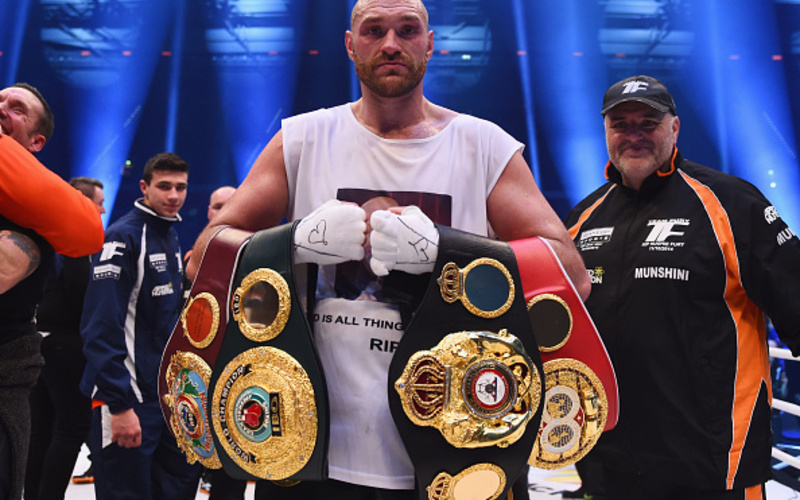 Tyson Fury and Anthony Joshua‘s world heavyweight title showdown has moved a step closer with Joshua’s promoter Eddie Hearn saying a two-fight deal has been signed. As of yet a date and venue is still to be decided in what promises to be one of the fights of the century.

As it stands Anthony Joshua holds the WBA, WBO, and IBF belts whereas Tyson Fury holds the WBC title. The fight will see all four belts contested in a heavyweight bout for the first time with the winner of the fight will earning the status of being the number one fighter and the undisputed heavyweight champion of the world.

The last time any boxer has unified all the belts in the heavyweight division was over twenty years ago when British boxing legend Lennox Lewis held all the belts back in 2000 however that was at a time before a boxer had to hold the WBO belt to be recognized as undisputed champion.

Since 2000, the heavyweight landscape was largely dominated by the Klitschko brothers Wladimir and Vitali, with the pair monopolizing all four heavyweight belts. Vitali Klitschko announced his retirement in 2013 and instead focused his attention on politics whereas his brother Wladimir continued to dominate boxing.

A dynasty is broken

For almost a decade Wladimir Klitschko cemented his status as the dominant heavyweight of his era. From 2004 to 2015 he made a total of 18 successive title defenses. Klitschko had perfected a methodical and effective style with the help of trainer Emmanuel Steward which left his opponents on the back foot and unable to sustain any rhythm in their fights.

All that changed in 2015, when he went head to head with ”The Gypsy King” Tyson Fury. In the past Tyson Fury claimed that many fighters “talked a good game but never actually believed they had what it took to win.” Yet Tyson Fury had been preparing himself for Klitschko for a long time. During training camps as a youngster, he made it his mission to beat Klitschko in every department he even battled it out with him to stay in the sauna longer than the Ukrainian.

Tyson Fury became the first fighter that Dr. Steelhammer didn’t have an antidote for and over the course of twelve rounds. Fury’s awkward style and his faints made it difficult for Klitschko to impose himself in the fight. It was by no means a classic in terms of entertainment but Fury got the better of Klitschko in Dusseldorf and cruised to a unanimous decision.

Anthony Joshua emerged as a hero during the London 2012 Olympics where he won a gold medal. He then became a hot prospect in professional boxing tearing through a host of challenges such as Gary Cornish and Kevin Johnson.

His first major test came when he resumed rivalries with former amateur foe Dillian Whyte. Whyte has beaten Joshua at the amateur level and presented a threat at times during the fight. Joshua was able to overcome his first major test with a knockout in the 7th round. In doing so he gained the British title and would set his sights on earning a World Title belt.

In Joshua’s next fight he would earn his first world title by demolishing American challenger Charles Martin with a second-round knockout. It was at this stage Joshua was viewed as a perfect opponent for Tyson Fury.

As Fury’s life outside of the ring began to spiral out of control due to mental health problems, it became clear that his rematch with Klitschko would not take place. During this time Anthony Joshua had completed a further two title defenses for the IBF belt against Dominic Breazeale and Eric Molina. Such form had created an incredible demand for the young champion Joshua to enter the ring with veteran Wladimir Klitschko.

The passing of the torch

In April 2019, Anthony Joshua faced Wladimir Klitschko at Wembley in front of a post-war record crowd of 90,000 fans. It was a huge fight step up in class for AJ to face someone of Klitchsko’s pedigree.

It proved to be an entertaining encounter and one which was closely fought with both fighters producing knockdowns during the fight. The first came from Joshua who punished the Ukrainian with a flurry of punches in the fifth round. Klitschko may have been 41 at the time but he showed no sign of slowing down in the fight and responded well to put Joshua on the canvas in the sixth round. This time Joshua had to respond and withstand a barrage of pressure. A reinvigorated Joshua eventually secured an 11th round stoppage prompting the Ukrainian to retire from the sport.

Anthony Joshua from that point was seen as the dominant force in heavyweight boxing and went on to defeat the likes of Takam, Parker, and Povetkin. At the time Deontay Wilder was the only opponent standing in the way of Joshua’s dream of being an undisputed heavyweight champion but despite the hype surrounding the fight, an agreement was never reached.

As negotiations between Wilder and Joshua dragged out, a familiar face was remerging from the shadows. In the summer of 2018, Tyson Fury made a shock return to boxing and was in the process of overcoming his mental health demons. In a period of twelve months Fury lost a staggering twelve stone in a bid to return to fighting condition.

Despite his return to the sport, many worried that Fury’s powers would fade due to his absence from the sport and it was expected that “The Gypsy King” would need several warm-up fights before looking to reclaim his throne.

Just six months after returning to boxing, Fury went straight into the deep end and agreed to a deal to fight American powerhouse Deontay Wilder for the WBC heavyweight title. Although Fury had a great skill set and a high boxing IQ, pundits saw Wilder as the favorite. The Bronze Bomber had been the more active fighter and had overwhelmed every opponent he had faced with a record of 40 wins all coming by way of knockout.

In the first fight, Tyson Fury was the superior fighter and was again able to dazzle Wilder with his awkward style and rapid hand speed. Wilder hadn’t always dominated his fight but when his right hand landed it usually sent opponents to sleep.

For most of the fight Fury had made his opponent miss but in the twelve round was struck with a devastating blow. Most fighters would be dazed on the canvas but Fury somehow resurrected from the canvas whilst Wilder was already celebrating his victory. In controversial circumstances, the fight was judged as a draw despite most pundits feeling Fury had triumphed on the night. The performance sent shockwaves around the division and many were keen to see how Fury would fare against Anthony Joshua.

Anthony Joshua’s first defeat came at the hands of Andy Ruiz Jr on his debut fight in the USA. Joshua had been scheduled to face Jarell Miller who was viewed as a routined mandatory victory for AJ. Miller failed a drug test in the build-up to the fight and was replaced by Mexican fighter Andy Ruiz jr.

The fight was viewed as a formality for Joshua who looked in vastly superior shape to the Mexican destroyer at the weigh-in. For the first few rounds, everything seemed to be following the script for AJ, and Ruiz was put down in the third round. Ruiz beat the count and rose to his feet, it was at that moment the tide began to change in the fight and Ruiz was able to expose some of the weaknesses in Joshua’s game by landing a series of powerful combinations. Joshua was put to the floor on four occasions during the fight as Ruiz relinquished him of his heavyweight crowns.

Since the defeat, Joshua was able to avenge his defeat to Ruiz with a comfortable unanimous decision victory over Andy Ruiz. The performance was disciplined with AJ using his jab effectively to keep the Mexican at distance. In the second fight, Joshua looked much more assured defensively and controlled the fight. Andy Ruiz on the other hand looked sluggish and was carrying a great deal of extra weight in the second fight.

The Rematch- Fury vs Wilder

Tyson Fury and Deontay Wilder met for a second time in the final big boxing event before Covid 19 brought the nation to a standstill.

In the build-up to the fight, there had been scrutiny surrounding Tyson Fury’s plans to change his approach. Tyson Fury left former coach Ben Davison and appointed Sugar Ray Steward in an attempt to be more offensive in the fight and force an early knockout. Many felt such an approach would be naive when facing up to one of the division’s greatest knockout artists.

The decision proved a masterstroke and Fury was able to dominate every moment of the rematch and essentially bully Wilder with a series of fast combinations. Wilder was struck with a brutal blow to his ear which damaged his equilibrium. Wilder struggled to stay on his feet throughout the fight and his team was forced to throw in the towel during the seventh round of the fight.

This fight promises to be one of the biggest fights in British boxing history and the biggest heavyweight fight since Mike Tyson faced Lennox Lewis. Both fighters are in the prime stages of their career and have an opportunity to cement themselves as world number one.

Both are opposites in terms of their styles and personalities. As a fighter, Tyson Fury has the movement that would trouble any fighter. At 6ft 9 Fury is fast on his feet and can dominate fights with his jab and fast reflexes. He describes himself as an American-style fighter mixed with European strength and conditioning. Fury is loud and often outspoken he makes a habit of trash walking his opponents and getting under their skin. As we have seen with Klitschko when he turned up to the press conference as Batman.

Anthony Joshua often fights on the front foot and is aggressive in the way that he searches for a knockout. Like Deontay Wilder he possesses immense punch power however technically he is much more well-polished than The Bronze Bomber. AJ is a fighter that is much calmer in his approach and he rarely taunts his opponent in the same way we see Tyson Fury.

What makes this fight particularly interesting is the fact that in recent fights we have seen both fighters revert from their normal styles to win in a rematch. In Fury’s case, we saw him fight in a much more aggressive style than we have seen in the past. Whereas Joshua was happy to keep the fight at distance with Ruiz and use his movement and jab to keep the distance from Ruiz. Will we see these fighters continue this approach when the pair come head to head.

This fight will be tough to call and bookmakers are predicting a 50/50 split between Fury and Joshua on bets for this fight. Both are incredibly talented fighters however, I feel Tyson Fury is a more well rounded fighter than Joshua and if he is to continue to show the form he had against Deontay Wilder I believe he will be able to get a knockout in the later stages of the fight.