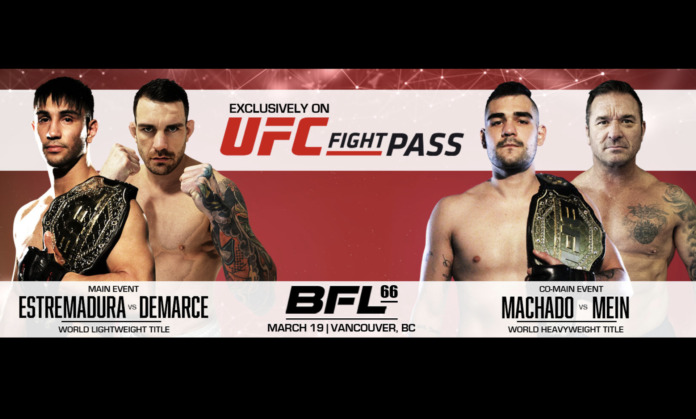 The return of the longest-running British Columbia-based MMA promotions is upon us. On Friday, March 19, Battlefield Fight League returns to Vancouver for a stacked fight card. We will have full BFL 66 results for you all night long.

There are two title fights on the eight-bout fight card.

The main event features a battle for the BFL lightweight championship, as undefeated champion Achilles Estremadura (6-0) takes on veteran Curtis Demarce (18-15). Estremadura is known for his precise striking and insane takedown defense. He has shown that he can not only knock his opponents out on the feet but take them the full five rounds as well. Demarce has a ton of fights under his belt but has not stepped inside the cage since November of 2019. The 32-year-old is 1-3 in his last four fights.

The heavyweight title is on the line in the evening’s co-main event, as champion Caio Machado (3-1-1) takes on Lee Mein (11-14). Machado has shown progression over the course of his five professional bouts. He has relentless pressure on the feet and cardio for days, which is unheard of from heavyweights. The FKP MMA product is riding a two-fight winning streak, with his most recent victory, a majority decision against Justin Doege at BFL 64. Mein has been an active competitor for over 20 years and is currently riding the best run of his MMA career. The 53-year-old is 5-1 in his last six fights and riding two straight stoppage victories.

BFL 66 goes down on Friday, March 19 from the Granville Island Stage Theatre in Vancouver, Canada and airs live and exclusively on UFC Fight Pass at 6 pm PT/9 pm ET.

Check out full BFL 66 results below.