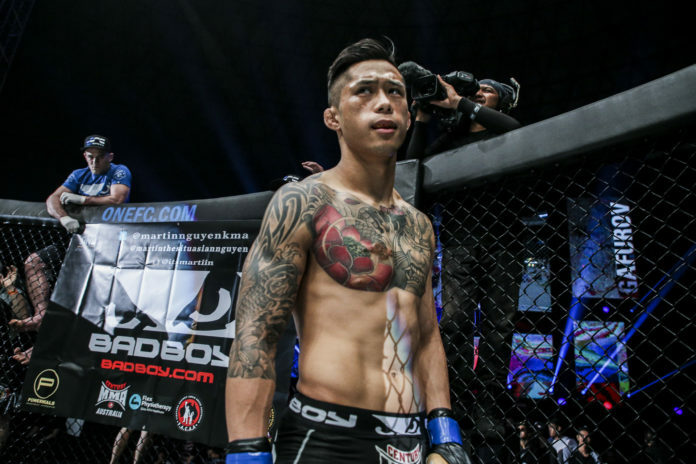 Martin Nguyen steps up when no one else will. He has been called out by every fighter in multiple divisions, over multiple promotions and he just keeps bringing the heat.

He was born and living the Australian dream as a youngster. His parents had escaped the Vietnam war and established themselves in Sydney, Australia. They provided for “The Situ-Asian” and let him live carefreely.

Many sports were in the ultra-athletic child’s life, but ultimately Rugby was his passion. A number of dislocations of his right shoulder forced him off the field and that was when he found MMA. Well, jiu-jitsu was the start of things, but MMA quickly followed.

“I started with jiu-jitsu and it kind of worked in my favor in terms of takedowns, like top pressure, because that’s what we used to do in rugby — tackling. Hand and hand it worked well, the only thing I was lacking, A the cardio and the technique in my movements in terms of hip escapes and stuff and my flexibility. I was like a sponge man, as soon as I started in jiu-jitsu, I just wanted to learn and learn and learn and progress as fast as I can. The rest is history.”

Just months after beginning his journey into the sport, he fought for the BRACE MMA featherweight championship. Little did he know, that would lead to a signing with Asia’s largest MMA promotion ONE Championship.

“Those two months I remember clearly because I had started my professional career when I was 21, so within the 10-months from when I signed to when I started, I had had two pro MMA fights,” Martin Nguyen explained the beginning of his MMA career. “There was a promotion called BRACE MMA in Sydney and the featherweight champion, I think was Nick Honstein, he moved back to America and he couldn’t defend the title, so we were fighting for the vacant title. The guy that he was meant to fight, Luke Standing was a promising standout at the time. He had prepared two camps for Nick and both fights fell through, so when they had offered me the title fight, for the featherweight title against Luke Standing, he was like 4 or 5 and 0 at the time, I was like, ‘I’m only 2-0, but I’ll take the fight.’ I went 8-0 as an amateur so in terms of cage time, I was pretty familiar with it and so I took the fight at 2-0 for the BRACE featherweight title. Little did I know that BRACE had signed an affiliate with ONE Championship and the winner of that fight, no one knew the winner of that fight got a contract. I finished that fight in the first round and was presented the contract.”

He racked up a number of wins and eventually had the opportunity to become a two-division champion. There were never thoughts of this in the first place, in fact, he likely won’t be doing that again. But he earned both the featherweight and lightweight championship and he claims one of the most famous MMA fighters on the planet is to thank for those accomplishments.

“Hell no, hell no,” Martin Nguyen tells MMASucka that the two-division champion was never in his sight. “The ultimate goal was to get that title and I was on somewhat of a streak. My second fight in ONE Championship was for the title and I was blown with emotions, I didn’t know what to do, what to expect, losing to a Russian guy [Marat Gafurov] who was like killing everybody basically and sure enough that loss, my first ever loss made me refocus and recoup to what the levels were and where I needed to be. So I worked hard, I won my fights, I got the rematch and I did win the title. We were saying because I was preparing for that fight, I was very very light in my weight and I was like, man I can go down a weight division. I never really thought of champ-champ status or two-division champion or two belts in particular until Conor [McGregor] had done it and I was like he had done it in one promotion and I was in another promotion. The offer was presented to me and I was like I’ll take it with both open hands.

“Been there done that. It doesn’t motivate me to get back in there. What motivates me is just being able to win and provide for my family.”

His home for the past few camps has been Deerfield Beach, Florida. He made the transition to Sanford MMA with a number of his fellow ONE combatants and realizes just how much his game has grown since moving the camp from Australia to Florida.

“I was training out of a small gym in Liverpool in Sydney, Australia my whole career and I thought because I had won two titles out of this gym, I don’t need anything extra,” Martin Nguyen talks about the transition from Australia to Florida. “But, I felt like I was trapped or I just did enough for the fight, which wasn’t good enough. I felt like I wanted to get better, I needed to get better, the competition was getting better and I was being left behind. I was invited by my friend Aung La [N Sang] and coach Henri [Hooft] to come here for a camp and that was out of my comfort zone because I was leaving my family, I’m not used to being apart from my family. My wife pushed me out of the circle, my coach at the time pushed me out of the circle as well and I’ve never looked back since. The room is full of killers, crazy experience, the best people around you who want the best for you and push you every day to be a better person in general.”

Unfortunately, in his last outing, Nguyen lost the featherweight championship to Thanh Le. It was a back and forth battle, with Nguyen looking to be in control for the most part. However, a very small, untimely mistake proved to be the worst, as Le was able to capitalize and drop the champion. This was the beginning of the end for Nguyen.

He looks back on that fight and is able to reflect on the mistake of what went wrong and is clear that if they do run that fight back, the end result will be much different.

“Most definitely,” a rematch for Martin Nguyen and Thanh Le is not out of the picture, he explained. “Regardless of running back the fight or not, you do learn the most out of a fight when it comes to a loss. When it comes to that fight, in particular, the amount of times I’ve counted how many things have gone wrong, it did. In saying that, I’ve just got to take it as it comes, the guy came and he won. He now holds the title and he’s doing his thing. For me, I just have to focus on myself, recoup and do whatever I need to do to keep winning and eventually I know we’ll cross paths and when we do it’ll be a different fight.”

At ONE on TNT II on April 14, Nguyen will face Jae Woong Kim. The Korean is a fighter who called Nguyen out following his last victory, but that didn’t faze the former champ. He will take all comers. He is a true company man.

Martin Nguyen vs. Jae Woong Kim at ONE on TNT II

“He called me out and ONE Championship gave me the contract with my name on it. I don’t really respond to callouts or people talking trash,” Martin Nguyen explains how trash talk means nothing to him. “I’ve been called out my whole life since I’ve been at the top since I’ve had the title for three years, everyone is calling me out, even people from different promotions. I didn’t really care. You can talk and say as much as you can, but it doesn’t mean anything until your name is on the contract in front of me and I’m signing it. Whatever contract ONE Championship has sent me, I’ve never denied it. I’ve just kept signing it.”